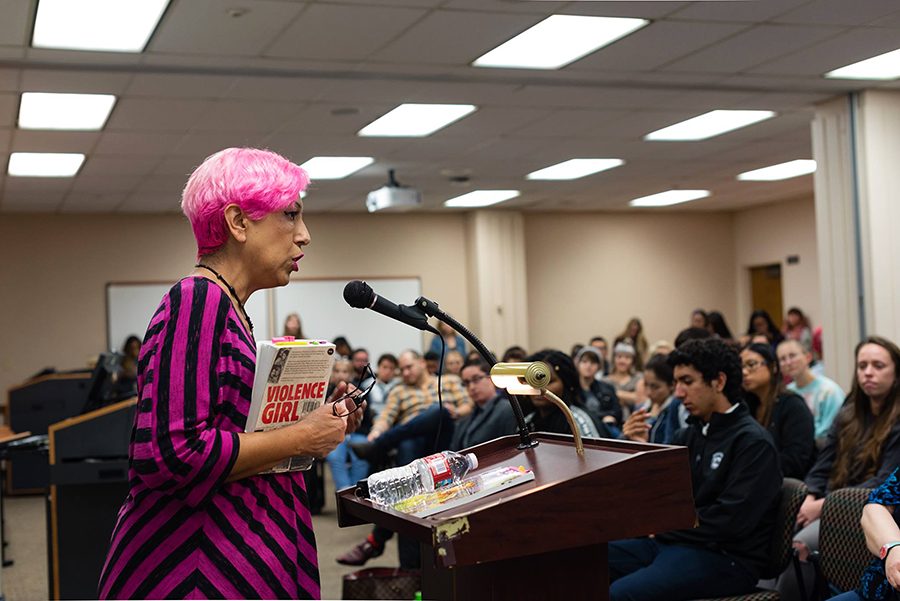 In addition to being a feminist author, Bag is also a former teacher and musician.

Bag is the former singer of The Bags, which was a leading band of the punk movement in Hollywood.

The Bags were popular during the 1970s, even appearing in a documentary about the Los Angeles punk movement called, “The Decline of Western Civilization.”

Bag said she named her book “Violence Girl” because violence seemed to be something that was a part of her life from an early age.

“I think at a certain point in my life, I figured out how to take the anger and rage that was inside of me and turn it into energy that could be channeled in ways that I chose to channel them,” Bag said.

Bag spoke about her experience growing up amongst the Chicano movement in east Los Angeles and how it inspired one of the stories in her novel titled, “Chicano Power.”

“This story is from when I was eleven years old. At the time, my experiences with the Chicano movement was zero,” Bag said. “I really didn’t realize that I was part of a minority group because I grew up in east L.A. and everybody around me looked like me. I hadn’t yet noticed that the positions of power were not reflecting me.”

Bag said she did not become politically involved as soon as she had liked to, due to her feelings of isolation during her early years of high school.

“I was kind of a weirdo like I am now, except I was younger, so people’s opinions really hurt me,” she said. “I remember being in high school and wanting to be part of the Chicano movement at my school. I went up to try to join MEChA one day and the people that were sitting at the table laughed at me and I was hurt and walked away.”

However, Bag said she later found acceptance with other like-minded young people living in Hollywood in 1977. Soon after meeting these friends, Bag formed her first band, The Bags, and started to enter the punk scene.

“One of the reasons I enjoyed being a part of the punk community was that I had rage that had not been released and I had things to say that I had not been able to say. I realized it right on stage.”

Bag said her performances and the way she was able to move the crowd and affect people helped her realize that she could impact people in a much bigger way.

“I remember this one specific instance. I’m singing and I know that if I dance harder, people are gonna dance harder. If I move over here, they’re gonna be looking my way,” she said. “I knew that I was controlling this situation and I looked out into the darkness and I had an epiphany. I realized that what we were doing in that room, working together and feeling together could happen on a much, much larger scale.”

Bag ended the event by talking about her teaching career and how she was driven by her own experience in public school as a non-English speaker.

“Until I was five, I basically spoke no English. This is why I wanted to teach students in similar situations. I wanted to validate their culture and make them feel comfortable.”

Yetta Howard professor in the department of English and comparative literature brought Alice Bag to SDSU after teaching her memoir in her graduate seminar, Auditory Cultures and Sound Studies.

Howard said she thinks the event was very successful due to the fact that it was a standing room only crowd.

“I think bringing people like Alice Bag to campus allows students to see a first-hand example of what they can do and achieve,” anthropology sophomore Gavin Smith said.

“It was nice to hear her experiences with the movement and the punk scene, how it shaped her life choices and that she never once regretted doing what she did in that time of her life,” advertising sophomore Alexis Millias said. “Listening to her read from her memoir and belt out a couple lines lines from her songs was really cool too.”