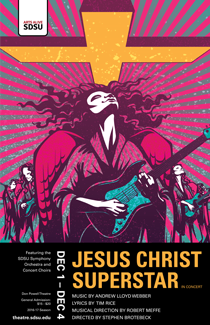 Courtesy of the School of Theatre, Television and Film

Theater buffs and rock music fans alike were delighted with a captivating and spectacular performance over the weekend.

San Diego State’s School of Theater, Television and Film and School of Music and Dance collaborated to put on Andrew Lloyd Webber’s timeless musical, “Jesus Christ Superstar in Concert” in the Don Powell Theatre Dec. 1 to 4.

The popular musical, directed by Stephen Brotebeck and Robert Meffe, takes the audience through the last week of Jesus’ life through modern jargon and and rock music.

The musical’s rendition of the well-known, phenomenal events that took place during Jesus’ last week is unique, as the story is told from the perspective of Judas Iscariot, the apostle who betrayed Jesus in the end.

The performance was equipped with live music from the SDSU Aztec Concert and Chamber Choirs, directed by Patrick Walders and the SDSU Symphony Orchestra, under the direction of Michael Gerdes.

The concert was psychedelic, to say the least. Colorful and dazzling lights beamed on the audience throughout the performance.

The lights were in sync with the music and various grand guitar solos.

It was easy to forget that you were, viewing a musical instead of at an intense rock concert.

The audience was transported back to the 1970s with the sounds of psychedelic rock. However, the actors on stage were dressed in contemporary clothing.

Director and head of the SDSU MFA Musical Theater program Robert Meffe addressed this as he opened up the show.

He mentioned that the actors would not be in traditional biblical clothing, but modern clothes, as the lessons in “Jesus Christ Superstar” are still relevant today.

The musical showcases the reality of rising to fame and how one man can be a superstar one moment, and condemned the next.

Students can relate to the ideals about peer pressure and betrayal throughout the musical, as these situations are easily applicable to college life.

The musical contains no spoken dialogue and is sung-through by SDSU’s own students.

Most of the students in the production are first year graduate students, with “Jesus Christ Superstar in Concert” being their first production.

This came as a shock, considering the fact that each actor looked so comfortable and natural on stage.

It felt as if the crowd was on an emotional rollercoaster as it experienced each and every feeling that the actors exhibited.

The protagonist of the play is, Jesus Christ, played by Tug Watson. Watson gave an extremely raw and stunning perfomance.

“I was blown away by the performance of Jesus,” mechanical engineering junior Jessica Roesgen said. “His voice was incredible and I really enjoyed the show.”

Although the musical focuses on Jesus and Judas’ relationship, other biblical characters are included as well, such as his apostles, the high priests who persecute Jesus, Pontius Pilate and King Herod.

Additionally, Mary Magdalene is the female lead who begins to develop romantic feelings for Jesus.

First year graduate student Dominique Evans played the role of Judas. Getting into this role was difficult for him, as he had to struggle to find the good within Judas.

“Judas is a very misunderstood character, who is trying to do something that he believes is right,” Evans said. “He felt like he was really trying to save his friend. The hardest part for me was trying to find the good in someone that was constantly doing bad, you know what I mean?”

The cast performed renditions of the classic soundtrack to the musical.

By the end, the audience could be heard singing along to the more repetitive songs.

The cast, the SDSU Aztec Concert and Chamber Choirs and the SDSU Symphony Orchestra were a remarkable collaboration on stage.

Evans  said he enjoyed performing “Heaven on Their Minds” and “Superstar” the most.

“‘Heaven on Their Minds’ is the first time that you get to really see everything through Judas’ eyes,” Evans said. “Judas is like, ‘Listen, I am your best friend and I am on your side…You’re getting so far off course that I don’t even know how we can recover from this.’ I love the message in that song.”

Evans said he had the most fun performing “Superstar” on stage. It’s one of the first times the audience gets to see Judas letting loose and less aggressive.

“(Judas) was so conflicted, but once ‘Superstar’ happens he could just let everything go,” Evans said. “The weight of the world was off his shoulders.”

Whether religious or not, “Jesus Christ Superstar” is an extraordinary musical and one-of-a-kind experience.

There are not many chances to witness Jesus Christ as the center of a rock opera and musical production, surrounded by electric guitars and elaborate light shows, which is what makes this musical so noteworthy.

Meffe and Brotebeck encouraged the cast to think outside of the box during this production.

“They have made us raise ourselves to a whole new level, which I really appreciate,” Evans said.

It was easy to see from the crowd that the cast of this production has a close bond. Their chemistry was undeniable on that stage. Evan describes his experience working with Watson as electric.

Although the performances of “Jesus Christ Superstar in Concert” have ended, the School of Theater, Television and Film is still hosting events through the end of the semester including the Fall Emerging Filmmakers Showcase on Dec. 21.