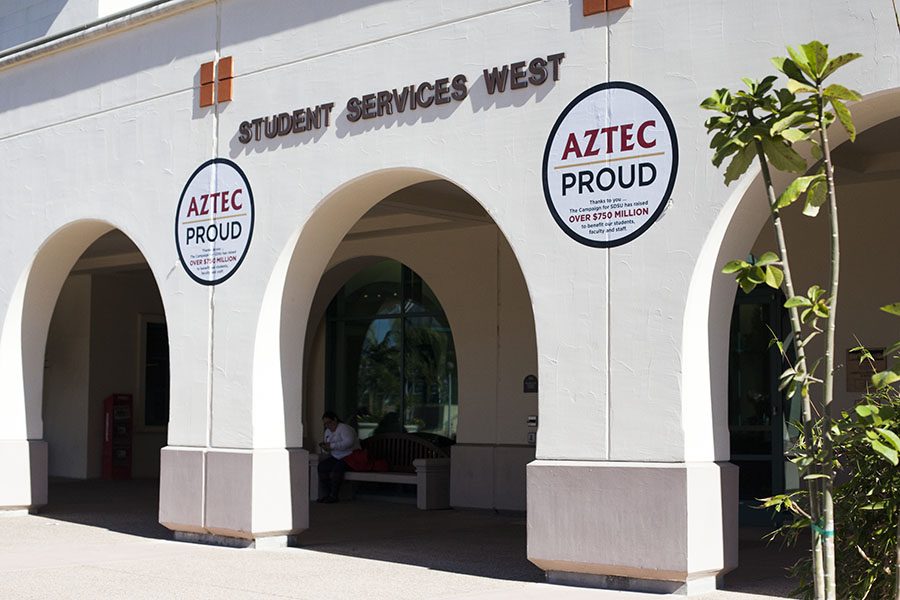 Student Services West, where the Office of the Registrar is located. Registration dates for students will be moved up beginning summer 2018.

San Diego State continued to attract many students in fall 2017 and received more than 83,000 undergraduate applications for the second year in a row.

The applications consisted of 59,920 incoming freshmen and 22,755 transfer students.

Director of Media Relations Gina Jacobs said because of the amount of applications, admission into SDSU will be more competitive.

“Those who are admitted will be exceptionally qualified and poised to be successful SDSU students,” Jacobs said. “The Fall 2017 incoming class will join an already high achieving student body,” Jacobs said.

For Fall 2016 admitted freshmen, the average high school GPA was 3.85. The average ACT score, not including writing, was a 27, and the average SAT reasoning score was an 1174. This only included critical reading and math.

Students need to take a certain number of years of specific classes as part of the A-G requirements in high school.

“We would want them to complete those courses and be as competitive as possible,” Diaz said.

Diaz said students should try to beat the 2016 averages.

Cook said students compete against each other based on their major.

She said there is even a bigger priority to local transfer students.

Transfer students must turn in a supplemental application in addition to the CSU mentor application in January to demonstrate what they did in the fall and what they plan on doing in the spring.

“It’s not ranking them by GPA,” Cook said. “We’re looking at the actual courses they’re going to have completed by the time they transfer here, which is most important.”

Child and family development freshman Andrea Hernandez had a 3.8 GPA in high school. She said she fell in love with SDSU after visiting it because the people were genuine and friendly.

“I met with my major advisors, and it was nice to talk to the people I’d be acquainted with,” Hernandez said. “I didn’t get that same connection with the other schools I applied to.”

SDSU has also climbed up in rankings under U.S. News & World Report’s America’s Best Colleges. It is ranked 74 among public universities in the U.S. and 146 overall in the U.S.

The overall number has increased by 37 since 2011.

“The growth SDSU has seen in national rankings can be attributed to our improving graduation rates, our high continuation rates and the excellent student support and academic programs we have on campus,” Jacobs said.

SDSU President Elliot Hirshman told SDSU NewsCenter the interest in SDSU is due to the faculty and staff, its national reputation and the accomplishments of alumni and students.