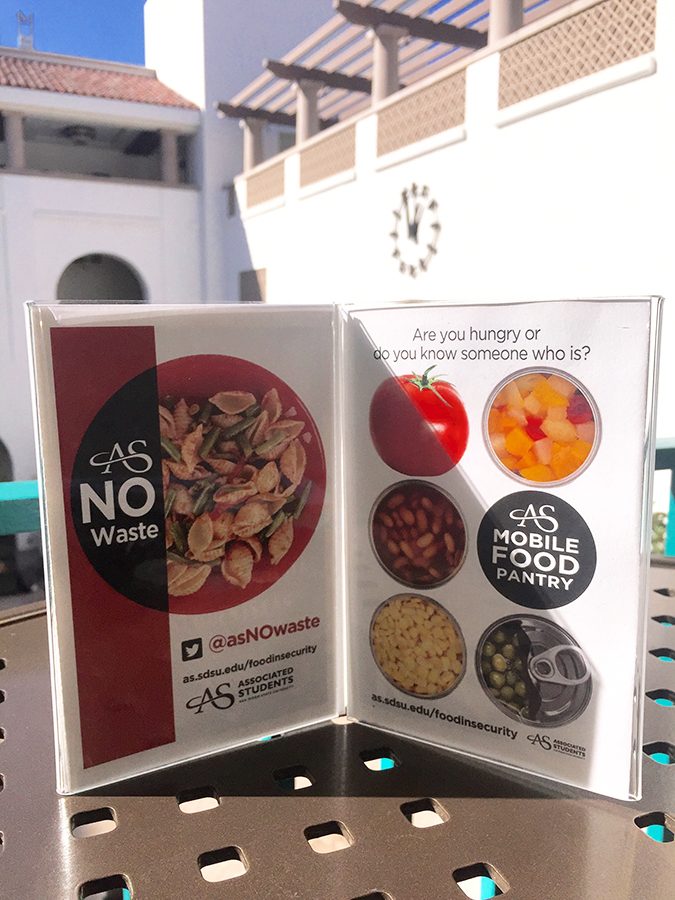 In effort to address food insecurity at San Diego State, as determined by a study from the California State University, Associated Students is continuing to implement two resources for students this semester: a mobile food pantry and a no-waste initiative.

“(Eleven) out of 23 schools have some sort of system whether it was a food pantry or a catering initiative and we weren’t one of those (eleven),” said Chimezie Ebiriekwe, Associated Students vice president of university affairs.

“As for San Diego State being a pioneer of a university in the CSU system, I knew that this needed to be implemented because we were behind schedule,” he said.

What are Associated Students and the university doing to combat this?

Ebriekwe said the university has a credit with the San Diego Food Bank and any food donated to it from the Aztecs Rock Hunger drive can be requested and used for the mobile food pantry.

“The food that was donated through Aztecs Rock Hunger will now be recycled and brought to actual Aztecs, actual students,” Ebiriekwe said.

The mobile food pantry is held at the campus farmer’s market and second floor of the Conrad Prebys Aztec Student Union every Thursday.

He said there is information about the Economic Crisis Response Team and CalWorks food stamps for students in need.

“This is not your average tabling event,” Cabral said. “When we are talking about food insecurity it’s a little bit more sensitive. People are being a little bit more vulnerable with you coming up and saying I do need food because I’m hungry.”

The A.S. No Waste initiative is a push-notification alert through Twitter that tells students when there is leftover food from campus events, such as the “Giving Thanks” dinner held on Nov. 17.

David Castillo, a management information systems junior, said he and his friend Stefan Isensee, entrepreneurship junior, were happy about the free food provided at the event.

“I would use it and I think there would be students who use it,” Castillo said of the A.S. NoWaste notification. “Food is expensive so there’s time when you don’t eat and just go study in the library to get some more hours in.”

Castillo said A.S. should hold more events like the “Giving Thanks” dinner because there is a fellowship with a lot of different students from around campus.

“Operations staff who were present at last semester’s events shared that students were excited about the opportunities for free food and to help reach students who may be experiencing food insecurities,” she said.

A.S. hosts Aztecs Rock Hunger each year to help raise funds to feed the San Diego community, but hungry students on campus are often left out.

This year, the food and donations raised from Aztecs Rock Hunger will be donated to the Jacobs and Cushman San Diego Food Bank and returned to the university as a credit.

The amount raised will be given back to SDSU students through the mobile food pantry each Thursday.

He said 20 percent of the monetary donations from ARH will go to the Economic Crisis Response Team to help students in need of resources like CalFresh.

The CSU study conducted in February 2015 reported about one in four students from its 23 schools are food insecure, meaning they lack resources to access food due to little or no financial funds.

Eleven of the university campuses have resources for food insecure students that include food pantries, CalFresh enrollment programs and meal assistance programs, according to the study.

The study at the time revealed that the only current funding option for SDSU students who faced food or housing insecurity was a short-term loan of $1,000 with varying repayment options through Student Account Services.

In a survey conducted by The Daily Aztec of 70 SDSU students and alumni last semester, 74 percent of students said they have skipped a meal while on campus and 90 percent have chosen an unhealthy option at a campus dining or Aztec Shops location to save money.

Thirty-four percent of these students said they have been food insecure in the last year while enrolled at SDSU and 17 percent said they are currently food insecure.

Many students surveyed did not know what the Economic Crisis Resource Team was or the services it provided.

Thirty two students in the survey said they would use a food pantry if provided. Twenty-four said they were unsure.

An Economic Crisis Response Team was implemented at SDSU in fall 2015 to provide students with resources in case of financial crisis.

Since Oct. 22, 2015, 115 students have submitted requests for support to ECRT, six of whom were facing food insecurity, Vitaliano Figueroa, assistant vice president for student affairs, said in an email.

to mobilize quickly to coordinate our campus resources to support the needs of our students faced with unforeseen crisis that can impede their success at SDSU,” Figueroa said in an email.

The team is a collaboration of staff, administrators, students and faculty on campus who work to provide students experiencing food insecurity, or housing insecurity or financial crises with short-term and long-term aid.

The ECRT also volunteers at the mobile food pantry and said they collaborated with AS on the new programs to help students.

“If a student is facing a financial crisis that leads to food insecurity, the Economic Crisis Response Team has partnered with Aztec Shops and Associated Students to provide meals on campus for up to two weeks,” Figueroa said.

Future studies by the CSU

The survey includes questions about financial and ethnic background, university status and knowledge about resources available for home and food insecure students at the university they attend.

Maguire said she will begin conducting a program implementation and evaluation study of promising practices within the CSU for best serving students experiencing food and housing insecurity and homelessness once the results of the survey are complete.

What is next for SDSU?

Associated Students will continue to hold the mobile food pantry at the farmer’s market and second floor of the union each Thursday.

The Jacobs and Cushman San Diego Food Bank held a meeting for different colleges to come together and introduce them to its College Hunger Relief Program on Jan. 13.

Along with Southwestern College, San Diego City College and UC San Diego, San Diego State is one of the few colleges who worked with the San Diego Food Bank before the convening.

He said the goal of the organization is to have at least a food pantry on every college campus in the county.

“We really believe that education is the vehicle to break the cycle of poverty,” Floros said. “You need to have healthy students and you need to have students that are eating well.”

Miller said A.S. staff from SDSU attended the convening to share highlights and information from last semester’s food pantry kick-off with other colleges in the County.

“Our student volunteers as well as staff are working together to make sure that we are creating a strong resource for our students on this campus through the mobile food pantry.”