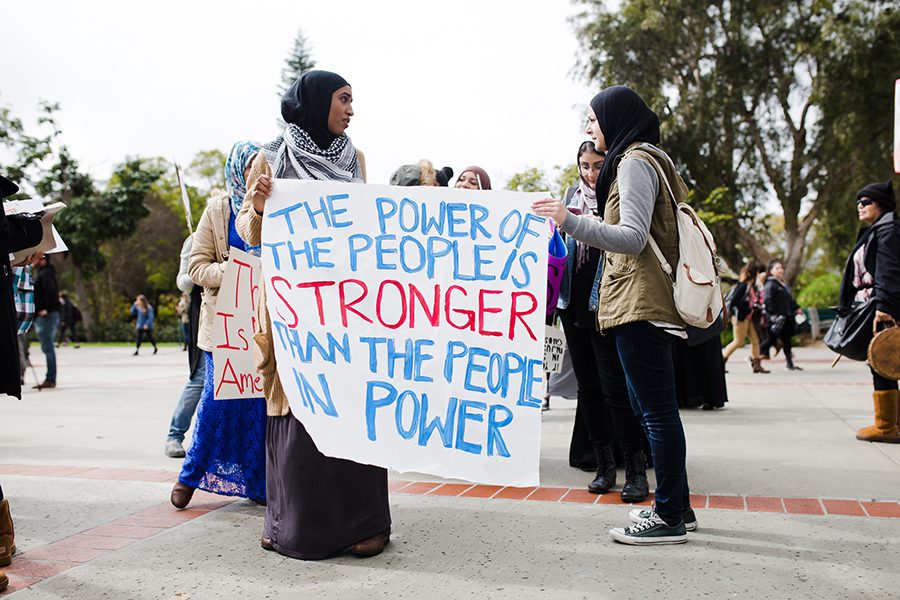 The San Diego State Muslim Student Association organized a #CalStateAgainstHate protest along with other California State Universities on Feb. 7 to speak out against President Trump’s immigration ban.

The executive order banned citizens of Muslim-majority countries including Syria, Libya, Iran, Sudan, Iraq, Yemen and Somalia from entering the U.S. for 90 days and suspended the U.S. refugee program for 120 days.

Students participated in a prayer in front of Hepner Hall around noon as other students and faculty gathered to watch.

MSA President Ahmed Buzeriba spoke to the crowd and said it broke his heart to know Trump does not care about the wellbeing of all people.

“I guess the beautiful thing about hate is that love and unity is always there to destroy it when it surfaces,” Buzeriba said. “Love conquers hate, always.”

Buzeriba said he decided to step up, and collaborate with different student organizations to plan the demonstration given the current political climate.

Dean of Students Randy Timm spoke to the crowd and said international students, faculty and staff are a valuable part of the SDSU community and recent executive orders

“It is critical that people of all backgrounds and nationalities have the opportunity to pursue their education and personal goals at SDSU, so that we work together in a safe and respectful community,” Timm said. “I want you to know as administration, faculty and staff, we stand with you.”

“I am a daughter of immigrants, and I grew up in a border city,” Parra said. “We can not let Trump create a culture that is formed based on hate and fear. We are much more than that.”

Psychology senior Nicole Little addressed the crowd and said people can not silently accept oppression and bigotry just because Trump has agreed to it.

“If societies in the past had accepted unjust laws of segregation and discrimination, I would not be on this stage today. I am a Black American Muslim woman living in Trump’s America,” Little said.

She said she constantly has worry in the back of her mind because of Trump’s words.

“No one deserves to live in fear due to their beliefs, culture, color or any other aspect,” she said.

“Education, not deportation,” “Say it loud, say it clear, refugees are welcome here” and “Hands too small, can’t build a wall” were shouted as the SDSU community marched.

MSA member and sociology senior  Aisha Sharril said she felt a lot of people supported her and were in solidarity with her specifically as a Somali-Muslim refugee.

Under Trump’s immigration ban, Syrian refugees were banned from entering the U.S., before a federal judge in Seattle temporarily blocked enforcement of the ban on Feb. 3.

“We are all aware of the Syrian refugees unforeseen circumstances currently,” Little said to the crowd. “How can we turn a blind eye to their suffering?

“My own family and a lot of my close friends have been affected by this ban, and I thought it would be important to come out here and practice my first amendment right,” Ballat said.“I stand up against all forms of bigotry, hate, xenophobia, racism and stand in solidarity as well as stand up for my family.”

Buzeriba said it is an amazing feeling seeing people come out and support the community.

On Feb. 2 the International Youth and Students for Social Equality also held rally at SDSU for immigrant rights.

“When I do see the Muslim sisters, it kind of makes me sad because yeah, all these people are there for them now, but when they’re going to class tomorrow, where are all of these people going to be?” Buzeriba said.

Buzeriba said MSA will hold a forum in Montezuma Hall on March 5 to discuss Islam, debunk stereotypes and have a progressive dialogue toward change.