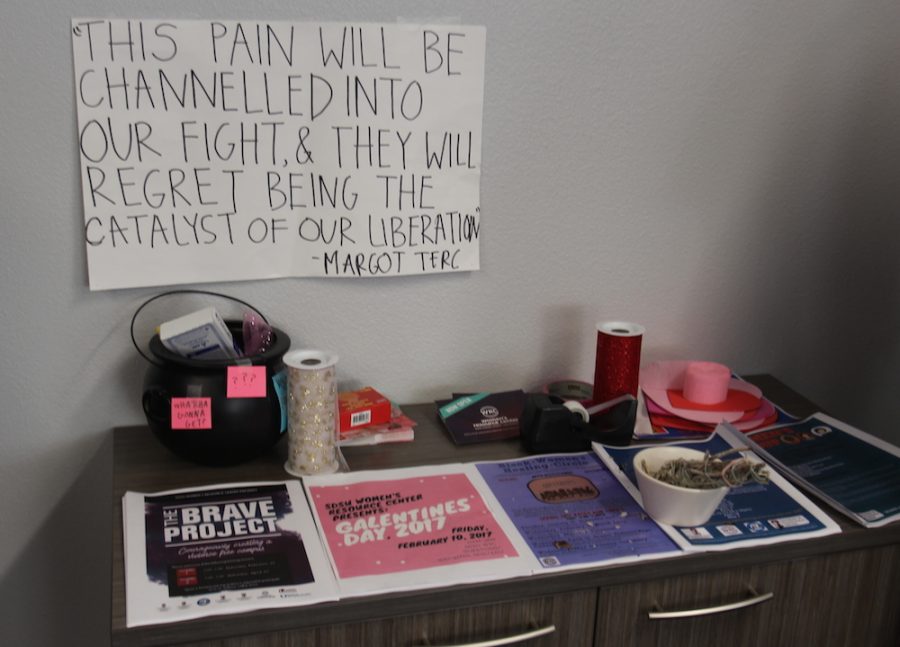 Rhetoric and writing studies senior Sarah Tanori has been involved in organizing the event for the past two years and said she sees it as an opportunity to open dialogue on a polarized issue.

“I just wanted to put this (event) on because I love love,” she said. “I love relationships, I love friendships and I love expressing that and talking about that. I think it’s either very overrated for people or they don’t talk about it at all. I think there are some important layers to love that we should be discussing. I guess the work that we put into this (event) was really thinking of the different facets of what we can discuss in terms of feminism and applying that lens.”

CSU Long Beach student Amanda Tisdale heard about the Galentine’s Day event through a friend and traveled from Long Beach to be a part of the empowering discussion.

“You never know if we’re all feeling the same things and we all can get together and share our emotions,” she said. “We can find out what we all have in common and address issues.”

Tisdale said Galentine’s Day is relevant in terms of its relationship with Valentine’s Day and offers solace to those who may feel insecure about the holiday.

“Some people are probably lonely and question themselves like, ‘Is something wrong with me?’” she said. “Everybody’s normal and going through this.”

Tanori said she believes love is often an overlooked aspect of feminism and sees Galentine’s Day as a chance to discuss the topic in a feminist atmosphere.

“I think love is not a conversation that’s included in feminism,” she said. “People will come to our very educational events about classism, or about racism or about appropriation and I don’t think it would occur to them this could be a feminist issue too. I think it’s important for them to see that so they can get that lens and see love can be a very liberating force for them.”

The event included a screening of the Parks and Recreation episode that coined the term “Galentine’s Day,” but the bulk of the event was consumed by a workshop on radical intimacy led by India Pierce.

Pierce is the founder of the Radical Intimacy Project and the workshop detailed what radical intimacy is, her definition being “a revolutionary ideology that encompasses principles of liberation, community building and healing through closeness, the intentional practice of creating space for care, vulnerability and energy sharing.”

Tanori booked Pierce for the event because she was drawn to the idea of radical intimacy and felt the workshop would be impactful across boundaries.

“I had looked up the radical intimacy workshops, I thought it was just different,” she said. “I felt like I had been thinking about the topic so I just wanted to see how someone could navigate that conversation and how it would manifest with different communities.”

The workshop led participants to understand their own personal definition of intimacy, unlearn the problematic “truths” of intimacy they have learned throughout their lives and think about what their experiences with intimacy have been and what they went them to be.

Pierce stressed that intimacy is not only applicable to romantic relationships, but to friendships, familial relationships and self-love as well.

Tanori said she hoped those who attended Galentine’s Day saw intimacy in a different way and are now aware of what the Women’s Resource Center is.

“Having a different perspective on intimacy and getting the chance to unlearn and unpack in a space is what I hope people get to do because I definitely think talking about these things and learning about these things allows us to heal,” Tanori said. “That’s the biggest thing that I was hoping people would get out of (Galentine’s Day), but also a sense of community and getting people to come to this space and know that we exist and know that they have a space where they can come have these dialogues with us, not just today but every day.”

Because of the generous turnout and empowering message, Tanori said she believes those involved in the Women’s Resource Center will continue to put on Galentine’s Day in the years to come.