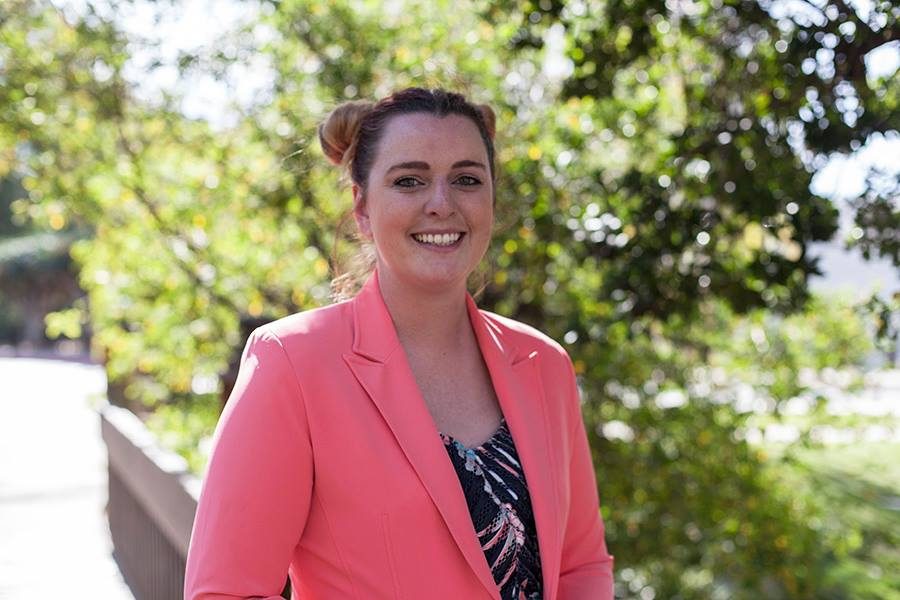 1. Why did you decide to run for Associated Students President?

I was highly, over-involved in high school. I did leadership, yearbook and volleyball. I didn’t find that at community college, so I was really excited for the opportunity to be involved again, especially at San Diego State because it’s so massive. That’s something I’m not used to because I went to a small high school and small community college. Coming here, I said ‘This is going to be an awesome opportunity.’ Student leadership is already something I am familiar with.

2. What are the first three things you would do on the job if elected for this position?

I think one of the things I would focus on a lot is definitely clarification. At least from my perspective, there’s not a whole lot of avert communication. I really want to be over communicative with our student population about any resolutions that are going on, any kind of debates they’re having in A.S., so that would be my number one priority.

I (also) definitely want to see more activities happening, culturally wise. I know a lot of the times when you get exposed to culture, it makes you a little bit more of an in-depth thinker, and allows you to see different perspectives. And for the kids who can’t afford to study abroad or travel, I really want to open that opportunity here on campus. That way everybody gets the opportunity to become a little bit more culturally aware. Back in high school, I catered to a population of Iraqi-Syrian refugees. It really allowed us a really cool insight into that culture, and we instituted days where they could teach dance lessons and days where they could cook food, and we would have a potluck. They were able to bring in everything that they were used to having at home. And I think that those would be kind of cool, having cultural days here. So, planning days where students, whether they’re immigrants or citizens that come from a specific cultural background, can express that and to have that more open. My number one idea with that is Dia de los Muertos.

3. What areas does SDSU need to improve most on?

I would like to see more conversation about sexual assault on campus, and what resources are available. I interned for the District Attorney’s office in victims advocacy. I don’t think we talk enough about (what happens) after you’re a victim of a crime, what is available to you and how that works in the state of California through Marsy’s Law and everything that comes with that. I would really love to see more open dialogue about that. Like I said, just really over communicating with students through Associated Students.

4. Why do you think you can understand SDSU students more than other candidates?

I think I have a really unique perspective because I am a transfer student. I kind of have fresh eyes for everything that is happening, and that’s one of my biggest selling points. I’m not as established as the other candidates, and I don’t really have a lot of roots here yet so I’m looking to build those roots through A.S. and start with a clear set of a eyes and a clear slate.

I think the biggest thing I’ve learned is to really just adjust and go with the flow because coming from a small school life and adjusting to being in a big school was really, really hard. If we can learn to respond quickly to situations in a manner that is “go with the flow,” being calm and under control when a stressful situation arises or when there’s a law passed that’s potentially gonna be affecting our students, we need to learn to adjust and figure out ways that are going to help our students more.

6. If we were sitting here a year from now celebrating what a great year it’s been for you in this role, what did we achieve together?