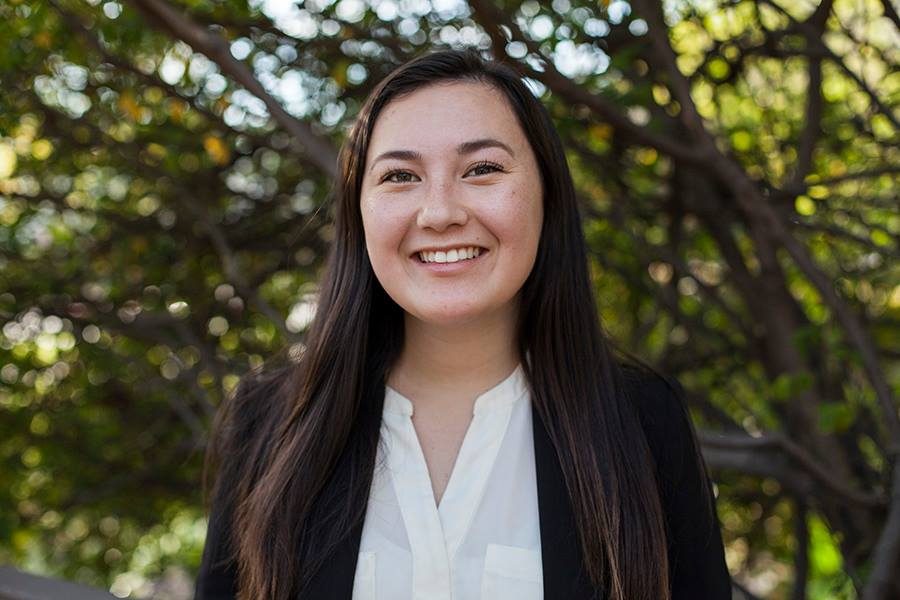 1. Why did you decide to run for Vice President of University Affairs?

I decided to run for this position mainly because I want to make sure that students from all different background and experiences can get involved within Associated Students. I think A.S. really has the potential and is a really great area for students to voice their concerns, but one of the things I really want to concentrate on is making sure that all students can get involved within A.S. I really want to work with students from underrepresented backgrounds to make sure their voices specifically are heard within A.S. I want to work with different student affairs programs at SDSU. I’m coming from the Asian American Student Alliance, which is a cultural student organization.

Every year we have the A.S. executives come in and say a little about themselves and how they’re going to help the community and after they get elected, most of them never come back, and we never hear from them again. The difference for me is I’m actually coming from a different student organization, so I think that makes the difference of me making sure that I’m actually going to do it.

One of the things I definitely want to do is collaborate with the Center for Intercultural Relations, EOP, Guardian Scholars and Student Life and Leadership. There’s so much potential for us to work with different departments and organizations at SDSU.

2. What are the first three things you would do on the job if elected for this position?

Those three things kind of equate to the three goals that I have, and I’m already in the process of making those goals a reality right now.

One of my goals (that) I want to establish an ethnic studies department or major. I think that’s just really important for students to feel empowered and know their history and know the issues going on with different communities. I feel it will enable cross-cultural understanding so that’s one of the things I really want to do. I’m going to meet with different administratives and professors to actually make that happen. Just recently, I met with the College of Arts and Letters assistant dean to actually see what the process would look like for actually establishing an ethnic studies department.

A second goal that I have is increasing the accessibility to academic and non-academic resources to students. Although A.S. has a lot of different resources we offer, I think they can be expanded upon. It can be more clear and transparent about how these resources can help students, or how to get to these resources. We have a food pantry that is open on Thursdays, but I really think the food pantry needs to be in a permanent location, preferably in the Student Union. Instead of opening it one day a week, I think it needs to be open like three days a week. I want there to be different workshops for students who are facing food insecurity and housing insecurity, and then these workshops can be along the lines of: how to buy food in bulk or cheaper, healthier alternatives. I could see myself working with Health and Human Services and possibly ASUB to make a worksheet that talks about how to buy cheap and healthy foods.

I also want to revitalize the A.S. University Council because it is the main area where there’s the A.S. representatives that are the liaisons between students and faculty and I think there’s a lot of different things that can be changed about it. For example, we have a University Senate. The University Senate to me is one of these perfect areas where students can tell administration directly what different problems there are. Within the University Senate, we have different senate committees that equate to different problems we have at SDSU so we have the Diversity Equity and Outreach committee or we have the Recruitment and Retention of Underrepresented faculty task force and I think a lot of students don’t know about these so I want to make sure students know that they can go and actually sit in on these committees and commissions and make sure the A.S. representatives we have on those committees give their reports at the University Council meeting about what they talked about and what they learned.

For the first one, I’ve already met with the college of Arts and Letters assistant dean and I’m already talking with administration about how we would make that happen, and we’re working toward the process of first developing courses that would fall under ethnic studies and possibly having it as a minor and working it up to a major. It’s not something that can be established within one year —it’s definitely going to be a multi-year process, but to me it’s actually starting it and making sure it will continue. To me, ethnic studies is just so important for all students. I feel like there’s a lot of classes we have here that don’t touch on the experiences of different communities or color or underrepresented communities, so I really like it’s really important to have at SDSU.

As for the food pantry, it would be meeting with the people who actually work at the food pantry to see how in our budget we would accommodate for this food pantry, how many years would this process look like, and who we would need to hire.

3. Why do you think you can understand SDSU students more than other candidates?

I think I can understand SDSU students more than the other candidates because of how I’ve gotten involved on campus. I’ve made sure to get involved with multiple different communities on campus and not just one. I’ve been on the executive board for a cultural organization, the Asian Pacific Student Alliance. I’ve gotten involved with Associated Students on top of that and that’s when I worked with the Student Diversity Commission, where there’s representatives from all the different cultures so I was able to really communicate with students from all different organizations.

On top of that, I’m one of the diversity peer educators at the Center for Intercultural Relations and we work directly with different university departments and cultural organizations to implement and create different programs to implement and create different program to help promote cross-cultural understanding. So I think what sets me apart from other candidates and what allows me to relate to more SDSU students is how I’ve gotten involved with many different areas of SDSU, and not just one.

My legacy at SDSU is really advocating for different API or different Asian Pacific Islander issues so right now I am the vice president for internal affairs for APSA. One of the legacies I really want to accomplish is not just working with the API community, but working with different cultural organizations and students from underrepresented communities to make sure the issues that they face are known on campus and can be fixed. So for me, kind of what I talked about with working as a diversity peer educator or coming from a diversity student organization. I think the legacy I’ve left so far is to make sure that the voices from these students are heard on campus.

4. What would you change about Associated Students?

I think one of things I would change about A.S. is really the transparency of it because what I’ve seen is A.S. is a great area and it provides a lot of opportunities for students to voice their concerns, but I think what we need to change and work on is making sure that all students have these same opportunities. For example, in 2014, five percent of the students who held a position within A.S., identified as Asian, Filipino and Pacific Islander, but when you look at the undergraduates the identify the same way, that was 14 percent so it’s kind of one of those things where we talk about how diversity starts here at SDSU and I think that in order for a student government to represent its students it needs to accurately reflect it. I really want to make sure that students from all communities feel like they can get get involved and even hold positions in A.S.

5. If we’re sitting here a year from now celebrating what a great year it’s been for you, what did we achieve together?

One of the things that I see myself achieving kind of goes upon the three main goals that I have. I want to be able to talk about how we’ve started an ethnic studies department or major and how we’ve started the process of establishing it at SDSU. I want to be able to say how we’ve creating different courses for different students that reflect their experiences and their identities, whether that goes from your ethnicity to your race to talking about gender studies. I want all of that to be reflected in an ethnic studies program.