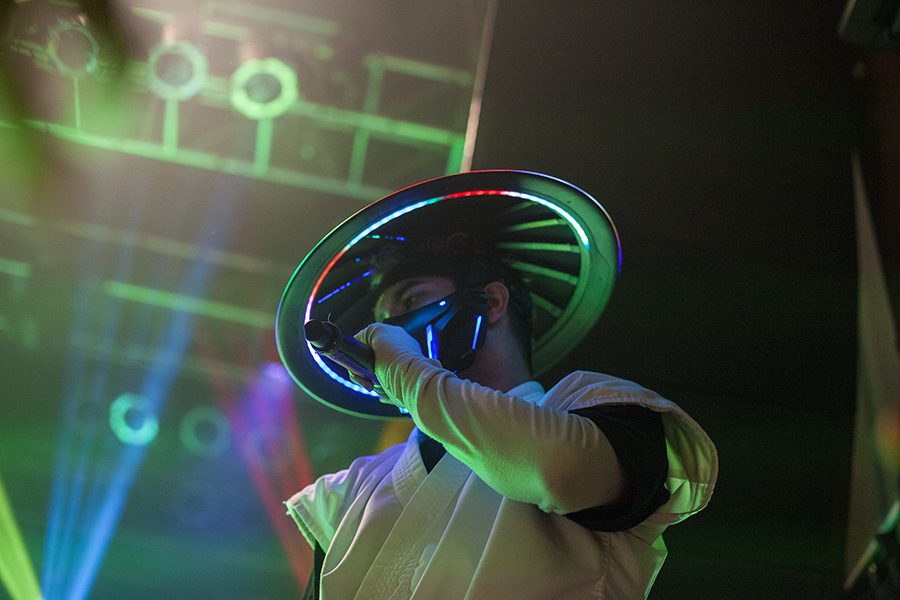 On Friday, March 3, Datsik stopped by the House of Blues San Diego to promote his new live tour, “Ninja Nation.”

Virtual Riot opened at 9 p.m. with Crizzly following at 10 p.m.

The Canadian music producer and DJ, Troy Beetles, better known as Datsik, took the stage at 11 p.m. to show San Diego his new look and stage design, accompanied by his genre of heavy dubstep.

Datsik will be traveling through 47 different venues throughout the country for more than three months, accompanied by Virtual Riot, Crizzly and other surprise openers along the way.

His new EP, “Sensei,” is seven bass-filled tracks with a hint of Asian influence and ninja references that go perfectly with the new set design.

Datsik brought his audience back to the “Samurai Age” with his Asian-influenced stage design, full-on LED ninja outfit, helmet and mask. Picture Shredder from The Ninja Turtles.

Several fans throughout the crowd wore Asian-inspired straw hats and masks to fit the overall theme of his live show. His new and improved stage designs provides the audience with a mind-blowing experience through the combination of spine-tingling visuals and heavy bass.

Datsik was accompanied by a Shinto-inspired stage design complete with LED walls that flashed with every beat. His new PK sound system filled the crowd with excitement and good vibes.

At 11 p.m. Datsik threw-down a variety of grimy old-school tracks as well as the newest music from his EP. The energy from the audience was intense.

Throughout the crowd there was an array of headbangers, people throwing themselves into mosh pits and others just relaxing and enjoying the music.

“I knew it was going to be a great show but the energy from the crowd was exciting and invigorating,” sustainability senior Travis Freeman said. “I got butterflies and chills from the high pitches to the bass drops all night long. Datsik did a good job of getting his audience pumped and involved throughout the show.”

Datsik constantly interacted with the crowd, pointing at different people occasionally, showcasing that he was not just there to DJ, but to show love and support for his fans.

“I come to San Diego often, but this was the biggest turnout in a while,” Datsik said to the crowd in-between sets.

Datsik continued to show his fans love during his remix of “Stand By Me,” by Ben King, as he high-fived people in the crowd closest to the rail.

The audience sang along and cheered during this touching moment.

“Datsik is an amazing DJ,” liberal studies senior Lily Johnson said. “Not only his music production, but his connection with the crowd. He always makes sure to take time out of his set to thank his fans and even play an encore and this time was no exception. It was an all around great experience.”

After Datsik finished his set, the audience chanted, “One more time!” until he came back out and played an encore.
The audience exploded with cheers as he played one final song to end the night on a good note.