Aztec basketball bucked out of the MW tournament by the Rams, 71-63 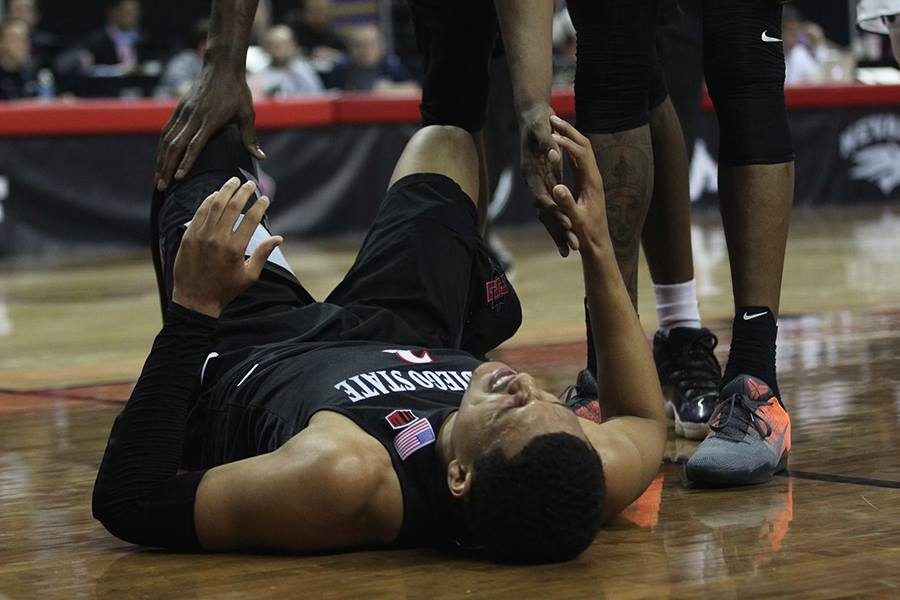 LAS VEGAS-The storyline has haunted them all season.

Even when it appeared they turned the page to a new chapter, it had a way to blow the pages back to that haunting chapter, like most horror movies do just when all seems too well for the protagonist.

Once again, the Aztecs had to confront this nightmarish chapter in the Mountain West tournament semifinals against a team that gave new life to the storyline on both occasions during the regular season: Colorado State.

The nightmare took new form in this iteration, as SDSU saw its third 13-point lead evolve into a potential season ending loss, 71-63.

Now the Aztecs, who once touted a six-consecutive year trip to the NCAA tournament, will have to wait for a selection Sunday for a tournament they had to settle for last year, the National Invitation Tournament.

“We’re not going to play in anything other than the NIT, if we get an opportunity, and it probably won’t happen,” Fisher said. “But if it does, then definitely we will play in that.”

However, without an invitation to the NIT, the Aztecs are in place to snap a 12-year streak of postseason play and at least 20 wins in that same timeframe.

Perhaps the three games in three days, or the late starts, including this game’s 9:52 p.m. tipoff, played a role in the setback, but the narrative didn’t change. The Aztecs blew another lead and had a chance down the stretch to come out with the victory but poor shooting sealed the loss.

“A game like that with what was on the line you don’t really focus on the fatigue,” junior guard Trey Kell said. “Just at the end of the day you’re just trying to make plays and help your team win.”

“Obviously, it doesn’t help playing three games in three days. But that’s not an excuse.”

“We struggled with consistency all season long,” Fisher said. “And we’ve had stretches where we’ve done different things that have been hurtful to us.”

Unlike yesterday’s match against Boise State, SDSU couldn’t rely on the accuracy of sophomore forward Max Hoetzel, who followed up his 12-point second half with zero against CSU. The Aztecs also didn’t get the calls to put the Rams, who were only whistled 13 times, in foul trouble.

Despite the eventual face plant, SDSU jumped out to a 15-2 lead, which was propped on CSU miscues. In roughly the first 12 minutes, the Rams committed eight turnovers that resulted in 15 Aztec points.

Senior guard Dakarai Allen locked down MW Player of the Year Gian Clavell, who was 0 of 4 and had three turnovers, in that same timeframe and SDSU reaped the benefits.

“Darkarai Allen, he’s the best defender I’ve ever played against,” Clavell said. “I told him, when he fouled out. I got so much respect for him.”

While Allen contained Clavell for most of the night, the Rams’ star still managed to drop 21 points, including seven in the final 3:42.

However, CSU cleaned up their act and only coughed up the ball five more times throughout the game, including three in the second half.

The Rams also took away the Aztecs other primary weapon: offensive rebounds. After collecting nine in the first 20 minutes and tallying 13 second chance points, the men from the Mesa were limited to three offensive boards in the second half.

Junior forward Malik Pope, who injured his knee against the Broncos, logged 30 minutes in tonight’s affair and had a team-high 18 points, five rebounds three steals and two assists.