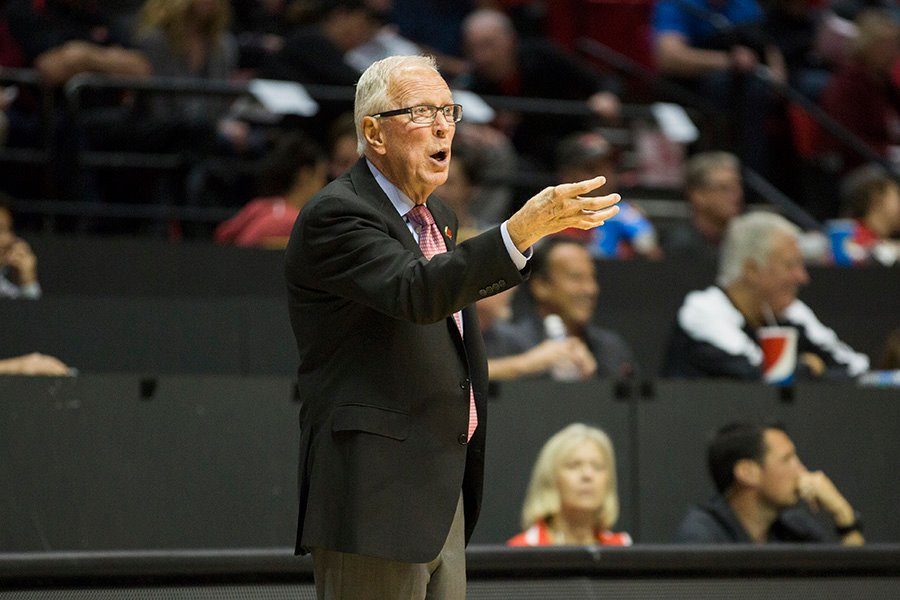 The show has ended for Steve Fisher.

After 18 seasons atop the Mesa, San Diego State men’s basketball’s celebrated head coach has stepped down, according to the San Diego Union-Tribune.

The program is holding a news conference tomorrow to officially announce his retirement and introduce Brian Dutcher as his replacement. Dutcher has been a part of Fisher’s staff since 1989, when he was brought in as an associate head coach at the University of Michigan. He has formally held the title “head coach in waiting” since the 2011 season.

While he still has a season left on his three-year extension he signed in 2014, Fisher wasn’t sure if he would return to the program the following year.

“He’s so competitive … But whatever he does, he’s made his mark,” Colorado State head coach Larry Eustachy said on the possibility of Fisher’s retirement after beating SDSU in the Mountain West tournament semifinals.

That mark is evident in his time at SDSU, the 72-year-old coach took the program to eight NCAA Tournament berths, including six in a row and two Sweet 16 showings.

This decision comes on the heels of a disappointing 19-14 season, which snapped an 11-year postseason tournament streak.

Fisher first arrived on campus for the 1999-00 season and tallied only five wins in his initial campaign. He ends his career with a 386-209 record with the Scarlet and Black.

His success made a clear impact on the attendance within Viejas, as he went from handing out tickets in his first couple years to coaching in front of sellout crowds on a regular basis. This spawned the creation of The Show, which has been ranked one of the country’s top student sections and a love affair between the students and their coach.

Overall, Fisher has coached 26 seasons between the Wolverines and the Aztecs and has counted for 570 wins, 15 NCAA appearances, three Final Fours and the 1989 NCAA title.