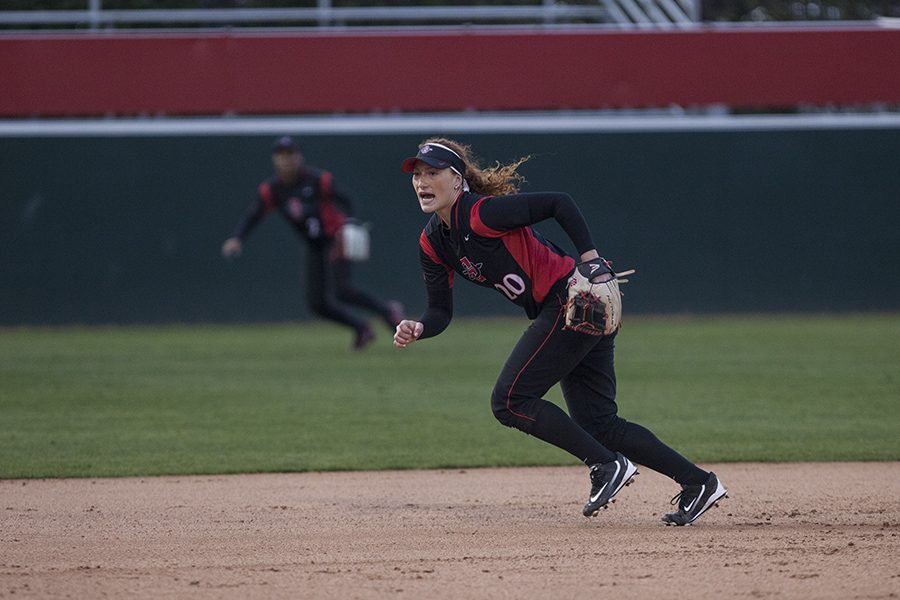 Freshman shortstop Shelby Thrompson reacts to a hit by a UCLA batter on Feb. 10.

The San Diego State softball team went undefeated in its home series against the University of New Mexico from April 13-15, run-ruling the Lobos in two of the three victories.

The Aztecs (23-15, 7-5 Mountain West) are now tied with San Jose State for second place in the conference and two games behind Utah State for the top spot.

Going into the weekend, SDSU was the fourth-ranked offensive team in the nation with every starter in the lineup batting over .300. It’s offensive strength continued to shine against the Lobos (19-18, 5-7 MW), as the Aztecs scored 22 runs in 18 innings.

In her 96th career start, senior pitcher Erica Romero dominated on the mound, allowing only five hits and striking out four over five complete innings.

A steady defense backed Romero up throughout the game, holding the Lobos to only one run, which didn’t come until the top of the sixth when junior catcher Chelsea Johnson hit a sacrifice fly to right field.

The Aztecs struck in the first inning when junior catcher Jenavee Peres drove a two-run homer over the right field wall. In the bottom of the third, Peres hit a sacrifice fly to deep left field to bring in another run for the Scarlet and Black.

SDSU’s fourth and final run came across the plate in the bottom of the fifth with the help of an RBI double from sophomore second baseman Katie Byrd that brought junior left fielder Zaria Meshack in for the score.

UNM scored its run in the top of the sixth but was unable to rally against the Aztecs with two runners on and no outs.

Lobos junior pitcher Alex Formby came in to close the sixth inning and then induced a pair of popouts in the seventh and struck out the final batter of the game to clinch SDSU’s 4-1 victory.

SDSU’s offense got the ball rolling in the first inning with back-to-back RBI singles from Peres and senior first baseman Sydnee Cable.

The team tacked on four more runs to its lead in the second after singles from freshman shortstop Shelby Thompson, freshman center fielder Kiera Wright and Meshack loaded the bases with just one out.

A wild pitch brought one run across the plate, and an RBI single from Byrd brought in another. When sophomore third baseman Molly Sturdivant came up to the plate, she raked an RBI double to left-center field, which brought the score to 6-0, Aztecs.

The threat of a run-rule loomed large in the bottom of the fourth after SDSU put three more runs on the board with the help of RBI doubles from Sturdivant and Cable. But the Lobos were able to bring in two runs in the top of the fifth to extend the game.

However, their two-run effort wasn’t enough to dull the spear of the surging Aztecs.

The game was brought to a swift close in the bottom of the inning when Byrd hit a walkoff RBI double that brought in the 10th run for the Aztecs.

With the end of the season quickly approaching, the energetic lineup will have to remain solid.

“We need to stay focused and have that one goal because in our conference, anything can happen,” Meshack said. “So we need to remind ourselves don’t worry what everyone else is doing, just stay focused for us and I think we’ll be successful.”

Romero allowed just five hits and struck out five over six complete innings on the mound in Saturday afternoon’s shutout.

After three uneventful innings, the Aztecs broke through in the bottom of the fourth and never looked back.

Byrd led things off with a single to right-center field, followed by Peres taking a base on a dead ball and Sturdivant taking a walk. Cable then roped an RBI double up the middle, followed by two more RBIs later in the inning from Thompson and Wright.

In the bottom of the fifth, Peres raked a two-run homer over the center field wall, which pushed SDSU’s lead to 6-0.

Another two-run homer from Peres in the bottom of the sixth secured the team’s run-rule victory.

“Right now, I feel like we’re pretty solid,” Peres said. “The lineup is pretty locked in so far. We all just mesh together very well and if one person doesn’t get it done, then for sure the next person will and so on.”

With just over a month left of conference play, the team has high hopes for reaching the postseason. Its strong offense will be crucial leading up to playoffs.

“We have no options, we have to win games,” Van Wyk said. “The bottom line is we’ve tried to push being super productive at bat, making sure any outs we make are still productive outs.

The Aztecs will hit the road  April 21 to take on Boise State.