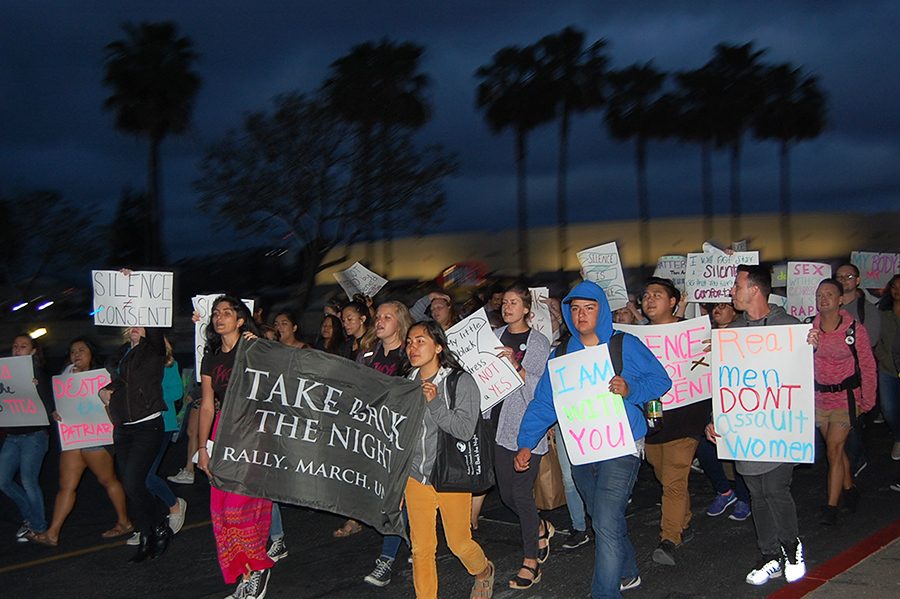 As part of Take Back the Week, organizers created a space for San Diego State students to share their experiences in order to spread sexual assault awareness on campus in the Lee and Frank Goldberg Courtyard on April 13

Take Back the Night is a non-profit that aims to end sexual assault, domestic violence, dating violence, sexual abuse, and all other forms of sexual violence through awareness events and initiatives, according to their website. Since the organization’s inception in the 1960s, over 600 campuses and communities have held Take Back the Night events in over 30 countries.

Womyn’s Outreach Association Executive Board Community Service Coordinator Julia Goldberg said the event’s focus was to create a safe space for survivors, and she thought the night went well.

“It’s really, really cool to hear how people can be vulnerable in the setting we create for them,” Goldberg said. “I think it’s a really nice thing because for survivors. It’s really hard for them to share their stories.”

Other events throughout the week included presentations and panels that focused on supporting survivors and the challenges facing sexual violence prevention.

“Sexual assault happens every single night. It happens pretty much every minute,” Webber said. “It just shows the lack of consciousness, the lack of knowledge and the lack of respect for women.”

Webber said her favorite part of the week is Take Back the Night because of its impact.

“It’s showing you’re going to march, and you’re not going to be quiet about it,” she said.

Co-president of SDSU Womyn’s Outreach Association Charmanay Porter said Take Back the Night was led by the organization.

“This is an issue, not just here, but out in the community and across the nation,” Porter said. “Being able to just open that dialogue with people, that’s why I’m here.”

Biology senior Andrew Suezaki said rape and sexual assault is a huge issue on college campuses, and there needs to be more events like Take Back the Night.

Goldberg said while the group was marching on-campus, people were cheering them on and telling the marchers thank you.

Some onlookers did not see the point in protesting.

“I think that the protesters are not taking the most efficient way to make a change on this campus,” economics freshman Travis Miller said. “I just don’t think a march is the most effective way to go about changing anything on this campus — especially on a Thursday at 7:30 p.m.”

He said if someone really wants to make a change on campus and have an effect, they should go to Associated Students.

“Go to someone who actually has power,” Miller said.

Miller said he doesn’t think A.S. executive officers should participate in marches like Take Back the Night because it demonstrates bias.

“I don’t think it’s politically correct to take a side like that,” he said.

He said he asked one of them what they were protesting about, and a protester told him “sexual violence” and did not care to give any other information about what they were doing.

“I just don’t think protesting is the answer, especially on a college campus,” Shefield said. “I’m not going to say (sexual assault) is not a problem. I think as a whole, our school is doing fine.”