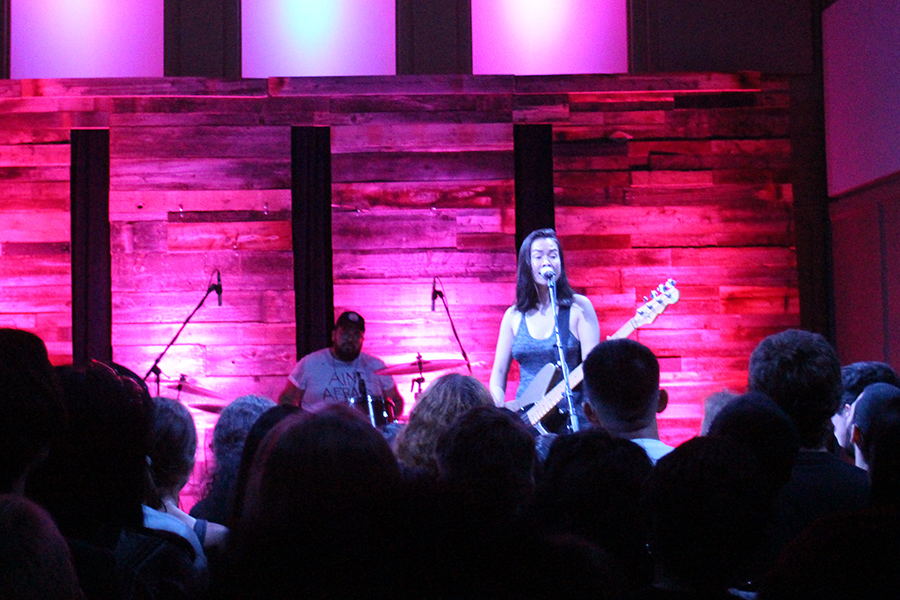 Indie rock artist Mitski graced the stage at The Irenic on Wednesday, April 19 with her emotionally bare music resonating with the crowd of fans who look to her for meaning in the confrontation of complex feelings.

Ten months removed from the release of her critical success “Puberty 2,” Mitski’s hard-hitting lyrical themes, range from love to racial identity to alienation and were often shouted against a backdrop of distorted guitars, still cut just as deep as they did last June.

Mitski opened the set with back- to-back “Puberty 2” tracks “Dan the Dancer” and “Once More to See You,” both songs exploring the pursuit of love against repressive outside forces.

The former got the crowd singing along to the song’s defining moment: “He liked her more than life itself, I’m sure.”

Right off the bat it became clear that Mitski was not necessarily there to banter with the crowd, typical of many artist’s concert rituals.

Instead her goal was to create a space for fans to feel, safely and openly, by connecting with them through the raw vulnerability she expresses through her music.

“I always love artists who don’t try to put on a hype front between their songs,” rhetoric and writing studies senior Jackie Husted said. “(Mitski) was super laid back and her gratefulness for our being there felt very genuine.”

Mitski went back to her 2014 album “Bury Me at Makeout Creek” to perform the heartbreaking fan favorite “Francis Forever.”

This poignant expression of sadness is what hooks many fans into Mitski’s style.

“What draws me to Mitski is the heartbreak of her music,” rhetoric and writing studies senior Sarah Tanori said. “It seems she’s always lamenting a part of her past life and it’s not desperate or anything, just pure.”

She continued with “Bury Me at Makeout Creek” tracks, the dreamy “I Don’t Smoke” and the melodically enveloping “First Love/Late Spring.”

“Wild women don’t get the blues,” Mitski sang on the latter. “But I find that lately I’ve been crying like a tall child.”

She spoke softly into the microphone  between songs, contrasting with the loud candidness of her music, to tell one of the sound technicians that someone in her band had trouble hearing her.

“I am a voice that’s often unheard,” she said in a tongue-in-cheek manner as the problem was being solved.

The crowd got to dance around a bit to the upbeat “Townie,” a song dealing with the self-destructive nature of rebellious youth party-frequenters, and one of the overall best tracks in Mitski’s catalog.

She returned to “Puberty 2” songs for “Thursday Girl” before going into the album’s most iconic track “Your Best American Girl,” which was hailed as one of the best songs of 2016 by many music publications.

The audience joined Mitski in the song’s explosive, triumphant hook, “Your mother wouldn’t approve of how my mother raised me, but I do, I think I do,” addressing identity in the context of a relationship.

After “Bury Me at Makeout Creek” tracks “Drunk Walk Home” and “I Will” and “Puberty 2” track “Happy,” Mitski had the band leave the stage to her and a guitar, somehow making the show more intimate than it already was.

The performance of one of her few acoustic songs “A Burning Hill” saw Mitski at her quietest yet most emotionally exposed, making it the most compelling song of the night as the crowd watched in awe.

“A Burning Hill” displays pinnacle Mitski lyricism, expressing a niche sadness in such a tangible way that it is still incredibly resonant due to its sheer honesty.

The set rounded out with “My Body’s Made of Crushed Little Stars” and “Last Words of a Shooting Star,” leaving Mitski to walk off the stage to roaring applause that led her back for an encore.

During the third verse she held her electric guitar up to her face, and shouted the passionate words into the pickups.

“Mom, will you wash my back this once?” she sang. “Then we can forget and I’ll leave what I’m chasing for the other girls to pursue.”

“I really like (Mitski’s) music because she speaks about things that most people seem to only disclose to close friends or loved ones,” Husted said. “And she doesn’t just speak about them, she kind of screams them, and it’s really powerful.”

These questions are the same kind of feelings of displacement and existentialism Mitski fans come to her shows to ponder and even if they do not leave with clarity, they leave with the articulation of these feelings and the strength to face them.