Students walk out for May Day protest 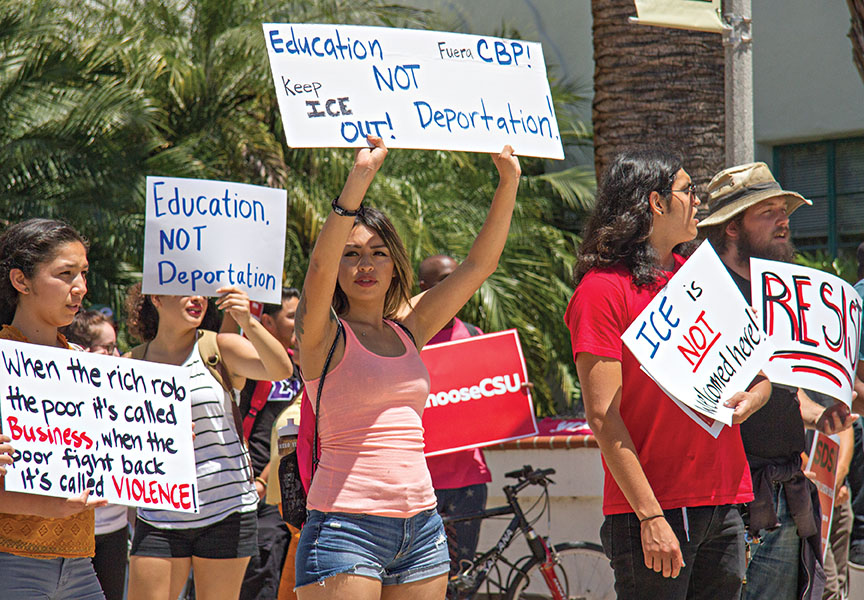 Students also decried the recent decision to increase tuition and advocated in favor of a $15 per hour minimum wage.

In March, the CSU Board of Trustees voted to increase tuition by $270 for in-state undergraduate students, starting in the Fall 2017 semester. Students in graduate and credential programs will face similar increases.

Protesters left their classes and workplaces at about 12 p.m. and marched to Manchester Hall. Many later took a bus to downtown San Diego to participate in a larger May Day rally.

Supporters of Associated Students’ Choose CSU Campaign, which focuses on stopping the tuition increases, were also present. Though they organized separately from the May Day protesters, the two groups banded together to call for change.

College of Arts and Letters President Nick Elliott said the Choose CSU Campaign is a statewide movement by the California State Student Association to combat the coming tuition increases.

“This is for us to get a fully funded CSU so that the tuition increase doesn’t go through,” Elliott said.”

The CSU Board of Trustees’ decision to increase tuition requires the increases be revoked if the CSU’s support budget request to the state government is fully funded.

Elliott said he will be traveling to Sacramento on May 2 to meet with legislators and lobby against the tuition increase.

Students participated for a variety of reasons. For some, the topics at hand were personal.

“My parents were undocumented when they came to study,” marketing freshman Jose Jasso said. “People (who) come here just to study should be able to, whether they’re undocumented or not.”

Other students voiced their concern about the rising tuition.

Management information systems junior Abdurahman Mohamed said this was his main reason for being at the protest.

“If there’s a (tuition) hike it should be reflected in higher quality resources for students and education, and it’s not,” he said.

Some bystanders, though encouraged to show their support and take up signs, were not entirely convinced of the protest’s merit or impact.

“I used to work here, and I don’t think that unskilled laborers need to paid ($15 per hour),” kinesiology sophomore Jeremy Kohlhepp said. “I think talking to actual people, like the president, is more effective than protesting.”

Another bystander, though initially skeptical, was persuaded to join the demonstration.

“Really, I do agree with lowering tuition,” freshman theater major John Michael said. “That is something that I want to march for. I’m not entirely convinced this will make an impact, but it’s a start.”

Between chanting, Professor Isidro Ortiz of the Chicana and Chicano Studies Department spoke to the crowd about the necessity of making SDSU a place safe for everyone.

“If the slogan ‘Aztec Proud’ is going to be anything but a marketing strategy, it’s time to invest in undocumented students,” he said.

“Making SDSU a sanctuary campus would send a clear message to AB 540 students – that it is okay to be who they are, and that they have a place here and have earned a place here.”

Ortiz is referring to California Assembly Bill 540, a 2001 law enabling some undocumented immigrants to pay in-state tuition at public universities in California.

“It would enable them to invest in the activities necessary for success instead of worrying about whether they’ll be deported,” he said. “And it would provide a space where they could become involved in organizations rather than remaining in the shadows.”
He also thanked the protesters for rising to the occasion, and called it inspiring.