College View Estates residents do not like SDSU's plan to build two new dorms next to Chapultepec Residence Hall. 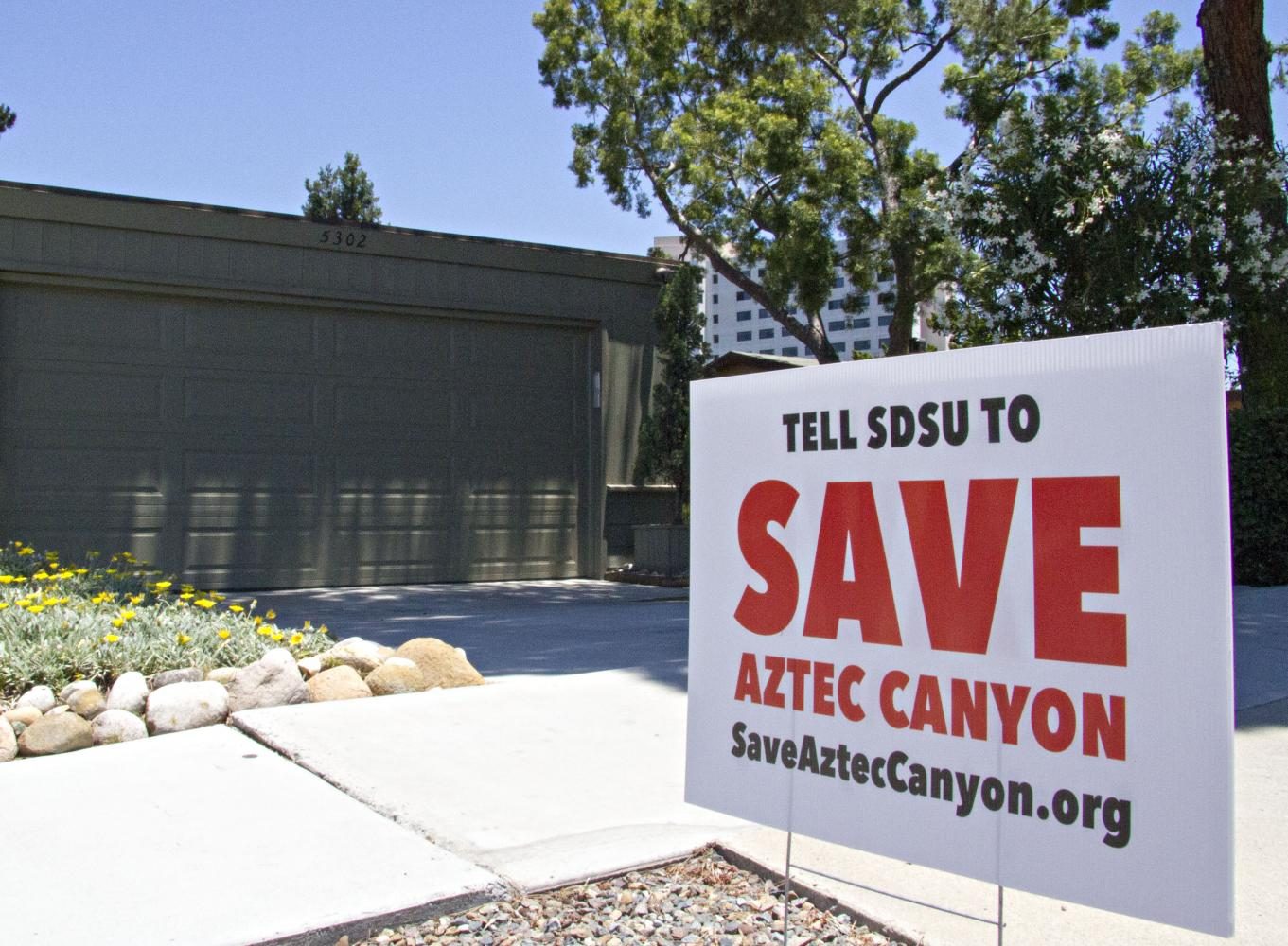 Yard signs pepper the College View Estates community drawing attention to what residents claim is a threat to the canyon.

College Area residents packed into the warm, stuffy sanctuary at Faith Presbyterian Church Wednesday evening for the College Area Community Council and College Area Community Planning Board meeting to hear an update on San Diego State’s plans to build new dorms on the west side of campus. Representatives from SDSU were on hand at the meeting to talk about changes made to the plans and to answer questions from the public.

The dorms are proposed for an area known as Aztec Canyon, adjacent to Chapultepec residence hall.

Residents created a website, “SaveAztecCanyon.org,” and placed signs throughout the campus and neighborhood to rally opposition to the university’s plan. The website claims construction would threaten 85 rare and endangered species of plants and animals who live in the canyon.

Rene Kaprielian lives in College View Estates and is part of the Save Aztec Canyon coallition. He questioned SDSU’s decision to build in university’s westernmost corner.

“It’s a massive project a half mile away from public transit and they said they’re not putting in more parking,” Kaprielian said. “They have alternative sites that wouldn’t require going into the canyon.”

“Chapultepec is sort of out on an island by itself,” she said. “We want to build a community around that and provide some more resources — food services and that sort of thing — so that we have a legitimate community around Chapultepec in the same way that we do on the east side of campus.”

In the original, draft Environmental Impact Report, the SDSU project proposed a build-out in three phases. Phase I consisted of a series of low-rise buildings with 850 beds to the east of Chapultepec. Phase II included a 14-story residence tower of 850 beds immediately to the west. Phase III was the most environmentally impactful, as its 866 beds would have been shared between four 11-story towers built into the canyon itself.

After input from the public, outgoing SDSU president Elliot Hirshman moved to eliminate “significant and avoidable” environmental impacts, and the university removed phase III from its EIR and reduced the tower height of phase II, eliminating a total of 966 beds from the project.

SDSU Director of Planning Laura Shinn and Sarah Lozano, a consultant from environmental firm Dudek, took turns responding to concerns from members of the public, some of whom disputed the need of the university to expand.

“They don’t really care how it impacts our neighborhood at all,” she said. “They’re not required to care and, financially, there’s no motivation for them to care.”

During the meeting residents expressed frustration at the process involved in approving the project and the inability for city leaders to do anything. The canyon is state — not city — property, and final approval rests with the CSU Board of Regents.

The university hopes to break ground by the end of 2017 and for students to move in to phase I of the project by the start of the fall 2018 semester. Phase II does not have a timeline for construction at this time.

Update: SDSU’s draft EIR and more information on the project can be found here.
Read The Daily Aztec’s story on the Sophomore Success Program here.