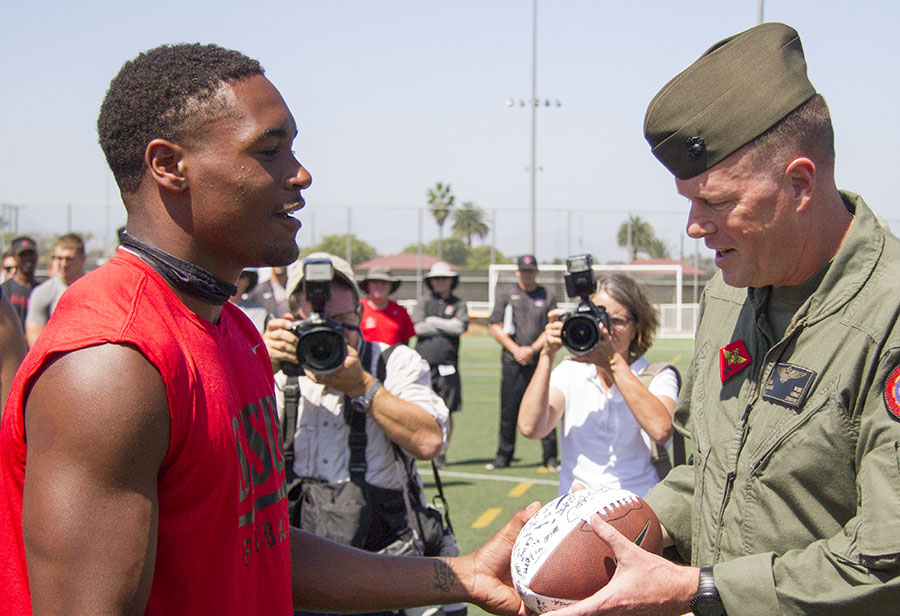 In a tradition long held by the Los Angeles Chargers when they called San Diego home, the Aztecs met with Marines and fans on the base before holding a shortened practice at the base’s sport complex.

This was the first time SDSU has been to the Miramar base as a team.

Senior defensive lineman Dakota Turner, whose father is a retired marine and who spent a lot of time at armed forces bases as a child, said he relishes the chance to give back to a community he was once a part of.

“It’s an awesome opportunity to give back to the community and the military family,” Turner said. “They give so much, so even something small like this is the least we can do.”

“We stand behind each other, we have each others backs, we communicate like a military unit. That’s a big part of how we play,” Dixon said.

“It’s a blessing every day to get to do what we do, and that’s thanks to them.”

The event began with several Aztecs presenting Maj. Gen. Mark Wise and Col. Jason Woodworth with signed footballs. Wise and Woodworth returned the favor with jackets for Director of Athletics John David Wicker and head coach Rocky Long. The team spent some time speaking to fans and signing autographs, bringing back memories for several Aztecs, including Long, whose father was in the army.

Long spoke to what this chance meant for his young team.

“This was an opportunity for our team to do something they have not done before,” Long said. “What you’ll see is a completely different atmosphere because they play for the love of the game … the experience they are having is much more valuable to this age group than any other age group.”

The event reminded Turner of similar events from his childhood on a military base.

“I remember professional teams that would come on the base and trying to get autographs and looking up to those guys,” Turner said. “So it’s great being in there shoes and giving back and being a role model like this.”

Aside from meeting with and giving back to armed service, this event also gave the Aztecs an opportunity to branch out to fans who were abandoned by the Chargers.

SDSU adopted the “one city, one team” tagline this year in an attempt to remind fans that even though the Chargers left, there is still a reason to make a weekend visit to Qualcomm stadium. Long took this opportunity to make his pitch to San Diego football fans.

“Football fans are out there … if you’re a football fan in total, we’ll get some people that just like to watch good, competitive football who don’t to drive 3 hours and pay $150 for a ticket,” Long said. “They’re not as skilled, they’re not as big and they’re not as fast, but they play for the love of the game.”

Lance Corporal Jason Favor, who is a former Rams fan from St. Louis, Miss., knows what it feels like to have a team leave town.

“It seems like LA takes every home city’s team away.”

Favor said he enjoyed the visit, and sees the opportunity that the Aztecs are taking advantage of as the only show in town.

He will get his first chance when SDSU hosts UC Davis on September 2, 2017 when the two-time defending Mountain West Conference champions begin the quest to capture the city of San Diego.