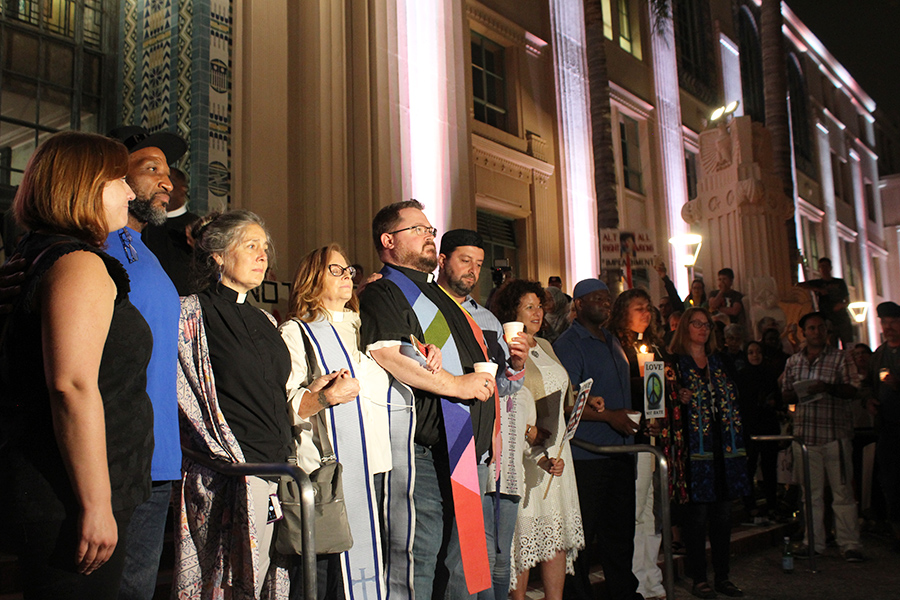 This was the sentiment the night of Sunday, Aug. 13, at Waterfront Park in downtown San Diego, where people from throughout the region descended for a candlelight vigil in honor of the woman killed while protesting against white supremacists at a rally in Charlottesville, Virginia.

Heather Heyer, 32, died and 19 others were injured Saturday after being struck by a Dodge Challenger driven into a crowd of counter-demonstrators at Charlottesville’s Emancipation Park. The vehicle’s driver, identified as 20-year-old James Fields Jr., managed to reverse and escape, but was later arrested and charged with second-degree murder.

Attendees held up candles – both real and artificial – as well as lighters, phones and anything else they could wave back and forth as they chanted and sang “This Little Light of Mine” and “This Land is Your Land.”

Rev. Beth Johnson of the Palomar Unitarian Universalist Fellowship in Vista said the torches of the white nationalists at the Charlottesville rally shone hate and fear on their faces.

“The light showed the horror of what we are finally coming to terms with in this country,” she said. “Tonight, I look at your faces here that are lit with sadness, lit with fear, but lit with hope, with the anticipation that together, can make this world what it was called into being, by love.”

“I know that you know that the moral arc of the universe is long,” Johnson said, referencing Martin Luther King Jr. “And we are bending it towards justice.”

Many of those present at the vigil said they were there out of a sense of duty to hold their ground against the neo-Nazi movement that Heyer died standing up to.

“We came here to reaffirm our determination as people of faith and people of conscience here in San Diego that we should never allow our nation to dive into this cycle of hatred and racism again,” Hassane said after the event. “And we all have to work together to stop it right here.”

Escondido resident Yusef Miller said he was at the vigil to “speak up for equality and justice.”

“We want to draw people’s attention, of course, to the senseless loss of life yesterday, and also to let people know that this is an issue that goes on throughout the country,” Miller said, “and we all need to stay resilient against this type of white supremacy, injustice and bigotry that happens throughout our country.

SDSU graduate student Bo Elder said it’s important for people to show their opposition to the white nationalist violence that he sees as more and more of a problem in this country.

“It’s being emboldened by a president who just winks and nods and says the bare minimum,” Elder said. “People need to stand up and show that they won’t (tolerate) it and get organized to act against it.”

President Donald Trump was criticized for responding to the Charlottesville incident by blaming “hatred, bigotry and violence on many sides.” Many, including Virginia Gov. Terry McAuliffe, questioned why the 45th president did not specifically address the white nationalists and neo-Nazis who organized the rally Heyer was killed protesting against.

Kathy Stadler of San Diego Indivisible said the vigil was put together on short notice by her organization in partnership with Women’s March San Diego and Together We Will.

Stadler said she was in Atlanta when she heard the news from Charlottesville, and was “stunned.”

“I think, sadly, this isn’t the last event like this that we’ll have,” she said. “This is a really long war we’ve gotten into. And a lot of the things that our country has needed to reconcile for a long time are really coming out to the forefront.”

Stadler said the woman who posted the event to Facebook, Chris Wodjak, had never planned anything of this size before.

“She said she had faith that the community would come and that people would step up to help make it go,” Stadler said. “And they did.”

Leaders of SDSU’s College Democrats and College Republicans both later condemned the violence in Charlottesville.

College Democrats President Michael Cline said the thought that peaceful demonstrators were run down for their political viewpoints is “terrifying” and a reminder of “how toxic our political environment is.”

“Having a vigil is, hopefully, a return to some sort of civility in the conversation and maybe we can learn from this tragic and unfortunate circumstance,” Cline said.