The future may be now for SDSU football 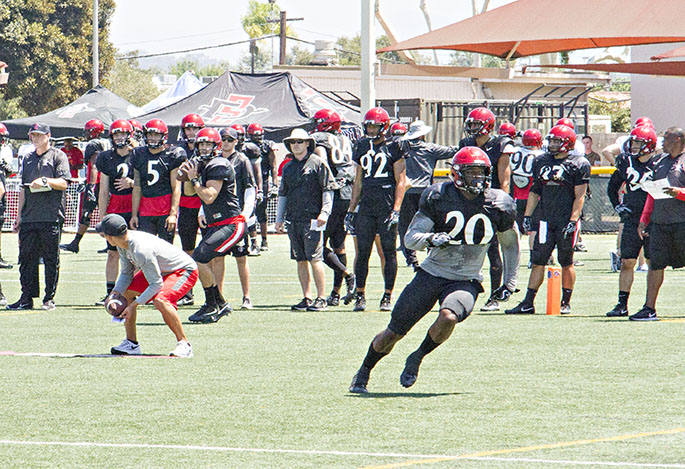 SDSU senior running back Rashaad Penny runs a route during the team's practice at Miramar MCAS.

The constant turnaround is what makes college sports exciting. Aside from the rare outlier, maybe players compete at this level for a maximum of four years before having to say goodbye and rebuild. Each year talent and leadership is lost.

But for San Diego State football, this last year’s collection of lost talent will be a challenge to overcome.

The head of that class was Donnel Pumphrey, a four-year starter and the all-time rushing leader in the history of college football.

The Philadelphia Eagles drafted Pumphrey with the 132nd overall pick in the fourth round.

Pumphrey ran behind four senior offensive linemen, including Nico Siragusa, a fourth-round pick of the Baltimore Ravens who started 41 consecutive games for the Aztecs.

On defense, SDSU lost two-time MW Defensive Player of the Year Damontae Kazee, who is making his name known with the Atlanta Falcons, as well as three-year starters Malik Smith, Calvin Munson and Alex Barrett, who are all attempting to secure NFL roster spots.

Despite the copious losses, Long said he is optimistic about the future of his team, which will need to begin now.

“We have seven guys in NFL camps right now, so you obviously miss their talent and their experience,” Long said. “But i think we have a talented team right now, and some of them are gonna be in NFL camps next year or in the years after.”

The talent will take time to come together, however, especially with four new starters on the offensive line and only one returning starter on the defensive line.

“This team is starting a lot younger, so they’re starting a lot lower at this point… we will be a good team by the fifth game, but right now we are really young,” Long said.

Long said there will most likely be a freshman getting major playing time at several key positions, including safety, running back and offensive line (where up to four may be seeing starting time).

Long refers to this explosion of young talent as “inexperienced depth” – a feature of the team that may come into the forefront earlier than expected, as several Aztecs are facing bouts of chickenpox, hamstring issues and other injuries.

Senior linebacker Randy Ricks said the veterans are putting their faith in the young Aztecs.

Redshirt junior quarterback Christian Chapman said he believes in his team, and despite its youth, it has the potential to build on last year’s success.

“We have athletes this year to step up into those roles that guys left behind… we have the opportunity to be better than the team was last year, a little more explosive this year.”