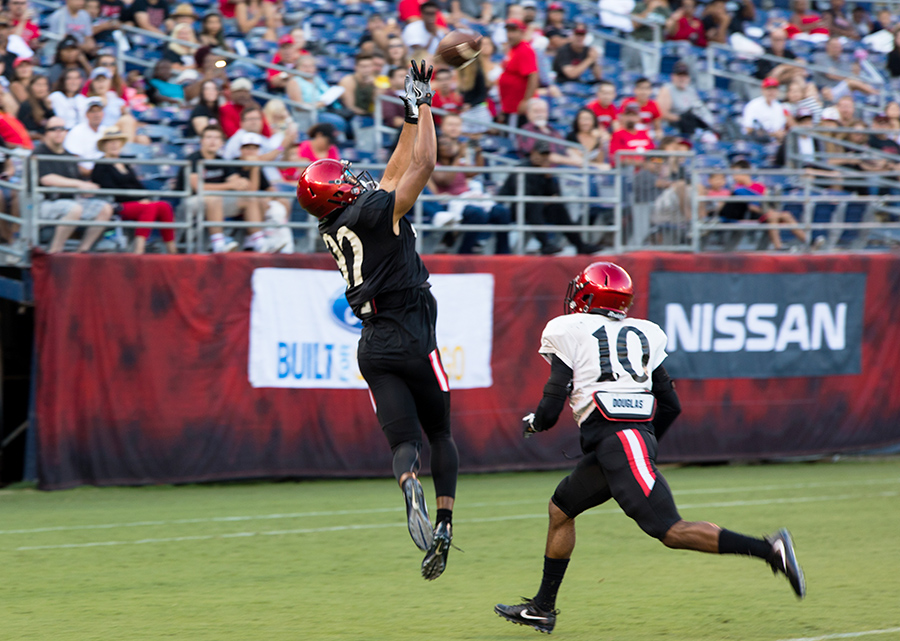 It was a beautiful day for preseason football at Qualcomm Stadium as the San Diego State football team held its annual Fan Fest, where fans came out to watch a scrimmage between the offense and defense as well as join them on the field for autographs.

Due to the fact that it was mainly a practice scrimmage, the starters didn’t get too much action. Redshirt junior quarterback Christian Chapman was under center for minimal snaps, which consisted mostly of hand offs and safe passes for short gains.

Senior running back Rashaad Penny, the Aztecs best offensive weapon, didn’t see a single snap and his only action of the day was signing autographs at the end of the event.

Head coach Rocky Long gave his rookies and backups a major opportunity to show what they can do, and a few rookies stepped up to the challenge.

Redshirt freshman receiver Isiah Macklin and redshirt freshman running back Chase Jasmin each found the endzone for a combined three total touchdowns. Macklin looked ready to play from the first snap, and took advantage of the opportunities to prove that the Aztecs can maybe steer away from such a run heavy offense.

“San Diego State is known for its running backs and we’re trying to create more opportunities for our receivers with throwing the ball more,” Macklin said. “I feel honored that the coaching staff chose me to be here.”

The major criticism of the SDSU offense is that they haven’t had the talent on the outside in recent years to throw the ball with consistency. The Aztecs only averaged 144.5 passing yards per game in 2016, compared to the 263 rushing yards per game, good for 7th in the FBS.

With Donnel Pumphrey — the all-time rushing leader in FBS history — and standout Rashaad Penny in the backfield last season, Long didn’t have a problem just relying on the run game. Now that Pumphrey has been drafted by the Philadelphia Eagles, that dual threat is gone, and we will see if Chapman can step up to the plate and successfully throw the ball in crucial moments of the game.

Bringing in 6-foot-5 freshman receivers like Macklin and redshirt freshman Tim Wilson Jr. is a step in the right direction to expand SDSU’s offensive capabilities.

The other freshman who turned heads was Jasmin, who scored once by stretching the ball just over a pile of defenders to break the goal line. Jasmin finished the scrimmage with 60 yards on 16 carries, splitting carries with fellow freshman running backs Kaegan Williams and Chance Bell.

Jasmin sits fifth on the depth chart as of now, but it wouldn’t be a surprise to see him get some action during the regular season after a solid outing against several defensive schemes.

Going into the opening game of the season against UC Davis on Saturday, Sept. 2,  Long emphasized after the scrimmage that the team still has a lot of work to do.

“Obviously, we’re not in midseason form by any means,” Long said. “Early in the scrimmage we dropped four or five passes that should have been caught. Late in the scrimmage I don’t think we tackled very well.”

The comments by Long should light a fire under the team, and hopefully sharpen the fundamentals of their game so they are ready to go out and defend their 2016 Mountain West Conference championship.