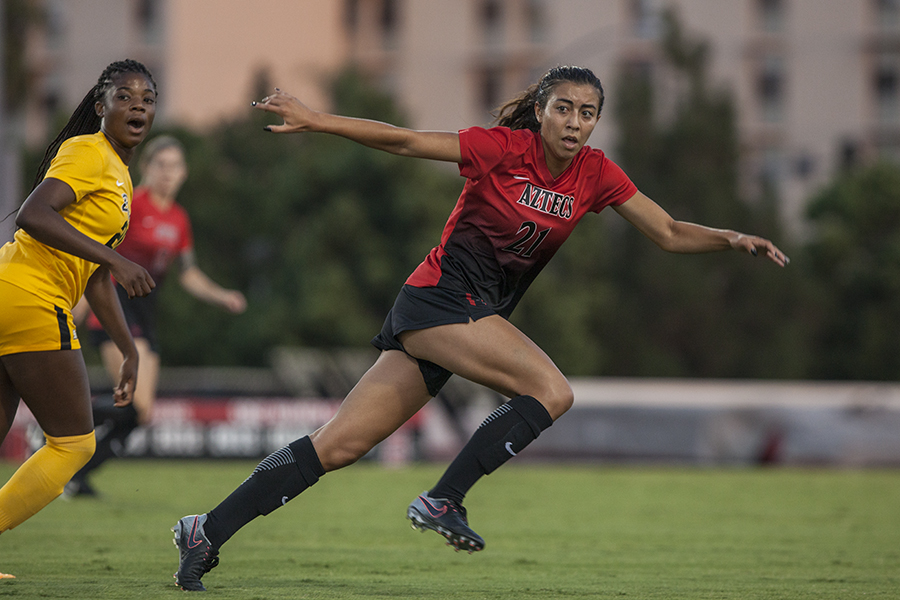 A beautiful San Diego night was spoiled for the San Diego State women’s soccer team on Sunday night, as it fell to Long Beach State 2-0 for its second consecutive defeat. The loss dropped SDSU to 1-3 on the season.

The first goal the night came when Long Beach State senior forward Tori Bolden beat the Aztecs in a race down the field and pressed her shot into the net in the 34th minute.

The goal served as a testament of the 49ers’ aggressive style of play in the first half that opened the door for many opportunities.

A mere seven minutes later, LBSU’s freshman forward Kayla Cannon sent a pass to fellow freshman forward Nadiyah Siqueiros, who positioned herself effectively to score from about four yards out. At halftime, the 49ers held a 2-0 lead and the momentum.

SDSU head coach Mike Friesen said that the Aztecs’ poor execution and inexperience cost them in the first half.

“I thought we played poorly in the first half and Long Beach State played well,” Friesen told GoAztecs.com. “I felt like our youth and inexperience put us in a hole and a deficit where we showed up thinking the other team wasn’t going to come out and play that hard.”

Similar to Friday night’s match against Arizona State, the Aztecs were forced to make adjustments at halftime.

The aggressive style of play that proved beneficial for LBSU in the first half also proved useful for SDSU, including when Utush found herself one-on-one with LBSU goalkeeper Imani McDonald. Utush put up a shot, but McDonald stopped it short of the goal.

The Aztecs’ fate was sealed when a Frisch shot in the 82nd minute was blocked after another aggressive sequence of play.

Looking ahead to Friday’s matchup against cross-town rival University of San Diego, Friesen said the team needs to focus every moment of the game.

“We have to turn around and get prepared for next week,” Friesen said. “We want to make sure this team can reach its full potential. We are a very good team that needs to understand that every minute of every game is important. Once we do that, I think we’ll be just fine.”