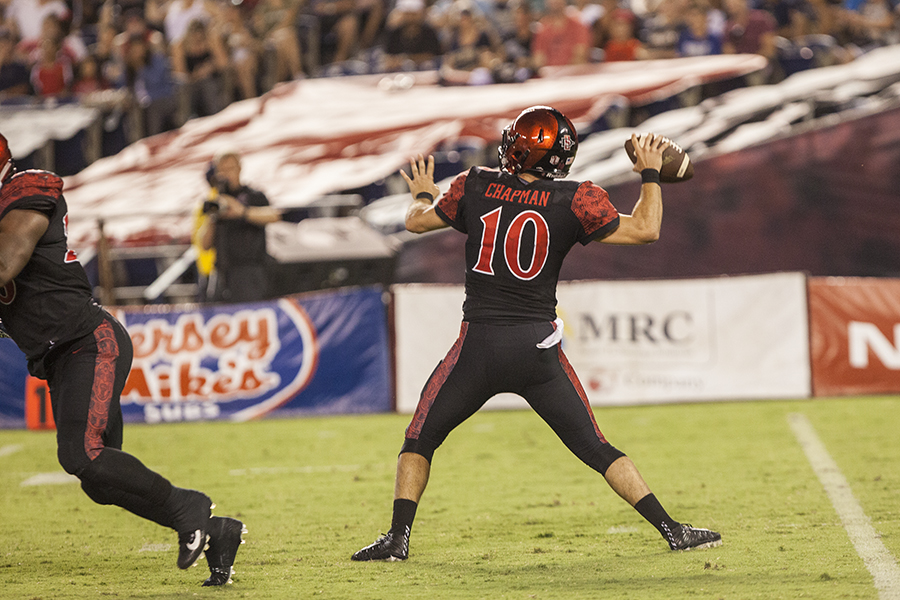 It’s been a stressful, question-filled offseason for head coach Rocky Long and the San Diego State football team. The success of this season is square upon the shoulders of a team of fresh faces.

Not to mention one of the 12 includes the former centerpiece of the Aztecs’ offense, now Philadelphia Eagles running back Donnel Pumphrey. That isn’t an ideal situation for a coach to embrace, but change doesn’t scare Long, and the openings give opportunities for several freshmen and young players to shine and help the Aztecs succeed just as much if not more than their predecessors.

“The best thing about being young is that you do not know all the pitfalls that an old guy like me knows. They all think they are going to be as good as they were as seniors in high school. They know they are going to be good,” Long said. “Well, guess what? They are not, but I like their attitude. I like that they think they are. It’s good to be young. You don’t know what’s going to happen to you out there.”

Let’s begin with the offense. The successful strategy of ground-and-pound running that proved to be so successful for the Aztecs while Pumphrey was in the backfield is now up for questioning, as the task has been passed onto senior running back Rashaad Penny.

Penny is an explosive back who can break through tackles and run over defenders with little to no effort. His explosiveness is undeniable and it shows in every aspect of his game. He is game proven, and the only thing that he could improve on is his leadership and embrace his position as the feature back of the team. That, however, isn’t the big question for the Aztecs. What worries coaches and fans is the fresh faces on the offensive line.

Every football coach and player knows that the success of an offense begins and ends with the men up front, and even with the best skill players in the back field they would be nothing without a solid offensive line. And for the past couple seasons, the Aztecs have played with the best line in the Mountain West Conference.

Coach Long and  Offensive coordinator Jeff Horton have decided that their best option moving forward is to put their faith in the youth. Junior starting quarterback Christian Chapman understands that there is a lot of risk with rookies starting, but has faith in his on field body guards.

Working with them throughout the spring has given him the opportunity to gel together as an offensive unit and see the rookies improve as football players and as teammates.

“I think midway through camp after we got a few scrimmages underneath our belts, you started to see the guys growing and getting used to the kind of group that was in,” Chapman said. “We did rotations with certain ones and twos. Once they got a concrete group in there with the right guys and they got a fill for each other, they slowly started to get better. I want to see them in live action and see how they do.”

It is crucial to have the team trust and believe in each other and the way that these guys talk about each other and how they carry themselves all point to success this season.

The faith and optimism in the young guys doesn’t end with the offense. The defensive side of the ball for the Aztecs will also see some freshman getting immediate action in their young collegiate careers, as the Aztecs plan to play freshman safety Tariq Thompson and sophomore safety Trenton Thompson — no relation — in the secondary. Tar. Thompson recorded an interception in his first collegiate series against UC Davis. They have some great veterans to follow, as senior safety Trey Lomax will lead the Aztecs and try to steer his younger teammates in the right direction. Lomax knows all about the talent his teammates have, even if they haven’t been able to prove it yet.

“I am not really nervous,” Lomax said. “But it is definitely a challenge how young we are, especially in the DB group with Tariq Thompson and Trenton Thompson not being experienced, but they are talented so I have confidence in them.”

Sure, it isn’t ideal to put this much inexperience in a starting line up, but fate has forced SDSU’s hand. The problem with having so many young players in starting positions is that there may be a lack of leadership and experience that can possibly cripple a team. Veterans like Chapman and Penny should be able to command the locker room and the offense, while we may see Ron Smith and Trey Lomax  have to step up and lead the defense to success and help develop the rookies.

Although they are young, this Aztec team is still fully able to defend their MWC championship and look to make their way into the Top 25 if they can continue their tradition of winning.