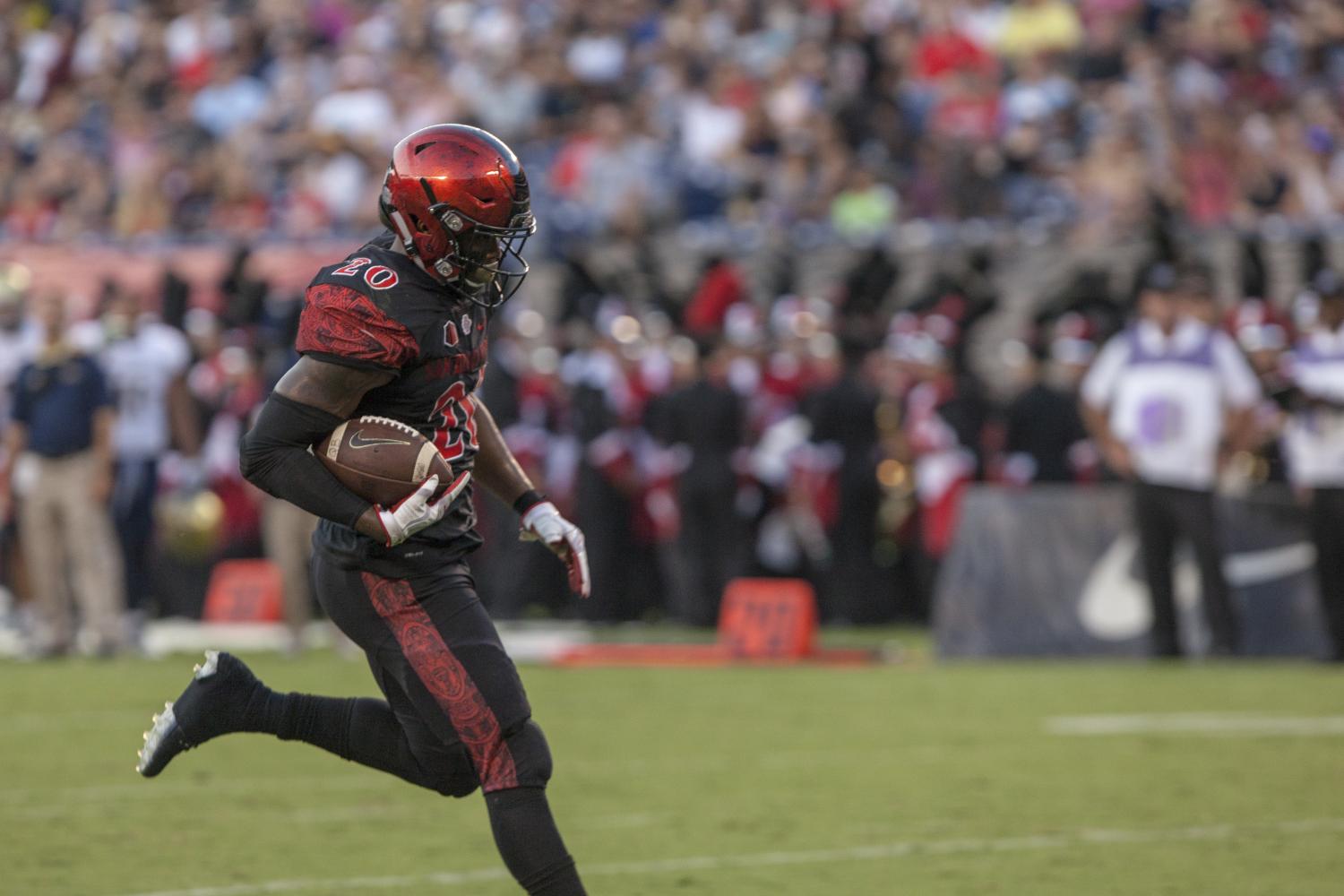 Senior running back Rashaad Penny breaks across the goal line in SDSU's win over UC Davis.

Rashaad Penny stole the show in the desert on Saturday night, as San Diego State’s senior running back logged a career-high 353 all-purpose yards and three total touchdowns in a 30-20 victory over Arizona State University.

This was the 12th matchup all time between the two schools, and the Aztecs’ first win over the Sun Devils in the series.

The Aztecs (2-0) rode Penny to start the game, getting him the ball on each of the team’s first four plays. SDSU’s first drive came to an abrupt end after redshirt junior quarterback Christian Chapman was twice taken to the ground, but it wouldn’t be long before Penny took over.

After ASU junior punter Michael Sleep-Dalton pinned SDSU on their own one yard line with 9:44 to go in the first quarter, Penny broke through on a 3rd-and-6 for a 95-yard touchdown run to give the Aztecs an early 7-0 lead.

The Sun Devils equalized on the last play of the first quarter with a 6-yard touchdown run from senior running back Kalen Ballage, but Penny returned the ensuing second quarter kickoff 99 yards to put the Aztecs back on top 14-7.

SDSU head coach Rocky Long said he was not surprised by Penny’s showcase.

“Just seeing what we knew all along,” Long said. “We think (Penny) is one of the best running backs in the country.”

For as much success as Penny had on the ground, Chapman had as much trouble getting anything started through the air. Bullied early by Sun Devils senior linebacker Koron Crump, who recorded two sacks, Chapman was only able to complete nine of 18 passes for a total of 73 yards to go along with one touchdown, a 33-yard toss to Penny.

A 30-yard field goal by junior kicker John Baron II extended the Aztecs lead to 17-7 with 7:39 to go in the half, but ASU senior quarterback Manny Wilkins responded by orchestrating a 76-yard drive that ended with a five yard touchdown pass to sophomore wide receiver K’Neal Harry.

Wilkins would go on to have a solid game despite the losing effort, finishing with 298 yards passing on 22 completions to go along with two touchdowns.

The Aztecs were given a gift to end the first half after a muffed 12-yard punt by Sleep-Dalton, a right footed kicker using his left because of injury, gave them the ball on ASU’s 18-yard line. SDSU would settle for a 27-yard Baron field goal, and went into the locker room with a 20-14 halftime lead.

The Aztecs defense was able to get to Wilkins in the second half, and finished the game with five sacks after not recording any in the first two quarters. Junior defensive linemen Noble Hall and Chibu Onyeukwu led the team with 1.5 sacks each.

“Our guys started coming a little bit harder,” SDSU defensive coordinator Danny Gonzales said. “We were doing the same things (as in the first half); we were just playing a little bit faster.”

Both teams traded defensive stops to begin the third quarter, before a turnover on downs gave the Aztecs good starting field position at their own 42-yard line.

SDSU’s ensuing 11-play drive ate up over six minutes of clock, and was punctuated by Penny’s 33-yard touchdown, when he took a screen pass on 3rd-and-21 all the way untouched into the endzone for his third score.

Penny would finish the game with touchdowns rushing, passing, and returning, making him the first player to accomplish the feat in the FBS this season. Penny finished with a game-and-career-high 216 yards on 18 rushes.

The Sun Devils found themselves down 30-14 to start the final quarter, but stayed alive after a 53-yard hail mary touchdown pass from Wilkins to redshirt freshman receiver Frank Darby brought ASU back to within 10 with 8:34 to play. Wilkins’ throw came after back-to-back Aztec sacks by Onyeukwu and junior linebacker Ronley Lakalaka, setting up a 3rd-and-37.

After the Sun Devils misfired on a critical two point conversion attempt, SDSU began to eat time, running almost six minutes off the clock before turning the ball over on downs on ASU’s 30 yard line.

The Sun Devils could not recreate the magic of their previous drive, and after another hail mary pass to Darby fell harmlessly to the ground, SDSU’s second win of the season was secured.

“We just have to do better. We beat ourselves. We have to give them credit, but when you turn the football over, get holding penalties and get sacked, I thought the whole time we would come back and win,” Graham said. “Our guys showed heart, but it didn’t count on the score board. We have to do better than that.”