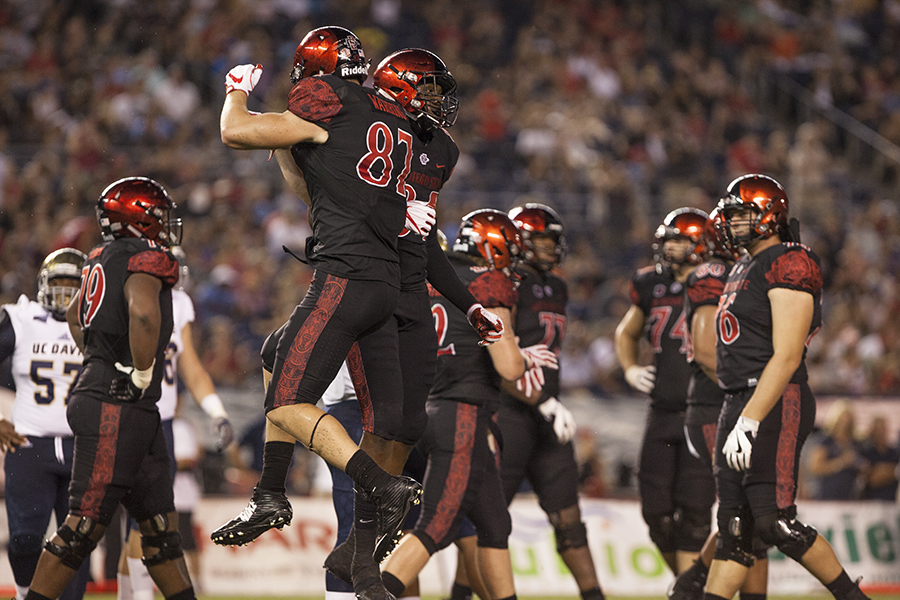 No. 22 ranked San Diego State defeated the Air Force Falcons 28-24 on Saturday, overcoming an 88-minute-long lightning delay at the midpoint of the second quarter, to start the season 4-0 for the first time since 1981.

Air Force jumped out to a 9-0 lead in the second quarter, scoring the first touchdown of the game on a 29-yard rush by junior running back Ronald Cleveland.

Then, flashes of lightning forced play to be suspended at Falcon Stadium.

Both teams headed into the locker room with 7:56 to play in the first half, and for the second time in as many weeks SDSU was involved in a game stoppage.

SDSU endured a 22-minute delay in their game against Stanford University last weekend after a stadium power outage.

The break in the action may have been a blessing for the Aztecs, who looked outmatched and under-prepared for the elements.

“The first quarter and eight minutes they totally dominated us on defense,” SDSU defensive coordinator Danny Gonzales said. “They were just physically beating us.”

After not completing a pass before the delay, SDSU redshirt junior quarterback Christian Chapman — who finished with 180 yards passing and one game-winning touchdown — completed the first pass he threw after play resumed, moving into the red zone on a 42-yard pass to sophomore tight end Kahale Warring. Following a pass interference call on the Falcons, senior running back Rashaad Penny ran the ball in for a two-yard touchdown, his first of a career-high three rushing touchdowns on the night.

“When we came in after lightning break there was no magic adjustments,” Gonzales said. “It was, ‘hey, we believe that we’re tougher than the guys that we play against, and if ya’ll want to have a chance to win you better change your way,’.”

The Aztecs were the beneficiary of good play from both of their top running backs, with sophomore Juwan Washington rushing for a season-high 68 yards on 14 carries, while Penny contributed 128 yards on 20 carries with his three scores.

The biggest play on the ground for SDSU was a 53-yard touchdown rush from Penny with 5:39 left in the game, which turned out to be the winning score. The big play in the passing game came on a fourth quarter 28-yard touchdown pass from Chapman to senior tight end David Wells, which put the Aztecs back on top during a back-and-forth final frame.

“Parker played his tail off, he was super physical, he got off blocks, he made a ton of tackles that if he doesn’t make the tackle it’s going to be a big big gain,” Gonzales said.

On account of the long delay both teams agreed to forego the halftime break, and in the second half miscues nearly cost the Aztecs.

“That’s something you can really build on,” SDSU offensive coordinator Jeff Horton said. “To maybe not play your best but still find a way to win the football game says a lot about the character of the kids.”

The first turnover came after SDSU drove to the Air Force 10-yard line with 12:17 to play in the third quarter, but failed to score after Chapman lost his first fumble of the season after a sack by sophomore defensive lineman Mosese Fifita.

Still looking for their first lead of the game, a 20-yard touchdown rush by Penny, his second of the game, finally put the Aztecs on top with 1:49 to play in the third quarter.

From there the teams traded scores.

SDSU committed their second big mistake of the half after Air Force turned a blocked punt at the start of the fourth quarter by junior defensive back Garrett Kauppila into seven points. Following the block the Falcons started at the Aztecs five-yard line, and turned the good starting position into a two-yard touchdown run by senior quarterback Arion Worthman.

Worthman attempted only five passes in the game, with his only completion coming on a two-point conversion completion to senior wide receiver Tyler Williams.

The Aztecs answered on the 28-yard passing touchdown from Chapman to Wells, his second receiving touchdown in as many games.

The Falcons last chance fell short, after Lomax intercepted a Worthman fourth down pass with 1:32 to play.