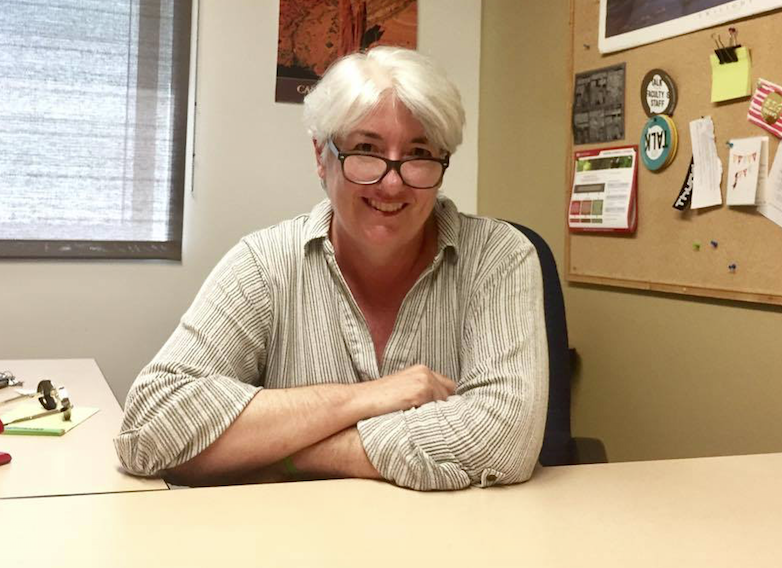 Professor Dae Elliott in her office located in NH-212.

San Diego State sociology professor Dae Elliott offered an extra credit assignment that has attracted unnecessary controversy. For the last 23 years, Elliott has assigned an optional checklist titled, “White Privilege: Unpacking the Invisible Knapsack.” It is intended to open students’ minds to certain privileges they have been given which they may have been previously unaware of.

Despite implications made by the media that Elliott wrote the quiz, it was written in 1988 by social activist and researcher Peggy McIntosh, and was created during the second wave feminist movement. It was used in lesson with a Frontline documentary, chapter from the course’s textbook and Pamela Rothenburg’s article, “Invisible Privilege”.

Elliott said the point of the optional assignment is to create dialogue among her students. The class engages in a 20 minute discussion about privilege once students have submitted their work. She claims that in the last two decades, it has been one of the most popular assignments and has received zero criticism from students in her classes.

Students can receive three extra credit points upon its completion.

McIntosh’s checklist lists some of the ways in which “we all have privilege,” said Elliott.

The condemnation that Elliott has received from right-wing media including Fox News, Bill O’Reilly and the Daily Wire is unjust due to the purpose of the assignment.

Political Science senior Brandon Jones, president of the SDSU College Republicans, said he did not feel the need to speak with Elliott about the assignment and that she is engaging in “left-wing indoctrination.” He said a member of his organization is a student in Elliott’s class and approached Jones with the assignment.

Jones says he alerted the media out of concern that conservative students struggle to find a voice. It appears that his reason for bringing national attention to the assignment is to further expose the liberal agenda present in college campuses.

“[I really don’t] care what her lecture was based on. It’s extremely inappropriate for her to assign something like that,” he said.

Jones should have spoken to Elliott to see whether the assignment had any political and/or racial implications and the reason she offers it to students.

If the student that spoke to Jones was concerned with the assignment, she should have approached her professor. Jones claims that a “university is a marketplace of ideas where ideas can be shared.” The student should have done just that –– shared her views privately with her professor to create positive dialogue in which views that may be different from her classmates can be heard.

Jones is correct that the country is plagued by political and racial separations — but not in this case. Elliott’s assignment unifies students in bringing them together to share their stories. In choosing to discuss his disapproval with the media rather than the source, Jones is not working towards restoring the division in the U.S..

Since her assignment went viral, Elliott has received numerous insensitive emails, one in which the subject reads, “You F…ing [N-word] Lover.”

Comments such as this downgrade the discussion to a level unworthy of attention.

Political science senior Michael Cline, President of the SDSU College Democrats said that he has taken a similar quiz and describes it as too simplified.

“You can’t summarize somebody’s life in 20 questions––we can’t assign a number and root people based off of that,” said Cline.

Conservative students may feel discouraged because their voices aren’t being heard. However, this is not the case in Elliott’s classes. The curriculum the assignment is part of encourages students to recognize the benefits they enjoy in everyday life.

Students can address these privileges by communicating with one another. The checklist is a fun way to do so and has allowed Elliott to ignite discussion for the last two decades.

“We all see the world from a different place and we can’t see the objective world because we’re all seeing it from one perspective,” Elliott said. “We can approximate objectivity by communicating and seeing it intersubjectively. We’ll never step out of our subjectivity if we don’t listen to each other.”

San Diego State is experiencing political upheaval and such frivolous controversies do not create a unified and welcoming environment for the student body.