Open forum held for selection of SDSU’s next president 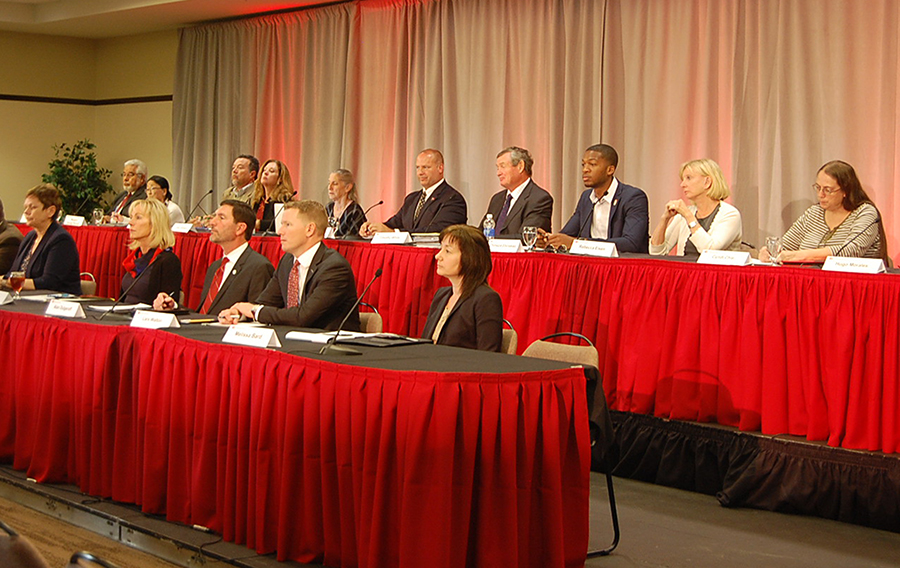 San Diego State’s Presidential Search Committee held its only open forum to gather criteria and character traits desired by the campus in choosing the next university president at the Parma Payne Goodall Alumni Center on Sept. 25.

Led by California State University Trustee Adam Day as the search committee chair, the panel listened to public comments from SDSU students, alumni, faculty, staff and administrators, as well as local residents from the College Area.

“SDSU is a very special campus – they have the distinction of having only eight permanent presidents in the last 120 years, which is a remarkably small number for a large number of decades,” Day said. “It is my hope that our committee can find the keys to the next best president for San Diego State University.”

For the remainder of the year, CSU Chancellor Timothy P. White will work with search consultants R. William “Bill” Funk and R. William “Willie” Funk of higher education headhunting firm R. William Funk & Associates. Together with the search committee, they will be looking for appropriate candidates for SDSU’s new president, with plans to make a selection in January, Day said.

Names of applicants for the job will be withheld during the selection process in order to entice more potential applicants who are currently employed at other institutions of higher education, according to CSU Chancellor Timothy P. White.

White said the purpose of this is to give the university the opportunity to recruit people who are currently employed at other campuses.

“Based on experience, many of the very best candidates cannot afford to have their current employer know that they might be interested in the leadership position at San Diego State,” White said. “It’s a professional courtesy for applicants.”

Sally Roush, SDSU’s interim president, was appointed to her position in May by the chancellor after former president Elliot Hirshman announced in March that he would be leaving for Stevenson University in Maryland. The job description to be used in the search for a permanent president will reflect comments made during open forum, Day said.

During public comments, some speakers said they want a president who will help foster more campus support for marginalized communities.

One such speaker, bioengineering graduate student Mari Cruz, spoke on behalf of student organizations that represent ethnic and misrepresented groups on campus. She called for a president who is not only supportive of students of color on campus, but also has a track record for supporting diversity on other college campuses.

“I want to make sure that it is taken into account that the new president is culturally aware of the diversity on this campus,” Cruz said. “We’ve had some difficulty getting through to leadership to try to get support — a lot of students feel that they don’t have support from leadership — and it is such a diverse campus that I think that should be a priority on the job description.”

Associated Students Sustainability Commissioner Charlotte Roberts shared her opinion about the importance of a sustainability-minded president for her generation and the future.

“I feel very proud of the climate action plan that was signed by President Hirshman last year, and I hope to see that our future president values this climate action plan and upholds its goals, as well,” Roberts said. “We are going to be living on this earth for many more years, and there is over 97 percent scientific consensus that the effects of climate change are indeed anthropogenic, meaning human-caused. I would like to feel proud of my university for decreasing our impact on climate change as much as possible.”

SDSU and Sigma Alpha Epsilon fraternity alumnus Dick Troncone called for a new president that would defend SDSU’s Greek life, or at least be “Greek-friendly,” he said.

“I feel that the Greek community has been a huge supporter of the university over the years,” Troncone said. “If you go outside and look at the donor board, you will see a lot of big contributions that came out of the Greek community. I know in a lot of cases, fraternities and sororities are being discouraged on campuses, and I understand that because if you look at the papers and look at the various incidents that have risen to the national news, there are really some terrible things, but we have a good system here with a long demonstrated support of the university.”

Representatives from the campus population also spoke out on both sides of the debate of valuing teaching over research, and vice versa.

“We are very much interested in research and very impressed with the research agenda and accomplishments at San Diego State — in fact, both my husband and I continue to do research and continue to publish,” Cottrell said. “But we really feel that the role of teaching and the teaching faculty has been undervalued in recent years.”

Stating that the sociology department had twice the number of tenured faculty when she started at SDSU in the late 1960s than it currently has, Cottrell said that “teaching has been admirably done by adjunct faculty.” She said that many of the adjunct faculty in her department win campus teaching awards, but that she feels that it is akin to “slave labor” that shouldn’t be depended upon.

Global Change Research Group Director Walter C. Oechel said that he hopes the future president will continue the support of research on campus.

“I’m very concerned that we continue to see that continue,” Oechel said. “We had the first Ph.D. programs in the (CSU) system, we have funding for research that is in excess of many UC campuses, if we were in another state we would be the degree-granting Ph.D. institution in the state. It just means a lot that for many of us who work very hard to move us slowly up the ladder in terms of quality of research, quality of graduate programs, excellence in undergraduate teaching and the accomplishments of undergraduates.”

Other concerns addressed during the forum included concern over increasing the ratio of seats in the library to the size of the student population, a desire to have the campus’ information technology updated, increasing the knowledge of the Chicana/o and Latina/o experience on campus and support of SDSU co-sponsoring the proposed Soccer City project

Although the meeting was the only open forum to be held during the selection process, those interested in making public comments may email the committee at presidentsearch@calstate.edu.