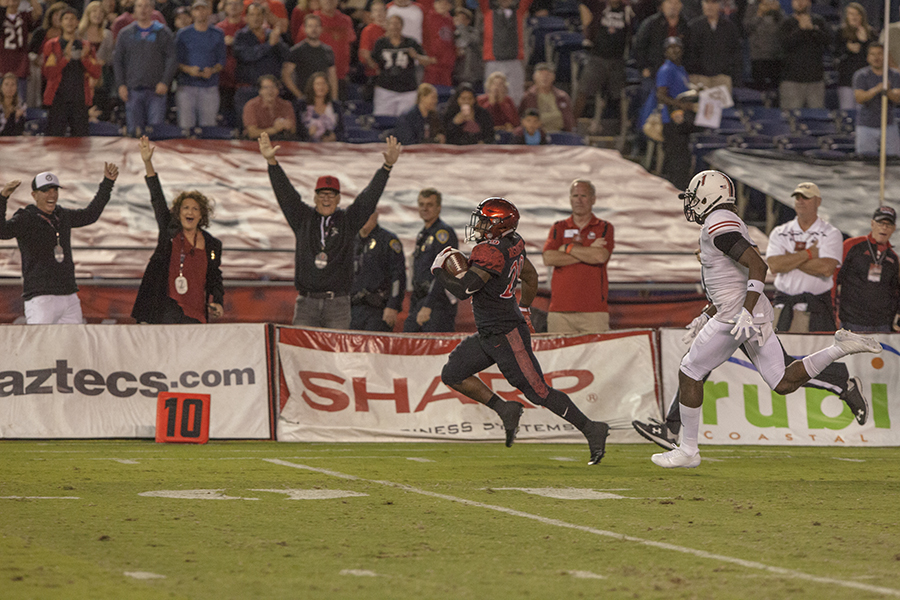 Then-sophomore running back Juwan Washington returns the opening kickoff 96 yards for a touchdown during SDSU's 34-28 win over NIU.

No. 19 San Diego State football reached 5-0 for the first time since 1975, scoring on offense, defense and special teams in its 34-28 win over Northern Illinois University on Saturday night.

Playing at the newly-named SDCCU Stadium, the Huskies would stay hot on the Aztecs’ tail all night long, and entered the fourth quarter down 31-28. NIU had an opportunity to win the game late, but had its drive stall after SDSU senior cornerback Kameron Kelly intercepted sophomore quarterback Daniel Santacaterina near the end zone with 2:23 left in the contest.

“At the end of the game we told ourselves that we can’t let it slip away,” Kelly said, “and we’ve got to stay together and pull it out.”

A three-and-out by SDSU gave the Huskies one last chance, starting at their own 15-yard line with 1:58 to play, but the Aztecs sealed the victory after freshman safety Tariq Thompson’s second interception of the night.

SDSU has now won seven straight games dating back to last season, and 13 of its last 14 home games.

“I feel like we’re starting to have an obsession with winning and we’ve got to keep that going,” Kelly said. “We can’t lose at all. We can’t. Can’t even get this close to losing again.”

Long said that despite the win, he felt his team was not the most consistent on Saturday night.

“I thought Northern Illinois outplayed us,” Long said. “The difference was we made big plays, we made big turnovers – that’s the only thing that saved the game.”

The Aztecs ability to win tough games while overcoming adversity tells Long that there is something different about his team.

“I think that we’re a team that believes we’re going to win,” Long said, “and we made enough big plays to win the game. There’s a lot of teams in the country that will wilt in those situations and give up. We’re not like that.”

The Aztecs got off to a fast start, when sophomore running back Juwan Washington returned the opening kickoff 96 yards for a touchdown.

The touchdown appeared to set the tone for a wild first quarter, which had a total of 28 points scored, and saw the Aztecs lose their top wide receiver, senior Mikah Holder, who was ejected after being called for targeting.

In the second quarter, Thompson gave the Aztecs a lead they wouldn’t relinquish after he intercepted Santacaterina and returned the ball 83 yards for a touchdown.

The Aztecs never trailed in the game, and held a 31-14 halftime lead. SDSU shut out the Huskies in the second quarter, while scoring 17 points behind Thompson’s defensive score and an 8-yard touchdown pass from junior quarterback Christian Chapman to sophomore tight end Kahale Warring.

NIU got off to a quick start in the second half, scoring on an 81-yard touchdown pass from Santacaterina to sophomore wide receiver Spencer Tears to make the score 31-21.

Santacaterina, who began the season as the Huskies backup quarterback, finished the game with 269 yards to go with three touchdown passes and three interceptions.

Santacaterina’s favorite target in the game was senior wide receiver Christian Blake, who had 13 receptions for 160 yards and two touchdowns, both in the first quarter.

SDSU running back Rashaad Penny was sidelined briefly in the first half, after NIU sophomore linebacker Antonio Jones-Davis appeared to reach his hand into Penny’s helmet and poke him in the eyes.

Penny would have to leave the sideline to get eye drops from the locker room, missing one series.

“I just think that stuff shouldn’t happen,” Penny said. “I thought we were all more mature than that. I can’t thank my teammates enough because they picked me up when I was down.”

Penny came into the game ranked second in the FBS in rushing yards, and finished with 107 yards rushing on 25 carries.

On the other side of the ball, NIU senior running back Jordan Huff ran for 148 yards on 25 attempts.

“Chief (Rosales), he’s kind of the voice of the o-line,” Chapman said, “he gets us going, he pumps everybody up. So losing someone like that it’s going to be an impact.”

The Aztecs held a plus-four turnover advantage, and Chapman did not throw an interception for the fourth straight game.

Chapman finished with 136-yards passing and two touchdowns, the first of which came on a 33-yard strike to Penny, after a fumble recovery by freshman middle linebacker Andrew Aleki gave the Aztecs good starting field position.

SDSU linebacker Jay Henderson led the team with three sacks, a career-high for the senior.

The Aztecs struggled to limit self-inflicted mistakes, and the team committed 10 penalties for a total of 126 yards.

SDSU converted only seven first downs in the first half, but were able to put up 31 points thanks to its special teams and defensive contributions.