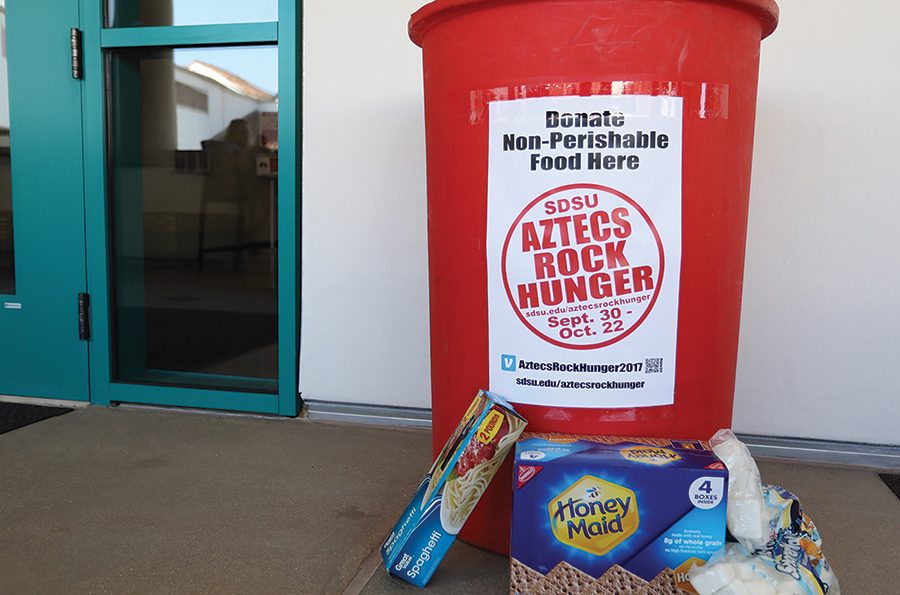 There are a variety of Aztecs Rock Hunger donation bins around campus.

Associated Students’ campaign for addressing local food insecurity is officially in full effect and aims to collect a total of 500,000 pounds of food within its three-week span.

Willis and A.S. Marketing Communications Commissioner Sam Emami both described the prevalence of food insecurity within SDSU and the city of San Diego as a motivating factor for the campaign.

“Every year we’ve been exponentially growing,” Emami said. “Us, as a school, can utilize all our resources and utilize our platform to raise money and donate to help fix that problem.”

“In San Diego, there are over 400,000 people that were estimated to have food insecurities, some of which are on our very campus,” Willis said.

Aztecs Rock Hunger, a campaign that began in 2010, will once again be teaming up with the Jacobs and Cushman San Diego Food Bank to help reach their goal. Funding from the campaign will help to pay for food through Jacobs and Cushman, some of which will go back into the A.S. Food Pantry.

“The easiest way for everyone to donate with the biggest impact is to simply donate $1 via Venmo, because $1 stretches to 5 to 6 pounds of food,” Emami said.

There are other ways to donate to the cause.

Anya  Shutovska, a student-at-large representative for  the  A.S. Board of Directors, said students and community members can donate through the online virtual  food pantry (which is tax-deductible) via Venmo (@AztecsRockHunger2017), through collections at Aztec football and soccer games and when they are checking out in any Aztec Market or through the Aztec Proud campaign.

“Donating through Aztec Shops works very well for our on-campus residents who have the meal plan, since they’re able to donate the rest of their meal plan when they’re spending at Starbucks or University Towers Kitchen or something of that sort,” Shutovska said.

Through the Venmo account, which was started last year, A.S. hopes to foster more competition between student organizations, a new approach in the Aztecs Rock Hunger campaign. The incentive would be recognition at an awards ceremony in November, Shutovska said.

Also new this year, the campaign is seeking to extend their reach through new marketing tactics, aiming at getting the surrounding community and SDSU alumni involved.

“Local businesses are a great outlet for the local community to get involved,” Willis said.

This could include donating a percentage of their proceeds for a certain day to the campaign or having collection bins at their locations for non-perishable donations, Willis said.

The local business that provides the most donations will also be recognized at the ceremony in November, he said.

“One thing that is new this year is that we’re reaching out to our SDSU alumni,” Shutovska said.“Many of them were very passionate in the past as well.”

Shutovska, Willis and Emami all recognize that the issue of food insecurity goes far beyond just these three weeks in October.

“While this is a three-week campaign, we understand that this is a year round issue,” Willis said.

Willis recommends that, for students who want to help eradicate the issue of food insecurity year-round, there are opportunities to help through campus organizations such as A.S. No Waste, CalFresh and the A.S. Food Pantry, which is always taking in new volunteers.

There are also opportunities to volunteer through the Jacobs and Cushman San Diego Food Bank.

“Even if it were just one student with food insecurities, that’s one too many and enough of a reason for us to do something about it,” Willis said.