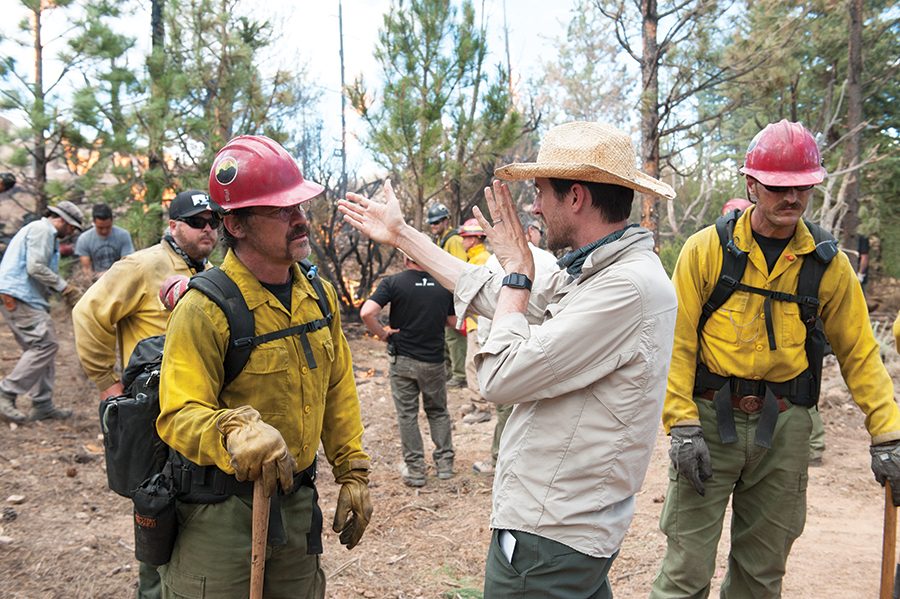 Director Joseph Kosinski speaks with actor Josh Brolin while on the set of Columbia Pictures' "Only the Brave."

On June 30, 2013 a group of firefighters known as the Granite Mountain Hotshots led the way into the deadly wildfires of Yarnell Hill in Arizona, risking their lives in order to protect others.

Sony’s new movie “Only the Brave” features the true story of the hotshots and the dangers they encounter as firefighters.

The film focuses on the lives of the firefighters both in and out of uniform. Academy Award nominee Josh Brolin plays the role of Eric Marsh, the crew’s superintendent and oldest member.

Brolin said when he was younger he volunteered as a firefighter in Arizona for three years, but his experience was nothing like that of the Hotshots.

“You know having been involved in that community for a very long time I had never been in the situations that these guys are in and both James Badge and I are very humbled by the experience of having saturated ourselves in it for maybe six months, but these guys are here year after year, season after season,” Brolin said.

“The hardest part for myself was the pressure of playing a man like Jesse Steed who I thought to be a better man than I was,” Badge said. “He was a man who was present, he had the strength and the bravery to come up to people and give them a hug and say I love you.”

“Any kind of vanity or entitlement that anybody brought in as actors I think was appropriately stripped away,” Brolin said.

The timing of the movie release coincidentally aligns with the recent wildfires occurring in Northern California. As these fires continue to spread, the death toll has risen to 41 as of Oct. 17 according to the Los Angeles Times.

“It’s incredible the disastrous nature that these fires can have,” Brolin said. “The movie obviously makes very conscious the peril that these men and women put themselves in everyday in order to assure our safety as best they can.”

The story of the hotshots brings to light the hardships and tragedies that the men and women who choose this career path put themselves in daily. Not only do they act selflessly, but they act with courage and the strength to separate themselves from their families and risk everything they have to protect complete strangers.

The movie’s motto is “It’s not what stands in front of you, it’s who stands beside you.”

“(The motto) speaks for itself you know,” Brolin said. “These movie quotes all kind of sound cliché and dumb and you think of the deep voice guy who is saying them, but at the same time when you deconstruct this one I think there’s a lot of meaning and resonance.”

The movie highlights the Granite Mountain Hotshots and the tremendous sacrifices they made.

“Only the Brave” hits theaters in San Diego on Oct. 20.