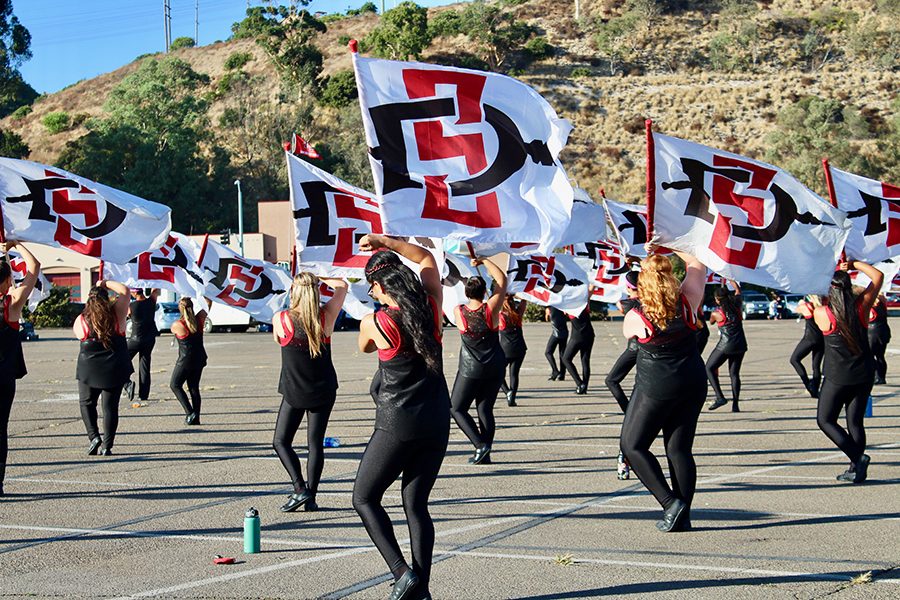 San Diego State's color guard practices in the parking lot of SDCCU Stadium. The stadium site could be the site of a new west campus for the university if Friends of SDSU has their way.

Friends of SDSU, a group dedicated to a ballot initiative for the creation of a new west campus for San Diego State on the current site of SDCCU Stadium, began its signature gathering efforts Oct. 21, the day of the university’s homecoming football game.

The group hopes to get the SDSU West Campus Research Center, Stadium and River Park Initiative on the November 2018 ballot. The initiative would allow for the sale of much of the SDCCU Stadium site to SDSU, freeing the university to build a satellite campus in Mission Valley that could potentially include student housing, research and technology facilities, a river park and a new multi-use stadium.

The choice to start signature gathering during the culmination of San Diego State’s homecoming festivities wasn’t a deliberate one, but rather one of serendipitous timing, said SDSU West spokesman Fred Pierce.

“It coordinated perfectly with our schedule,” Pierce said. “We had a 21-day notice period where when we published the initiative, we had to actually print it in the newspaper. And it just so happened that when we looked at the schedule, 21 days ending up on homecoming was perfect timing.”

For the initiative to appear on the 2018 ballot — alongside the rival SoccerCity plan — it needs to receive more than 71,000 signatures from San Diego residents by the end of December. The group anticipates a healthy level of support, especially from alumni.

“One in seven college graduates in San Diego attended SDSU,” Friends of SDSU steering committee member Gina Champion-Cain said in an Oct. 20 press release. “We’re hoping to see these proud alumni at the game and convert their support of the university into a signature for its future.”

The group had booths set up at various places around SDCCU Stadium before Saturday’s football game, staffed with dozens of signature gatherers and flyers about the initiative for uninformed or interested voters.

One signature gatherer, Stephanie Mercy, said she believes San Diego needs a sports team and could see SDSU West as a viable option, but that she’ll hold out until both the initiatives are released for San Diegans to make the final decision.

“At this time I don’t know, let’s see both proposals and make a decision on Election Day,” Mercy said. “It’s a way of giving us choice and I’m all about choice.”

However, the stadium is just the beginning. Pierce said SDSU is landlocked, and that expansion would not only bring more potential students to San Diego State, but more innovation in research, technology and business.

“We need room for growth for new students, we need growth for research activities, technology transfers and business incubation,” Pierce said. “We also need a new football stadium. It’s been threatened that they are going to tear down Qualcomm and the stadium that the opponent initiative, SoccerCity, has proposed doesn’t work.”

The stadium seems to be the turning point for potential voters. Longtime SDSU football and Major League Soccer fan Jose Flores said he is leaning toward SDSU West but wants to hold out to see stadium renderings before making a final decision.

“Being a fan of both (SDSU football and Major League Soccer) I’m kind of torn,” Flores said. “It seems like SDSU West would have the bigger stadium and it could cater to both sports but I would love to see what the designers come up with before making my mind up.”

Along with SDCCU Stadium, signature-gathering efforts also launched at different locations around the city, with nearly 75 signature gatherers available to share information with voters, Friends of SDSU said.