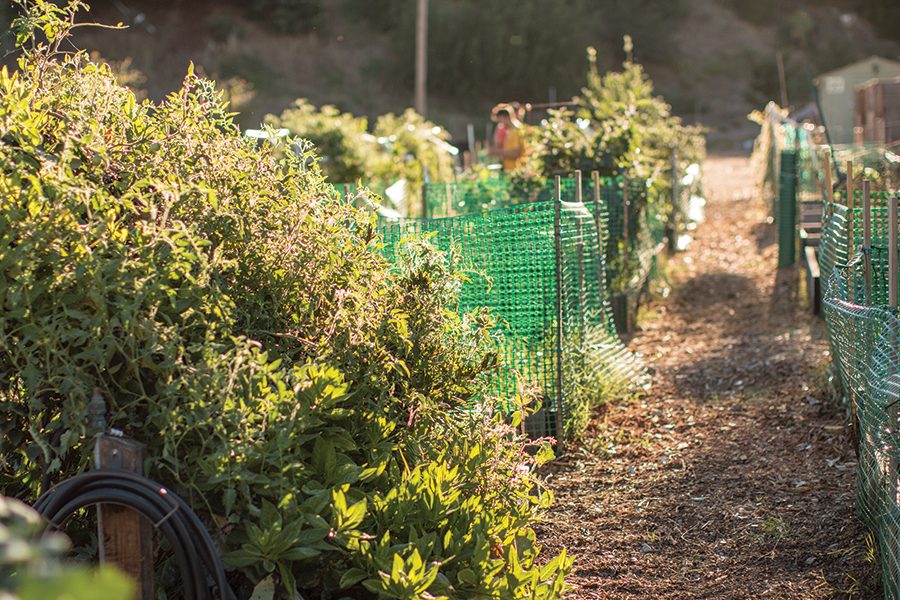 Dining services has been partnering with the College Area Community Garden since 2014.

“There are no herbicides, pesticides or anything harmful to the Earth, the plants or people,” he said.

In addition to organic farming, the garden aims toward environmental sustainability by having tanks to capture rainwater and solar panels that produce more energy than the garden uses, Bertram said.

Since establishing its partnership with CACG in 2014, Dining Services has also begun growing produce in other areas.

This summer, Dining Services installed 20 aeroponic towers, which are nutrient-driven towers, on the patio of The Garden restaurant, Glebus said. The environmental benefit of these towers is that they use a fifth of the amount of water that would be used by conventional gardening.

“We really don’t have a lot of space,” Glebus said. “We had to get creative because we’re a pretty urban campus.”

Kelly Verakis, a biology junior and co-chair of the Green Love Garden Committee at SDSU, said she is happy to see that Dining Services is participating in sustainable gardening.

“I love that SDSU has incorporated this into the dining services,” she said. “That is beautiful.”

Glebus said the success of the Campus Grown campaign has been due in part to the dedication of students.

“Students pretty much run it,” he said. “It’s my ideas and their green thumbs.”

Trevor Toia, a sustainability junior at SDSU and the lead gardener for Dining Services, had a large part in establishing the gardens on campus.

Toia helped install the aeroponic towers, and designed and built structures for the garden outside of the Faculty-Staff Club on campus, Glebus said.

“Working with the (aeroponic towers) is really fun,” Toia said. “We’re pumping out an amazing amount of product. I like coming in every day and being able to see more growth, more progress.”

Growing organic produce on campus is not only healthier for those eating it, but also reduces carbon dioxide emissions by negating costs for packaging and transportation, Toia said.

Janissa Reyes, associate director of marketing for Aztec Shops, said Campus Grown will be hosting a tour of the on-campus gardens on Nov. 7 from 4:30-6 p.m. Students can RSVP for the tour through the Campus Grown website.

“We want to get people to know where their food is coming from,” Glebus said. “It’s coming from right here.”