Tegan and Sara reflect on ‘The Con’ 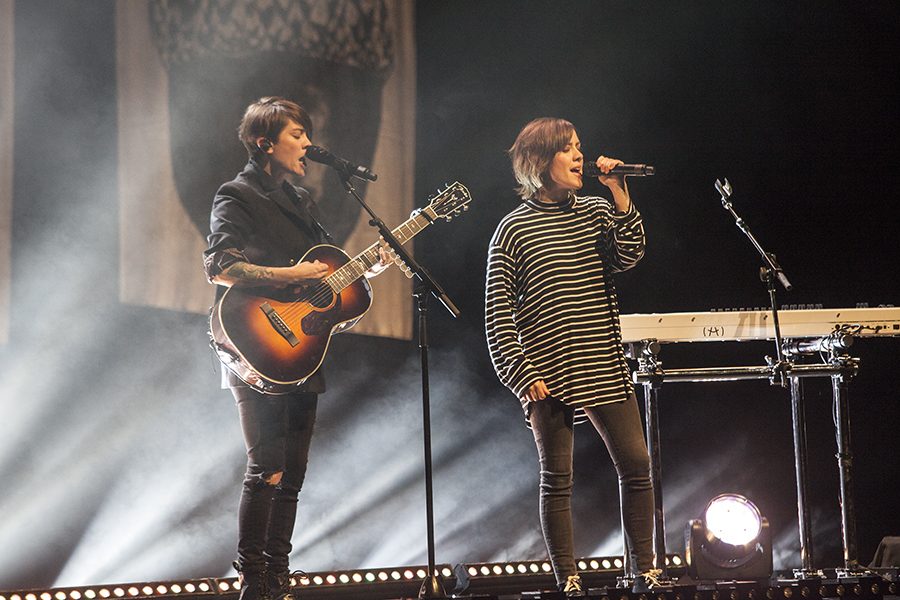 “I married in the sun,” Sara Quin sang the opening lyrics to her and her twin sister’s 2007 album “The Con” to a crowd who had grown up loving the now decade-old record.

“Tell me where, tell me where,” Tegan Quin finished the “I Was Married” lyric in response.

The duo kicked off its “Con X” tour in commemoration of the album’s 10th anniversary on Friday, Oct. 20 at the Balboa Theater, coinciding with the release of “The Con X: Covers,” a track-for-track tribute to the record, featuring artists like Paramore’s Hayley Williams, Chvrches, Ryan Adams and Cyndi Lauper.

Tegan and Sara are honoring their groundbreaking, yet long critically ignored, record by their own volition, securing its place in queer music history and the indie rock canon. The duo is also using the cover album, tour and merchandise proceeds toward their Tegan and Sara Foundation, supporting LGBTQ+ women.

The concert was a stripped-down retelling of “The Con,” both musically and verbally — in between acoustic renditions of the tracks the sisters traded stories of how the album came to be, making a 1,400 seat theater feel like an intimate living room gathering.

Before performing the album’s sixth track, “Back in Your Head,” Tegan recalled how their label wanted them to make the record top-heavy, so those who purchased CD’s would be more inclined to listen all the way through.

Yet, the twins put the most pop-friendly track deeper in the album at the sixth spot behind, as Tegan hilariously and self-deprecatingly described, “barely songs” like “I Was Married,” “Relief Next to Me” and “Are You Ten Years Ago,” as well as a “failed rock single” like “The Con.”

“They don’t care about that,” Sara responded to the story for the audience.

Tegan was right, but the audience would devote their full attention to any anecdote the duo shared, whether it be “Con”-related or Sara talking about smoking marijuana around her cats or just basking in the sisters’ charisma. Fans were hungry for any history unearthed about the record they’ve long loved as it finally receives the respect it deserves.

Tegan then went into “Hop a Plane,” but was soon interrupted by her bandmate after singing the song’s first line: “I took the train back / Back to where I came from.”

“When did you take a train anywhere?” Sara asked. “And back to where? That’s what I want to know.”

The banter took a serious turn as they delved deeper into the record, with Sara admitting she associates “The Con” with a difficult period in her life.

“I’ve always thought the record was great but it was a tough one,” she said. “I never got to play a lot of the songs with any enjoyment or happiness. I always felt sort of depressed when I was playing them back then. For those of you who love this record, I hope that you find some peace, too, in hearing the songs updated. This experience has made me feel much happier about that time in my life.”

The connection the audience had with “The Con” was made even clearer during a heart-wrenching sing-a-long of the album’s closing track, “Call it Off,” followed by a fan in the front row earnestly handing Tegan and Sara each a bouquet of flowers as a symbol of gratitude.

The twins continued the show with a handful of songs from throughout their career — “Now I’m All Messed Up” from 2013’s “Heartthrob,” “The Ocean” from 2009’s “Sainthood,” “White Knuckles from 2016’s “Love You to Death,” “Living Room” from 2002’s “If it Was You” — before ending the night with their most successful song to date: “Closer.”

“I know a lot of people initially were like, ‘Why are they doing pop music?’” Tegan prefaced the performance of their crossover hit. “For us it was about staying interested and excited, but also making small gestures to change the way people see queer women and feminism.”

“It’s so important to have representation from queer artists like Tegan and Sara,” communications junior Julia Goldberg said. “It breaks the exclusively heteronormative trends. We are so shaped by mainstream media, so when we have diversity in the music industry we are that much closer to accepting and appreciating that diversity in everyday life.”

For the fans in the room and the artists featured on “The Con X: Covers,” Tegan and Sara had already long been champions of queer art and representation before “Closer,” but like with their celebration of “The Con,” that makes seeing the duo hailed as such in the public eye mean so much more.