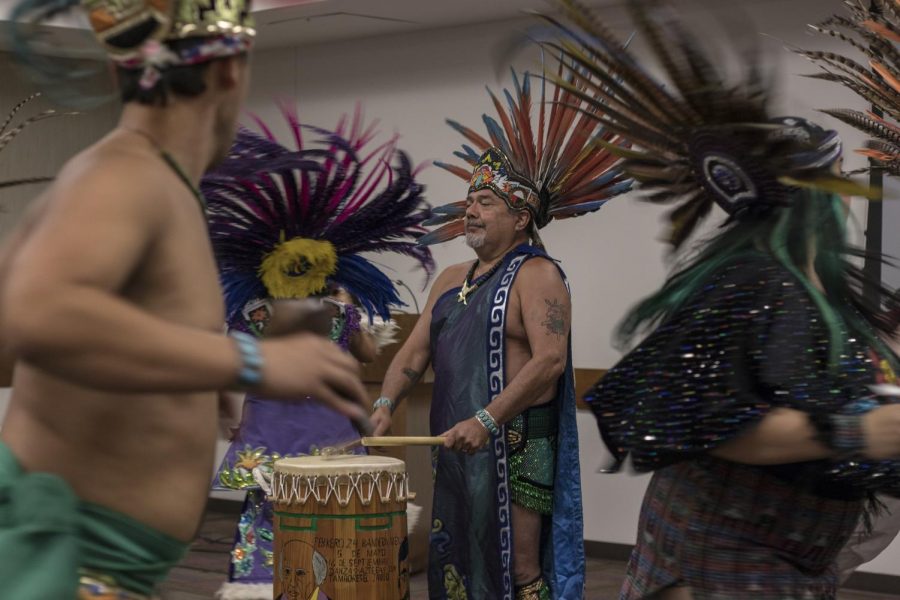 An Oct. 24 Campus Dialogue event, hosted by One SDSU and the Center for Intercultural Relations, brought attendees back to a familiar controversy regarding the Aztec mascot through a conversation about indigenous cultures.

“We (indigenous peoples) are going out to battle against darkness,” said Mario E. Aguilar, leader of the Mexi’cayotl Indio Cultural Center in Chula Vista. “Today, the darkness that we face is called racism.”

The University Senate will hold an open meeting on Nov. 7 in the Arts and Letters building in room 101 to talk about the Aztec mascot. A.S. Vice President of University Affairs Chris Thomas said the meeting will discuss the possible misappropriation of Aztec culture and the room may be change to accommodate more seating.

Aguilar’s presentation in the Conrad Prebys Aztec Student Union was preceded by a native blessing, and included a conversation on cultural resistance, identity in the face of genocide and cultural appropriation. Later in the presentation, Aguilar took a moment to share his experience talking to Nahuatl speakers about SDSU’s mascot.

“When I asked [the Nahuatl speakers] about the Aztec as a school mascot, they said, ‘We’re happy that a big educational institution in the U.S. finally acknowledges the indigenous roots of Mexico, because all of these centuries we’ve been told we’re nothing by the Mexican government and the U.S. government.,’” Aguilar said.

Aguilar said the tone of the conversation changed once he described the appearance of Monty Montezuma — a now discontinued mascot — to the Nahuatl speakers.

The Nahuatl speakers were upset the mascot was played by a white man, that he wore clothes meant to be worn by a priest during mass, and that the word “mascot” in related to the Spanish word for “pet,” which the Nahuatl speakers perceived as disrespectful word choice.

The Nahuatl speakers said to Aguilar a symbol of of the Aztec culture would be preferred to a person, such as a drum or an arrow.

“San Diego State Aztecs? Go for it,” Aguilar said. Because it makes the indigenous Mexican people proud that a U.S. place of education chooses to honor an indigenous nation in Mexico. But get rid of the clown.”

Communications freshman Kendall Shaver attended the event and said she perceives cultural awareness, especially in relation to the mascot issue, as truly important.

“We walk around with ‘San Diego State Aztecs’ on our shirts with maybe little to no background of what that means,” Shaver said. “It was interesting to hear that [the mascot] is not entirely offensive, although there are parts of it that are offensive.”

Shaver also said conversations about cultural awareness often do not start soon enough, leaving too much time during high school and elementary school for cultural misunderstandings to prevail.

“I took Spanish classes in high school and we would learn about indigenous cultures, but it always seemed super distant and it even followed the stereotypes that they were talking about in the presentation,” Shaver said. “College is usually when you enter a more diverse setting. If you don’t have this kind of experience you’ll come in with a closed-mind or you won’t understand how to be politically correct then it could come off offensively.”

Undeclared freshman Makenna Millham, who also attended the event, said there needs to be more education on these kinds of perspectives.

This is what the Center for Intercultural Relations seeks to do through their monthly campus dialogues, said the center’s program coordinator, Jessica Chang.

Chang said there are many ways, beyond attending such events, to become a more active force for promoting diversity and representation.