Dutcher ready to take the reins 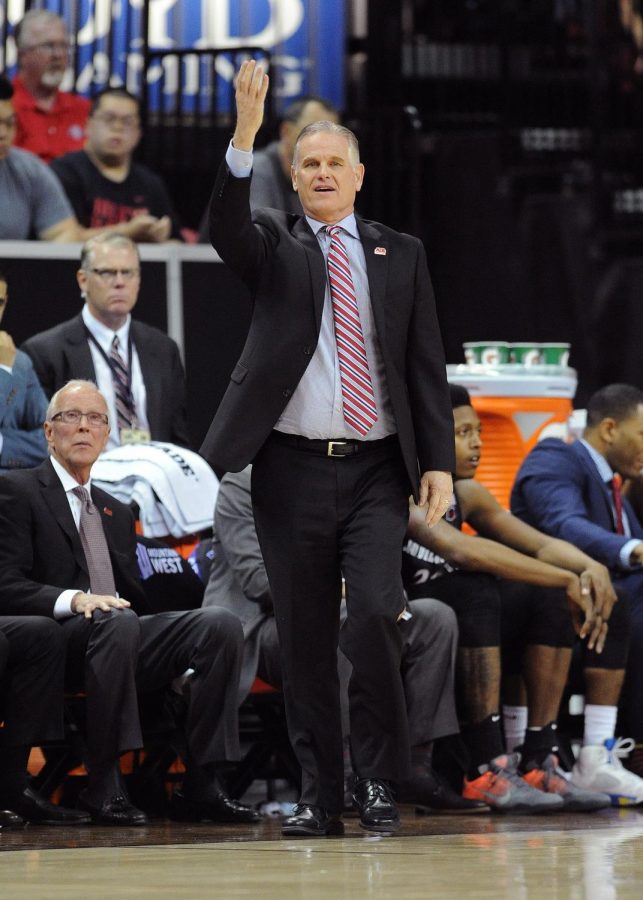 SDSU head coach Brian Dutcher walks the sidelines during the 2016-17 season as Steve Fisher looks on.

Steve Fisher’s retirement at the end of the 2016-17 season opened the door for a new era of San Diego State men’s basketball.

Brian Dutcher, SDSU’s new head coach, is poised to lead the Aztecs down the same path to success as his storied predecessor.

Arriving at the University of Michigan in 1989 as the associate head coach to Fisher, Dutcher helped lead the team to the national championship. Their time together at Michigan would mark the beginning of a decades long relationship, one which ultimately brought the two of them to the Mesa.

Dutcher’s years of schooling in the Fisher academy will be put to the test in his first season as head coach, after the 2016-17 season was filled with injuries to key players and saw the Aztecs first missed postseason since 2004-05.

Dutcher feels like the team needs to play quicker basketball on the offensive side in order to improve on what has been a subpar offensive unit the past two seasons.

“We are looking to increase the tempo in which we play with to try to put more points on the board,” Dutcher said. “Put the kids in the best situation to be successful offensively.”

As has been the case for years on the Mesa, the defense is waiting for the offensive side to meet them in the middle.

Along with maintaining the culture that Fisher established at SDSU, Dutcher is confident in his own skills, and believes with the mentorship of others he can create his own legacy.

“I want to maintain the culture because it’s a culture of winning basketball, social responsibility and academic success,” said Dutcher

Being around the program for almost 20 years, Dutcher has final say at practice, and it is nothing new for the players to see him in a leadership position.

“I think he’s done a good job with just making sure that we don’t lose focus mentally and just keep staying the course and just playing as hard as we can,” junior guard Jeremy Hemsley said.

Coaches are mentors and father figures that these players look up to, and Dutcher speaks volumes to this statement. When it comes to class, character and a authenticity, Dutcher appears to fit the mold.

“He’s really caring,” Hemsley said. “He’s going to do everything that he can to help you on and off the court.”

A coach’s success can also be measured by the way they carry themselves off the court. Those who find themselves in the winners circle are usually those who hold themselves to a high standard to set an example to their players.

Junior forward Max Montana is another of Dutcher’s players who speaks very highly of his new head coach.

“He’s just a high character guy… he cares a lot and he understands that there is more to life than basketball. He is a very humble, down-to-earth person,” Montana said. “He embodies all the characteristics that you look for in a person, let alone a coach.”

While he has yet to set foot in a game as the official head coach, Dutcher is ready to bring success to the Mesa, and with big shoes to fill and high expectations to meet, the new Aztecs head coach is a match made in heaven.