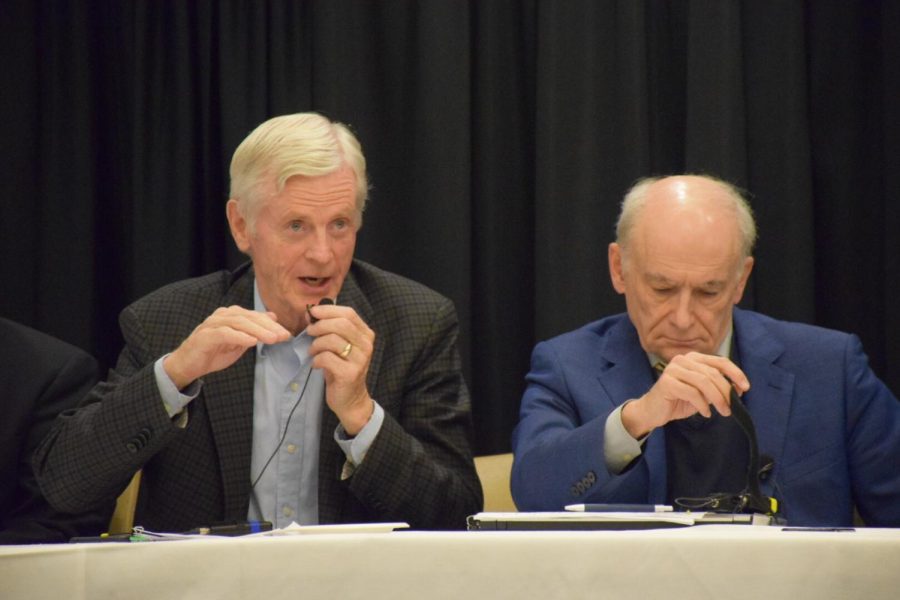 In China, practitioners of a spiritual practice called Falun Gong are arrested without cause, held without trial, tortured, killed and harvested for organs, according to several members of an anti-trafficking panel held on campus last week.

Falun Gong, also known as Falun Dafa, is a Chinese spiritual practice that dates back to the early 1990s. The Chinese government describes it as a terrorist organization, though critics say followers have never been implicated in any violence.

“What’s going on in China in regards to transplantations is mass killing of innocent people and a cover up,” former Canadian Secretary of State David Kilgour said.

Kilgour, and human rights lawyer David Matas — both of whom co-authored two reports and a book on organ trafficking — were among the panelists at the Parma Payne Goodall Alumni Center on Nov. 1. According to their research, there were 41,500 transplants performed with organs from Falun Gong practitioners between 2000 and 2005.

When a census study in 1999 found that there were close to 100 million Falun Gong followers in China, the government, under former president Jiang Zemin, began to imprison practitioners.

Grace Huiying Li, a former Falun Gong prisoner, spoke to the panel through a translator.

“Jiang Zemin was very jealous of the popularity of Falun Gong,” Li said. “He launched the brutal persecution in July 1999 and he declared an order to all the media and all the state-run media to ruin the reputation of Falun Gong to bankrupt them financially and eradicate them physically.”

Describing the torture that she saw and heard of while imprisoned in China, Li said her father died after a year as a result of the abuse. She said she was held in the labor camp for three years, working 16 to 17 hours per day.

Women in the prison camp were forcibly penetrated with inanimate objects such as broken mop handles and jagged glass, Li said. When she asked prison guards about the torture that other women had suffered, she was locked in a cage as punishment.

“I was so outraged, so when I saw the head of the prison guards I questioned her,” Li said. “They said I was spreading rumors, so they locked me in the iron cage. They handcuffed my arms to the back and I stood there for seven days and seven nights with sleep deprivation. The images of those days are hard to forget — to this day, it still haunts me.”

She said everyone in the prison camp would have their blood tested even though they did not receive medical treatment after being tortured.

Blood testing is suspected to be used to make antemortem matches of prisoners to those in need of organ transplants.

Dr. Shizong Chen, an anti-trafficking activist who works in the biotechnology, talked about the differences between ethical and unethical organ transplantations.

“In parts of the world with ethical organ transplantation, they maintain databases of waiting lists that help patients match to available organs that often come from unpredictable tragedies,” Chen said. “Instead of that, in China, there is no waiting list. On the contrary, China’s regime systematically screens in a database for those healthy people who do not need organ transplantation and could not possibly benefit from such databases.”

Sophia, an engineer whose last name was not given to protect family members who are still living in China, said she spent the first half of her life living in China before moving to Europe and the United States. She started practicing Falun Gong a few years ago, and now advocates for the fair treatment of fellow practitioners in China.

“We have been talking about a horrible event that has been going on in China for the past 18 years,” Sophia said. “I would like to thank everyone on behalf of those in China who don’t have a voice. As an activist, I think of myself as the voice for the voiceless, and everyone sitting this room can also be the voice of the voiceless.”

California State Sen. Joel Anderson, R-El Cajon, said that the imprisonment, torture, execution and subsequent use of Falun Gong organs for transplants is a modern Holocaust.

“I don’t want to be one of those people who says ‘I wish I had, I could have,’” Anderson said. “I want to be one that stood in the breach when it came time to stand up for my fellow man to stand against genocide. I want to be on the record for my grandkids and my kids that I didn’t turn a blind eye to a holocaust.”

Anderson, who’s an anti-trafficking advocate, is currently working to bring California State Senate Joint Resolution 10 to the floor for a vote. If passed, the resolution would call for China to cease “forced organ harvesting of Falun Gong prisoners,” according to a petition Anderson was asking attendees to sign.

Computer science senior Alisdair Broshar said the lecture made her more aware of organ trafficking and has inspired her to learn more.

“At first, I wondered why China was being pinpointed,” she said. “After tonight, I really understand how the fact that the government is involved or the practice of it is so unique in a sense that all organs are being taken, I realize that this is definitely is a unique case.”

A paper from the World Health Organization on international organ trading released in December 2007 discussed a study of transplant tourism and organ-importing countries. Through researching medical articles from Medline/PubMed, the organization sought to determine the scope of the organ trade as a basis for further research.

Researchers found that illegal transplants led to a “heightened frequency of medical complications, including the transmission of HIV and the hepatitis B and C viruses,” according to the paper.

China maintains that organ transplants are not part of a system of persecution against practitioners of Falun Gong, nor are they occurring at the rate described by Matas and Kilgour. In 2007, Chinese officials claimed that transplanted organs only come from donors who have given written consent prior to their death, according to the Chinese Embassy in Canada.

The Chinese Consulate in Los Angeles did not respond to an interview request.