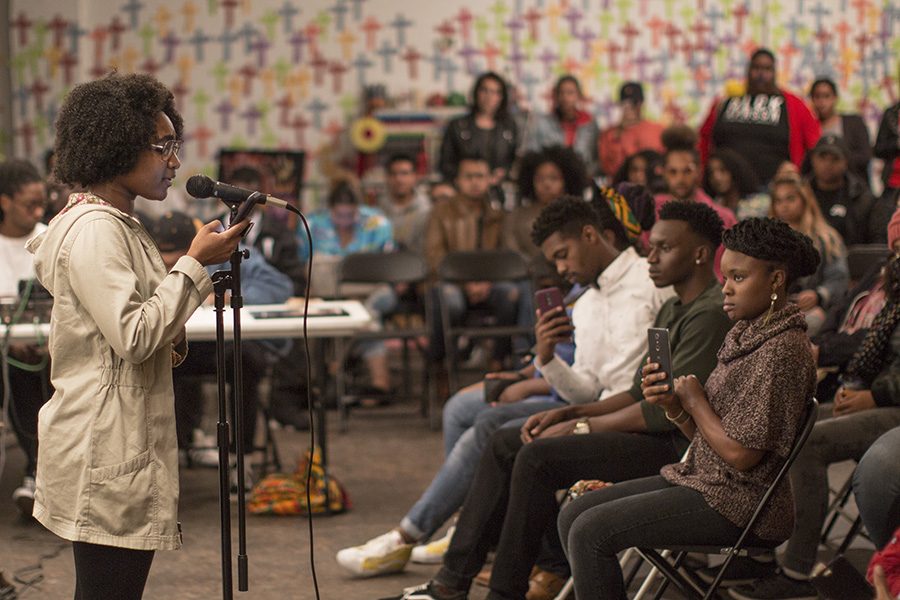 Black Xpression is a space where individuals of all backgrounds perform a piece of any kind in an open mic setting.

Each performer has five minutes per piece and if someone with the microphone says “if you feel it,” the audience responds, “express it.”

While the audience is welcome to participate in performances by clapping, snapping and responding, no negative commentary is tolerated within the space.

Williams is the founder of Black Xpression.

“When people hear ‘black,’ they think African-American off the bat, but ‘black’ I really (think) is anybody who has ever felt like their voice wasn’t heard, or their vision wasn’t accepted or their lifestyle wasn’t seen as the norm,” Williams said. “We try to fill that need of what do people want to talk about, what do people want to discuss and what groups of people aren’t being heard?”

“(Black Xpression) is like our voice of empowerment because we as the black community have been shushed for so long and we’re trying to find opportunities to speak out and to make our issues known to people,” Carson said.

Black Xpression was created about a year and a half ago when Williams and a group of performing students put together an event at the restaurant Caribbean Pleasures.

From Caribbean Pleasures, Black Xpression moved its creative space to a church on Logan Ave.

The group then moved across the street to its present day location when the church relocated elsewhere.

“Here you see a very diverse group of people and I feel like that’s because we’re just accepting of so many different cultures and experiences that people have, (so) people feel open to come here and share that with everybody,” Williams said.

Carson performed “Self Reflection,” a blend of spoken word poetry and song, at the event.

“Self Reflection is just me breaking down everything that I’ve gone through and just opening up my heart and being open-minded to situations and not being so self-conscious,” Carson said. “There’s a lot of people out there who have that same feeling.”

The types of performances featured at Black Xpression are not restricted to any single category. This includes singing, spoken word poetry, dancing, playing beats and freestyle rapping.

Black Xpression presented some skits during their Nov. 3 performance to educate the audience on proper ways to handle situations regarding mental health in honor of mental awareness month.

“The fact that we talk about literally everything in Black Xpression is healing, (and so is) listening to people and knowing that someone else is going through the same thing that you are going through,” Carson said.

Black Xpression does not fear discussion of real life issues and uncomfortable topics.

The organization’s drive stems from its willingness to be open and raw.

The performances cover topics such as unrequited love, environmental awareness, experiences faced by African-Americans in classrooms, rape culture and how it feels to be asked, “what are you?”

Black Xpression meets at 8 p.m. every Friday at La Bodega Gallery to address and normalize the discussion of important issues.