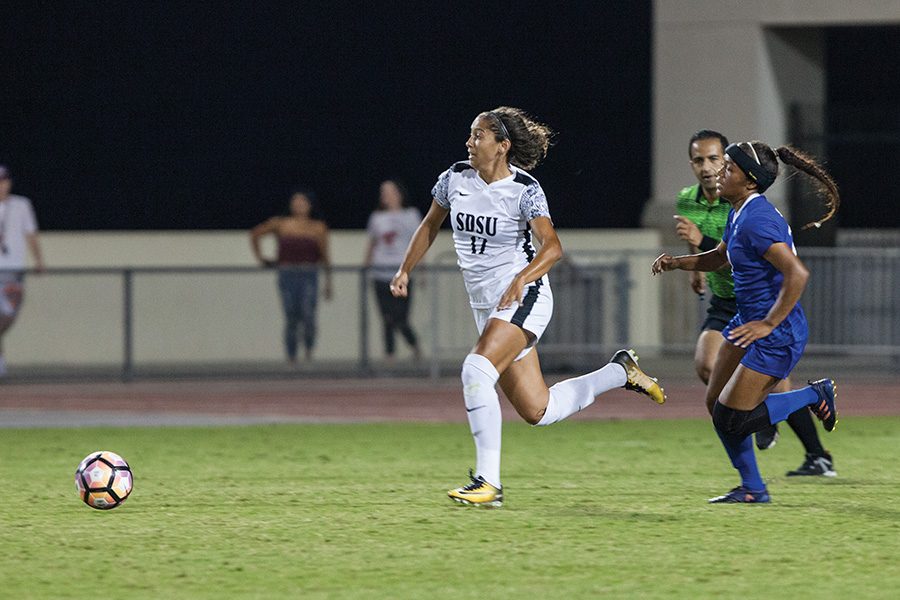 After two years of heartbreak, the six San Diego State women’s soccer seniors are going out on top of the Mountain West Conference.

“I couldn’t stop smiling the entire night,” senior forward Aaliyah Utush said. “My intention was to score and to not come into the game wanting to perform a hat trick, it just happened. I’m really proud of our team.”

The Aztecs, led by Utush’s hat trick, defeated the University of New Mexico, 3-0, in Las Vegas, to win their first Mountain West title since 2014.

The victory gave the Aztecs (12-7-2) a spot in the NCAA Tournament for the first time since 2014, and the team will open the tournament against No. 2 seed UCLA on Friday.

SDSU had lost in penalty kicks in each of the last two MW championship games, both in front of its home fans at the SDSU Sports Deck.

“Each championship is different,” Friesen said. “I believe we were the best team at the tournament. It was a big step in our progress to win the game and to get the stress off of us.”

The Aztecs and Lobos both struggled to score in a windy first period, going goalless into halftime after a combined 14 shots.

Friesen said the heavy wind played a part in the opening half struggles.

“We chose to go in the wind, and New Mexico’s foot throws and long passes were definitely against us,” Friesen said. “We didn’t play the way we wanted to play, we created many chances and couldn’t execute.”

Friesen said his halftime talk was a reminder for his players to stick to the gameplan.

“The halftime talk was about making plays and getting the ball on the ground,” Friesen said. “We need to play the way we want to play and to do what we’ve been doing all year, win.”

The first goal of the game came when Utush rushed down the field and shot from the left post past New Mexico sophomore goalkeeper Emily Johnson in the 57th minute.

“Coming out of the the first half, we now have the wind against us,” Utush said. “The wind died down and after scoring the first goal, it took the pressure off us and put more pressure on New Mexico.”

Nearly 20 minutes after the first goal, Utush scored her second goal off a through ball from senior defender Hailey Balma.

Utush went one-on-one with New Mexico redshirt senior defender Emily Chavez, gaining control and sending a laser into the net to give the Aztecs a 2-0 lead.

“At that point, I felt that the game was entirely ours,” Utush said. “I was more in awe than any other feeling.”

Utush added one more goal, slipping between several UNM defenders and sending a shot past Johnson’s hands to make the score 3-0.

It was Utush’s ninth goal of the season.

This will be Utush’s second time competing in the NCAA tournament, and the first since her freshman year.

Friesen said the Aztecs are going into the competition strong and confident.

“This week we will see where we’re going and who we’re playing,” Friesen said. “We won’t just show up, but we’re going to win.”