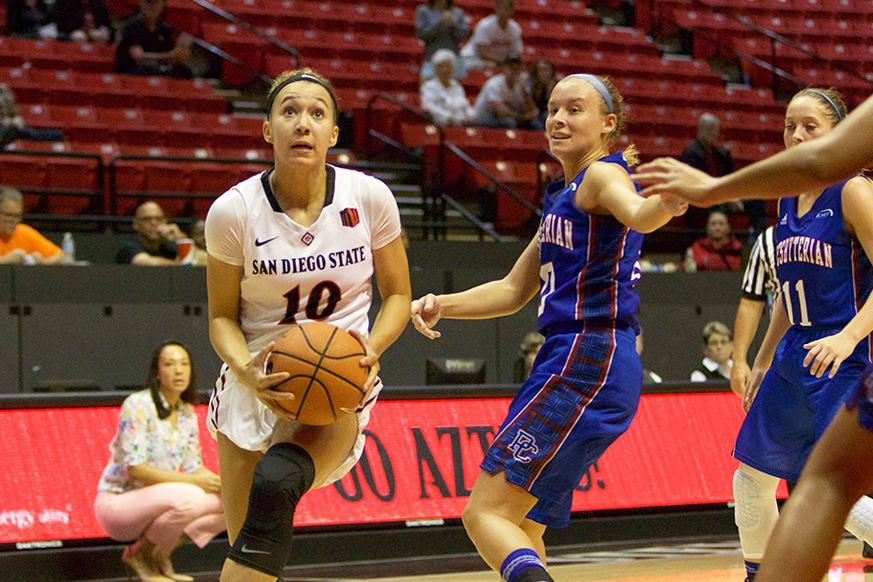 Then-freshman guard Najé Murray drives to the basket for two of her 14 points during SDSU's 77-50 win over Presbyterian College.

SDSU never trailed, and was only tied for the first 12 seconds of the contest until a three pointer by senior guard Myckynzie Fort put the Scarlet and Black up for good.

Fort led the Aztecs with 16 points and seven rebounds.

After the Blue Hose pushed the game to 48-36 in the middle of the third quarter, the Aztecs went on a 23-4 run spanning the third and fourth quarters.

Murray’s 14 points led all reserves, who accounted for more than half of SDSU’s scoring output, outpacing the Presbyterian bench, 39-5.

“They don’t have any film on us freshmen,” Murray said, “so they don’t know what we can do yet, so they just kind of leave me open.”

Head coach Stacie Terry said the team’s depth is a factor that sets this season’s team apart from those in the past.

“I think the difference tonight was our bench,” Terry said. “The biggest thing was out depth, when you can get 40 points off the bench that’s gonna be a good thing. The bright spot about all that is everyone coming off the bench will be here next year.”

Murray was one of five freshmen, and eight underclassmen, to play for SDSU.

All eight came off the bench.

Murray’s three point outburst was just a microcosm of a dominant effort from behind the arc for SDSU. The Aztecs shot 8-13 in the first half to open up a 42-27 halftime lead, and went 12-25 for the game from three.

Senior forward Lexy Thorderson led the charge with four threes on seven attempts – her only shots in the contest – scoring 12 points.

The Aztecs held the Presbyterian long ball in check – the Blue Hose shot only 4-31 from three, with three of the makes coming in the second quarter.

Senior Blue Hose guard Courtney Storey led all scores with 22 points on 10-17 shooting. Storey played all 40 minutes for Presbyterian and was one of only two Presbyterian players to score in double figures.

The Aztecs bullied the Blue Hose on the glass, outrebounding them 45-26.

“It did surprise me, but it was a pleasant surprise,” Terry said. “We run for every offensive rebound we give up so they’ll be happy to know that it was only six… We have struggled really bad in this area these past couple of years so that has been a focus.”