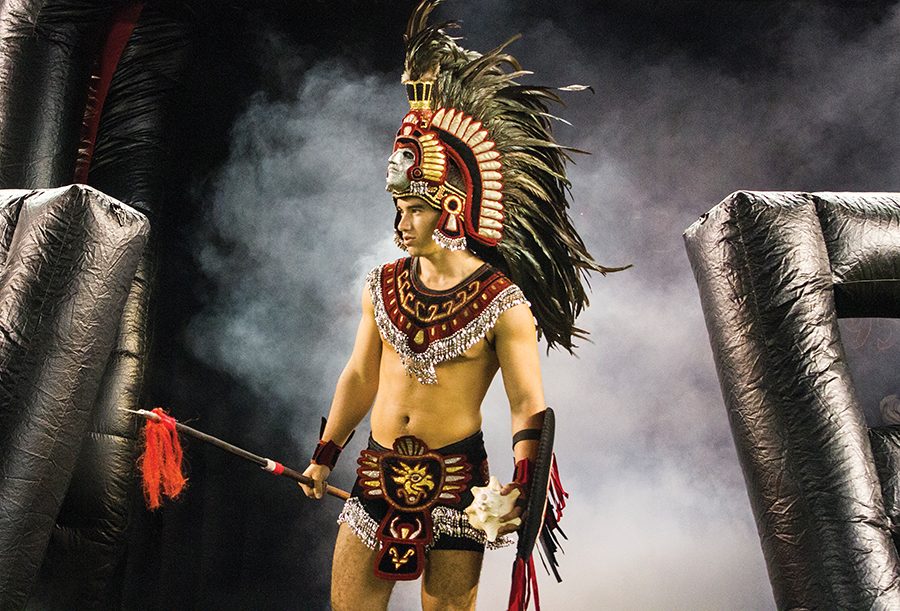 The Aztec Warrior mascot – now to be called a "spirit leader" – at a football game in fall 2017.

Following a resolution to retire the human representation and use of weapons by the Aztec Warrior mascot passed by the University Senate, students and alumni shared their reactions to the controversial topic.

“I think the idea is, when something is around for such a long time, we don’t want to change it or have to question something that we’re kind of attached to,” theater sophomore Mario Vega said.

Vega said the first time he heard San Diego State was trying to change the mascot last semester, he had serious doubts about altering such a long-standing figure. He said his perspective has since changed, since he’s done more research on the topic.

“The more research I’ve done and the more I’ve educated myself on the topic of the mascot and how indigenous people are treated, I’ve started to think maybe it should change,” Vega said.

Political science senior Violet Friudenberg, who was pictured on the cover of The Daily Aztec’s Nov. 8 issue holding a sign reading “tradition is no excuse for racism,” said they believe changing the mascot should not be considered an issue in any capacity.

“So much needs to change and I don’t actually think needing to change the name of a sports team or a building is that big of an issue,” Friudenberg said. “If anything, getting rid of the mascot and the moniker is a starting point and it should continue from there.”

The University Senate resolution was only a recommendation to President Roush, and has no power of its own.

Friudenberg said they have little confidence that SDSU President Sally Roush will implement the resolution.

“I really don’t have a ton of faith in the university administration because they’ve shown time and time again that they’re not here for the most at-risk, marginalized, underfunded, and tokenized populations on campus,” Friudenberg said. “They will talk about how diverse their campus is but, once (Native American) students and other students of color talk about any of this stuff, admin is not there to defend them.”

SDSU 2013 alumnus Matthew Clarkson said he gets frustrated when students complain about the mascot, since he feels they do not recognize how good the university is to them.

“You have these students who are essentially reaping the benefits of an education at a prestigious university going around saying things about the mascot,” Clarkson said. “It just seems absolutely absurd to me.

With alumni donating large sums of money to SDSU, their feelings on the mascot are likely to be a heavy consideration by the university president in any decision she makes on the mascot.

Clarkson said he, along with many of his alumni friends, would consider pulling his donation from the university if SDSU were to change the mascot.

“I think I’d think twice about donating to the university because I really don’t agree with that,” Clarkson said.

Clarkson said a decision to change the mascot may also have negative implications for SDSU in the debate over what to do on the current site of the SDCCU Stadium, which SDSU hopes to acquire through a November 2018 ballot initiative. The goal would be to develop an SDSU West campus on the land.

“I think (changing the mascot) would have an impact because that land has an identity since it was past the Charger’s home, but also the Aztec’s home,” Clarkson said. “I think the area has that history.”

Timothy Meyers Sr., father of an SDSU graduate and co-admin of the “SDSU Aztec Football Fan Club” on Facebook, said he thinks the answer to this debate is not binary, but somewhere in the middle.

“I think when you see the reaction, especially on social media, people perceive it as a binary thing where either we’re going to have (the mascot) or we’re not going to have it,” Meyers said. “I think elements of both sides of the argument see it that way. Neither one is right.”

Meyers said he doesn’t find the Aztec mascot problematic because the Aztecs no longer exist as a civilization. However, he still said he thinks it should be assessed for appropriateness.

Theater sophomore John Michel also criticized the conversation surrounding the mascot resolution, and said supporters of changing the mascot were too reliant on emotional arguments.

“Last semester, a lot of them ended up breaking out into tears or relying on pathos-like appeals,” Michel said. “I think everyone’s just relying on emotions and hysteria rather than relying on the objective, logical point of view.”

Michel said supporters of changing the mascot should not be relying on the argument that non-Native Americans could not understand the offensive nature of the mascot, since it is not their culture.

“The problem is, you’re not going to convince anybody by saying ‘you don’t understand,’” Michel said. “I’m a self-identified progressive, but I personally think this is ridiculous.”

Many opponents and supporters alike said they would endorse greater education about Aztec culture at SDSU.

“My solution is we should offer a mandatory unit of Mesoamerican culture, which is what the Aztecs were a part of, so you would be educating everybody on the Aztecs and who they were and what they were about,” Michel said. “I think that’s fair for a school that uses a Mesoamerican mascot.”

Friudenberg said greater education would be an essential step to moving away from the Aztec Warrior as the SDSU mascot.

“I think there needs to be more of a concerted effort by the university to tell people about this history and how we got here and how they’re going to fix that,” Friudenberg said.