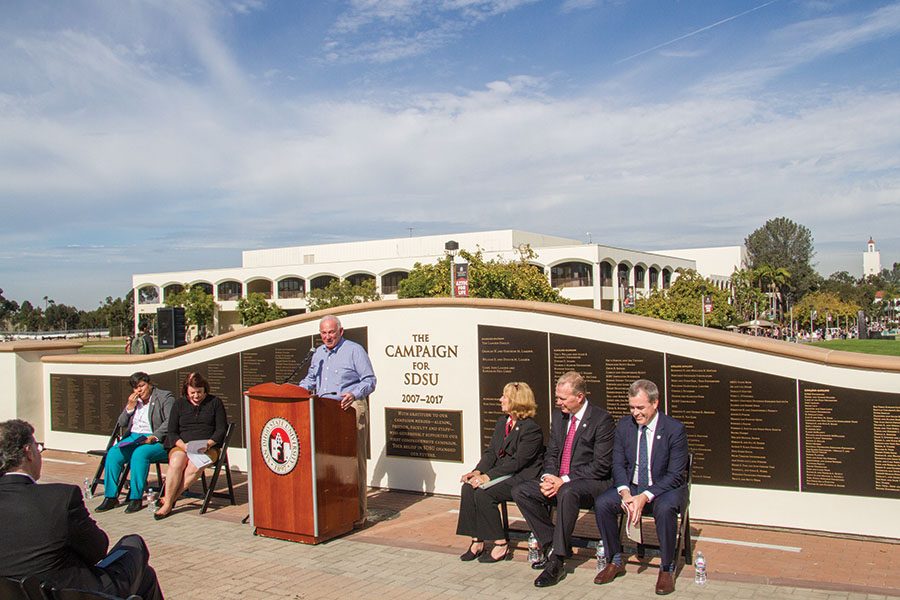 Local officials — many of them San Diego State graduates – were on campus Thursday to take part in the announcement of a new economic impact report that shows SDSU generates more than $5 billion in economic activity.

“Since 1897, the school has grown from a small teachers’ college, sharing space with a downtown dentist office to a leading public university that now enrolls over 35,000 students, offers 91 bachelor’s degrees, 78 master’s degrees and 22 doctoral degrees,” Roush said. “San Diego State University has grown up with the region. The fortunes of SDSU and San Diego have been inextricably linked for 12 decades.”

In fiscal year 2016-17, Roush said for every dollar of state investment — 21 percent of SDSU’s budget — the university returns $11 to the economy, a number that rises to $35 when alumni are considered.

University expenditures contribute over $500 million in labor income and over $1 billion in labor activity in San Diego and Imperial counties, the report said.

“I think we exhibit an impressive return on investment,” she said.

Faulconer called the university a “critical economic engine” for the region.

“(The report) I think talks about what we already know – how critically important and vibrant San Diego State is, not just from our intellectual capital but certainly from an economic standpoint,” Faulconer said.

University graduates can expect to earn $1 million more in their lifetimes than workers without a college degree, according to the economic impact report. And many SDSU alumni — over 60 percent — stay in the San Diego area after they graduate, contributing this money to the local economy.

“As an SDSU graduate and alum, I know that there are few places in San Diego that you can go without running into a fellow Aztec,” Faulconer said. “We’re everywhere, and that’s a very, very good thing.”

Atkins attributed the San Diego area’s success in the high-tech and life science industries to SDSU and other universities in the area.

“Thanks to the pools of talent and the brainpower that our universities produce, we can attract a critical mass of businesses that create thriving, innovative and well-paid industries,” she said. “And those industries power our regional economy and raise the quality of life for all of our residents.”

Sanders said he sees the contributions SDSU makes to the local economy every day in his capacity at the San Diego Regional Chamber of Commerce.

“Because San Diego State focuses on the critical needs of our region, industries that require a high tech, globally-prepared workforce hire SDSU graduates, (alumni) stay in San Diego and continue to contribute to the economic vitality of our region.”