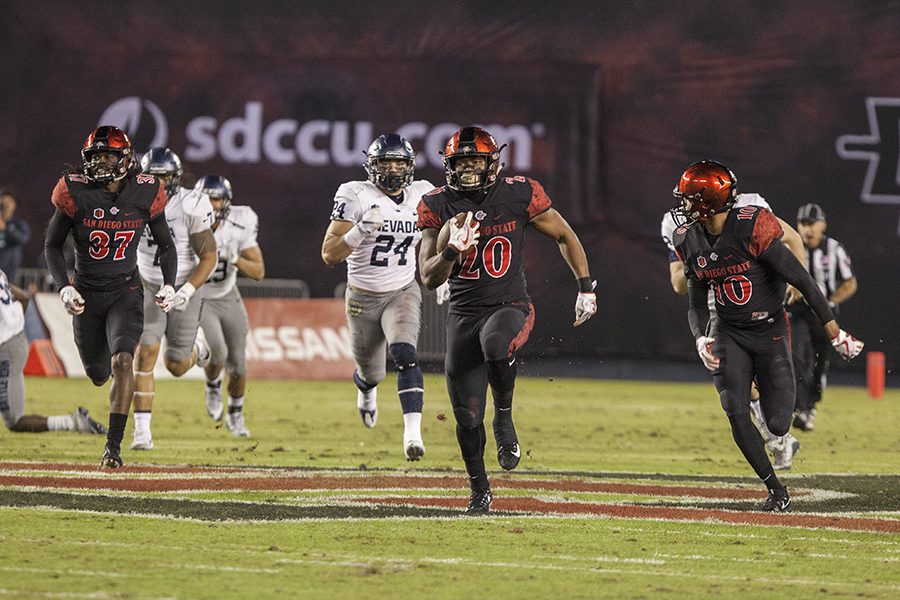 Rashaad Penny returns a first quarter punt 70-yards for a touchdown, during the Aztecs 42-23 victory over Nevada on Nov. 18 at SDCCU Stadium.

By the time San Diego State football took the field against the University of Nevada, Reno, its hopes of competing in a third straight Mountain West Conference championship game were gone.

Apparently, no one informed senior running back Rashaad Penny.

Penny returned both a kickoff and a punt for a touchdown, and ran for 222 yards with two scores to reclaim the top spot in the FBS in rush yardage with 1,824.

His total of 429 all-purpose yards were the most by any player in the FBS this season, and the most in program history, eclipsing a 422-yard performance by legendary SDSU running back Marshall Faulk in 1991.

“When you do things like this it just feels surreal,” Penny said. “It’s a blessing but then again it’s these guys, can’t do anything without (redshirt junior quarterback Christian Chapman) handing me the ball or the wedge guys blocking for me or the offensive line. I thank God. I think they should be more excited than me.”

It was the Aztecs first home game since a 27-3 loss to Fresno State on Oct. 21 put their championship hopes in peril, and Fresno’s 13-7 victory over University of Wyoming earlier in the day ended any chance of a third consecutive MWC championship.

“Congratulations to (Fresno State). I mean, they deserve it,” SDSU head coach Rocky Long said. “They won the games they needed to do and they beat us.”

The Aztecs withstood a 414-yard passing performance from Nevada junior quarterback Ty Gangi, who hooked up with senior wide receiver Brendan O’Leary-Orange eleven times in the game for 214 yards and three touchdowns.

Nevada had 448 yards of total offense in the game, with only 34 coming on the ground, and 275 of Gangi’s 414 passing yards coming in the first half.

Penny accounted for both of the Aztecs first quarter touchdowns.

The first came on a trick play, after Penny took a toss and looked to throw the ball, but with no receiver open, cut back to the right side of the field and sprinted around defenders for a 23-yard touchdown run.

Later in the quarter, Penny lined up to return his first career punt, which he promptly took back 70 yards to give the Aztecs a 14-10 lead.

Penny’s third touchdown of the night came after he returned a fourth-quarter kickoff 100 yards for his seventh career kickoff return touchdown, tying the all-time FBS record.

The return gave SDSU a 35-23 lead, and appeared to deflate a Wolf Pack team looking to make a comeback.

Penny completed his offensive outburst with a 67-yard touchdown rush with 8:31 to play, which was the game’s final score, and his last carry of the night.

The Aztecs finished with 494 yards on offense, with 289 yards coming on the ground and 205 coming courtesy of Chapman, who completed 15 of 23 passes and had one touchdown in the game.

Chapman said that he was proud to be a part of Penny’s historic performance.

“It’s amazing to be a part of. His name is going to be etched in history,” Chapman said. “I feel everybody on this team feels they were a part of it. We take pride in it.”

SDSU got additional help on offense from senior wide receiver Mikah Holder, who had five catches for 85 yards, and who connected with Chapman on a five-yard touchdown pass with 39 seconds remaining in the first half to give SDSU a 21-17 halftime lead.

Nevada struck first in the game with a 23-yard field goal by sophomore kicker Spencer Pettit on its opening drive.

The field goal was set up by a 52-yard pass and catch from Gangi to O’leary-Orange, which got the Wolf Pack to the Aztecs seven yard line.

A fumble by Holder at 6:02 in the first quarter set up Nevada at the Aztecs’ 48-yard line, and the Wolf Pack took advantage on their first play with a 48-yard touchdown pass from Gangi to O’Leary-Orange for a 10-0 lead.

The Aztecs cut the score to 10-7 on Penny’s 23-yard touchdown run, and took a 14-10 lead with 2:05 remaining in the first quarter after his 70-yard punt return touchdown.

The Wolf Pack were driving deep into Aztecs territory in the second quarter when a backwards pass derailed their drive and gave the ball back to SDSU at the 24-yard line with 13:42 to play in the half. The fumble was recovered by senior defensive end Dakota Turner, the first of his career.

Nevada later retook the lead on a nine-yard touchdown pass from Gangi to O’leary-Orange, to make the score 17-14 with 9:07 to play in the first half. The Wolf Pack got into scoring position after senior wide receiver Wyaatt Demps took a pass from Gangi 82 yards to inside the Aztecs’ 10-yard line.

SDSU increased its lead to 28-17 on a one-yard touchdown run by sophomore running back Juwan Washington, who ran for 51 yards on 12 carries.

The eight-play drive spanned 70 yards and included a 31-yard pass to Holder, and saw a would-be 70-yard touchdown rush by Penny get negated by a holding penalty.

Nevada got as close as 28-23 with 13:43 to play in the game, after a two-yard touchdown pass on fourth down from Gangi to O’Leary-Orange, who also had a 53-yard catch on the drive. The score completed a 12-play, 89-yard drive, and the Wolf Pack failed to convert their subsequent two-point conversion attempt, which would have brought them to within a field goal.