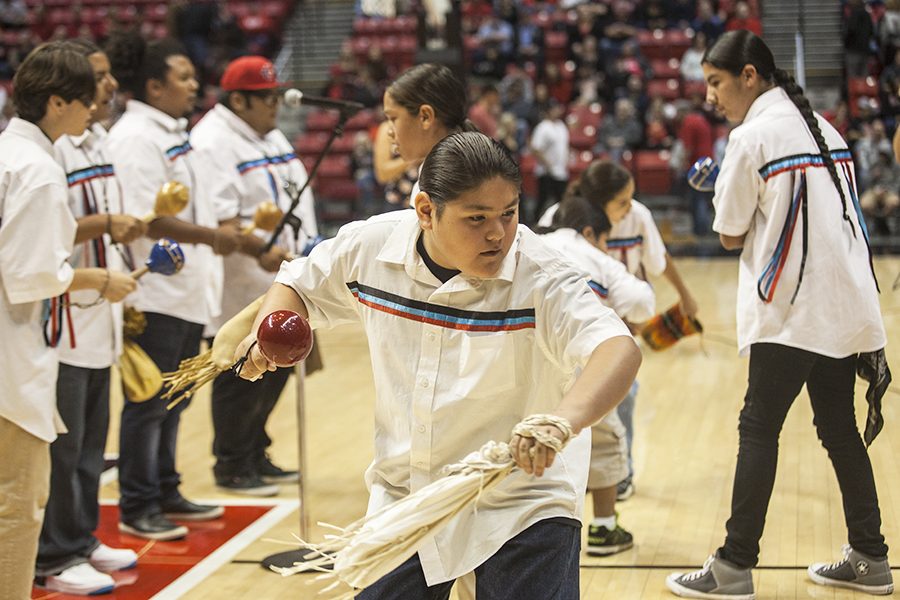 Native American Heritage Month was honored at the Nov. 18 San Diego State men’s basketball game against McNeese State University, raising questions among some attendees about whether these types of recognition occur frequently enough.

This came after the University Senate’s passage of a non-binding resolution to retire the use of the Aztec Warrior mascot amid concerns that it is disrespectful to students of Native American background.

While opponents to the use of the Aztec Warrior argue the mascot is inherently racist and should be retired, some supporters say its use is appropriate as long as the university takes measures to raise awareness of indigenous cultures.

SDSU 1987 alumnus Patrick Calvet said the university should consider other ways they could represent the Aztec name on campus.

“Maybe they should show some more cultural things around campus,” Patrick Calvet said. “I know that the Spanish-style architecture is all around but I’m not sure how much of the Native American culture is represented on the campus itself.”

David Duro Jr., secretary of the American Indian Veteran Association of Southern California, said he thinks SDSU should do more to represent indigenous communities. But Duro also said he has an issue with what he perceives as the school’s motives for representing these communities.

“Sometimes (SDSU) turns the event into just a PR event even though the tribes, they give millions of dollars to the school, my tribe included,” Duro said.

The American Indian Veterans Association of Southern California, an organization whose mission is to give late Native American veterans their final military honors, was invited to do performances before and during the halftime show of the basketball game. Their performances included an honor guard and dance performance.

“We were called here in recognition of Native American Heritage Month,” Duro said. “Even though we are veterans as well, we still support our communities.”

Terrie Lewis, a woman in attendance at the game on Nov. 17 who said she has Native American heritage, said she supports an increase in cultural events like what she saw at the basketball game.

“It’s just like they do at Viejas Casino,” Lewis said. “They do outside dancing to help people more to understand (the culture). The more you know about it, the better.”

Lewis said despite the controversy, she believes the use of the Aztec mascot is a great way to greater represent indigenous cultures.

“It’s tradition,” Lewis said. “I love the tradition. And, the fact that it’s Aztec? Why not have an Aztec person? The mascot is great the way it is and, for them to keep bringing it up, I think that’s disrespectful to me.”

SDSU 2005 alumna Darla Vargas said she thinks the mascot is an important figure for students.

“I think that it’s more of a symbol for the students and not necessarily just cultural,” Vargas said. “I guess, looking at it as just a mascot, I don’t find it really offensive. I can see both sides of it.”

Vargas said she believes the voices of Native American students need to be listened to the most in the debate about the use of the Aztec Warrior mascot.

“I think we should talk more to Native American people and see how they feel about it,” Vargas said. “I feel like there’s a lot of controversy between people discussing it but those people are not Native American so how can we value their opinion if they’re not being directly affected by it?”

The university always has room to advance in being more respectful to Native American students and other communities, Vargas said.

“Obviously, if we have a mascot that could be oppressing the people, I don’t think they’re doing enough,” Vargas said.