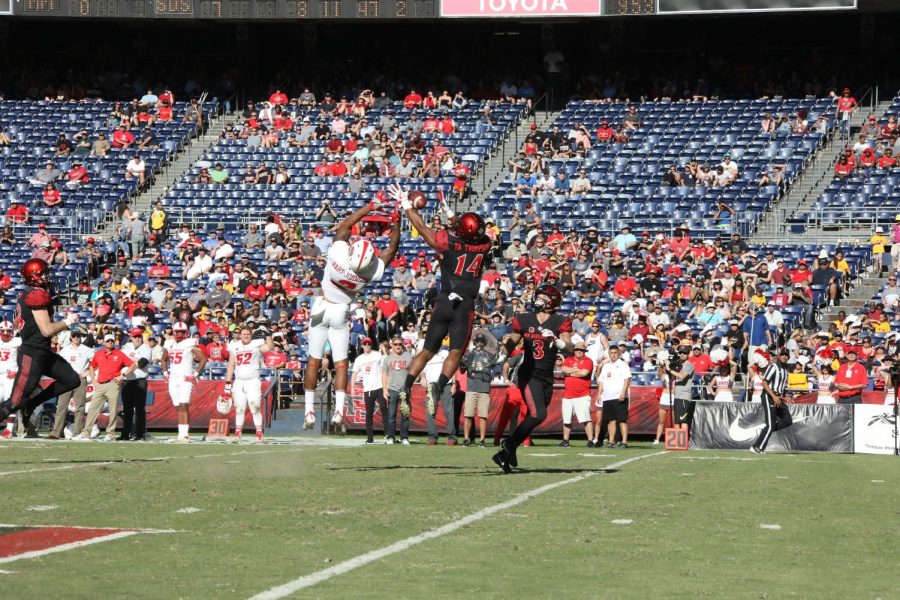 Ground and pound is the name of the game for San Diego State football.

Anchored by an offensive line with only one returning starter – who missed significant time with injuries this season – the Aztecs put together a season full of dominant running performances.

Senior running back Rashaad Penny rushed for 2,027 yards and 19 touchdowns, marking the first time in FBS history that a team had a 2,000-yard rusher in two consecutive seasons.

Penny by and far led the way for the Aztecs on offense this season.

The Norwalk native finished the 2017 season with four consecutive 200-yard games and shattered the program record of all-purpose yards in a season. With 2698 yards, he already has 298 yards more than Donnel Pumphrey’s mark from last season and has 544 yards more than any other FBS player.

Sophomore tight end Kahale Warring made a name for himself, finishing third on the team in receiving yards (248) and led all players with three touchdown receptions. Warring only played in four games during his freshman year before a foot injury sidelined him for the final eight games of the season. His 18 catches tied him with Penny for second most on the team, and he looks poised to take over from senior David Wells as the Aztecs top tight end going into next season.

Senior wide receiver Mikah Holder once again led the Aztecs in receptions (43) and yards (602) while playing the role of Chapman’s favorite target this season. Holder consistently caught passes to extend drives, often fearlessly cutting across the middle of the field and absorbing big hits.

Penny led the Mountain West Conference with two kickoff return touchdowns this season and tied the FBS record with seven for his career. Penny also returned a punt for a touchdown on his first ever attempt against Nevada.

The Aztecs finished with the top overall defense in the MW for the fourth straight season, allowing 303 yards per game.

Bolstered by the top run defense in the conference, the defense made critical stops at key times to keep the Aztecs in games.

The defense held opponents to 10 points or less on four occasions this season, holding Hawaii and San Jose State to seven points each, and New Mexico and the University of Nevada, Las Vegas to 10 points.

SDSU prides itself on creating turnovers on defense and recorded at least one takeaway in seven games this season.

The Aztecs did go through a four-game stretch where they went without recording a turnover but followed that up with five takeaways in the final three games.

After losing seven starters, including three that are now playing in the NFL, the team saw several young stars emerge in the defensive backfield.

The most valuable on defense this season was senior cornerback Kam Kelly. While the defense struggled at times with giving up big pass plays, Kelly was a consistent force in the Aztecs secondary. He finished third on the team in tackles with 50 and had three interceptions, including one which sealed the victory over Stanford. Kelly also had two sacks and a forced fumble against Stanford, and his performance earned him the Bronko Nagurski National Player of the Week.

St. Augustine High product Tariq Thompson was a surprise breakout star in the Aztecs secondary this season. The true freshman led the team with five interceptions, including one he returned for a touchdown in SDSU’s victory over NIU. Thompson also had a game-sealing interception in the game, immediately making himself a household name on the Aztecs defense.

Junior safety Parker Baldwin flew all over the field this season, finishing second on the team in tackles with 66. Baldwin followed up a 14 tackle performance against Air Force with 11 tackles against Northern Illinois University. Baldwin, who has matched his tackle total from last season, will look to set his new career high during the Aztecs bowl game.

Performances of the year

On Nov. 18 against Nevada, Penny had the greatest statistical performance in San Diego State history. Penny finished the game with 429 all-purpose yards while scoring four total touchdowns to lead the Aztecs to a 42-34 victory.

The 429 yards were the ninth most ever recorded in the FBS, and were the most in SDSU history, eclipsing the record of 422 yards set in 1991 by Marshall Faulk.

Penny returned both a kickoff and a punt for a touchdown, with his punt return coming on his first career attempt.

Penny paced the Aztecs on the ground with 222 rushing yards and two touchdowns, and he would have had 70 more yards if not for a holding call which negated a third-quarter touchdown run.

Senior cornerback Kameron Kelly was a defensive force in the Aztecs 20-17 victory over Stanford on Aug. 16. Kelly had two sacks in the game, along with a forced fumble, interception, and six total tackles. Kelly’s interception came during the fourth quarter and ended the Cardinal comeback hopes. Kelly earned the Bronko Nagurski National Player of the Week for his performance, becoming only the second player from SDSU to ever be chosen for the award.

Game of the year

Before the season began all eyes were on the Aztecs game against Stanford University. The Sept. 16 matchup did not disappoint, with SDSU pulling out a 20-17 victory following a 22-minute stadium power outage.

It was a defining win for the program and one that propelled the Aztecs into the AP and Amway Coaches Top 25.

The matchup featured the top two running backs in the FBS in Penny and senior back Bryce Love.

Love rushed for 184 yards on 13 carries, adding two 50-plus yard touchdown runs. Penny was bottled up by the big Stanford defensive front for most of the contest, but his 31 carries brought 175 yards and wore down the Cardinal defense.

Love opened the fourth quarter with a 53-yard touchdown to give Stanford a 17-13 lead.

SDSU squandered a scoring opportunity after a sack pushed them out of field goal range, but got the ball back with over four minutes left.

Then darkness filled the stadium.

After the delay the Aztecs drove 42 yards down the field, finishing off their game-winning drive with an eight-yard touchdown pass from Chapman to senior tight end David Wells.

Delirium took over the stadium as the fans rushed the field. Wells said after the game that it was, “stuff you dream of as a kid.”