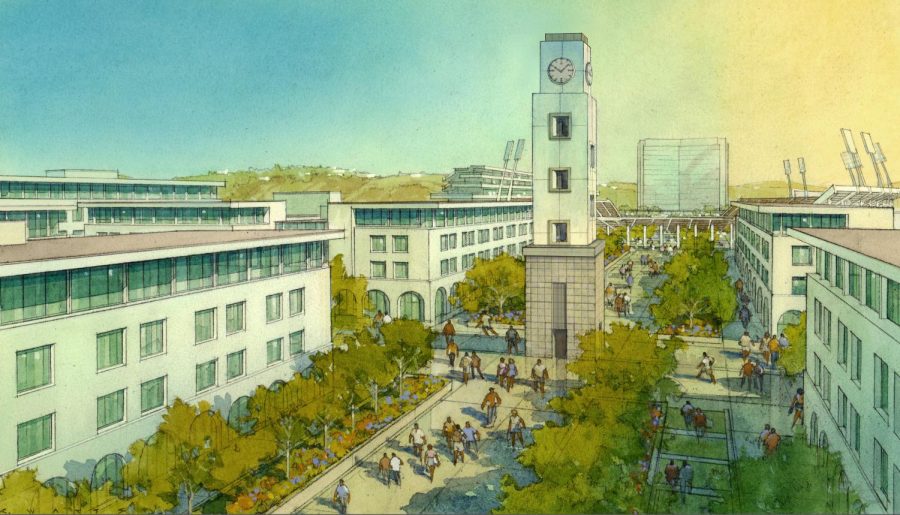 A newly-released rendering of plans for an expansion of SDSU's campus onto the current SDCCU Stadium site in Mission Valley. Photo courtesy of SDSU NewsCenter.

The university revealed its vision for the SDCCU Stadium site in a press briefing Wednesday at the Parma Payne Goodall Alumni Center. The 166-acre project would include upper division and graduate student housing, a new multipurpose athletics stadium, retail shops, commercial office buildings and a hotel.

Community parks and recreational fields would shape the landscape surrounding the site, taking an what the university calls an “open space” design.

“This is a once-in-a-lifetime opportunity to expand the university in a location that is both close to the main campus and large enough to accommodate the university’s growth needs,” Roush said in a statement released by the university. “It is a plan with the heart and spirit of a modern university campus that will serve higher education and the community’s aspirations for the site.”

The plans for the site were designed by architectural firm Carrier Johnson + CULTURE, and development is being headed by JMI Realty.

“SDSU made it clear to us from the start that a well-executed campus plan on the site must be rooted in environmentally sensitive design that enhances and highlights the San Diego River, and creates plentiful open space for the entire community,” Gordon R. Carrier, design principal at Carrier Johnson, also said in the statement. “You can see that thoughtful approach reflected in the amenities, from recreation fields to four miles of trails, and a 50-acre community river park.”

Roush said the total cost for the project is estimated to be about $3 billion.

“It’s got a really big-sounding number, but almost all of that would come from private developers that we could contract with to build the housing, the retail and the office buildings,” she said.

The costs for the stadium itself is $250 million, which Roush said would be financed by revenue generated from the stadium, signage and corporate sponsorship.

University officials said no taxpayer money will be used to fund any part of the project.

Friends of SDSU, a group pushing for SDSU’s expansion into Mission Valley, has been collecting signatures for an SDSU West ballot initiative since October.

Fred Pierce, the spokesman for Friends of SDSU’s steering committee, told The Daily Aztec earlier this month that the group is well on its way to collecting 100,000 signatures for the initiative by the end of the year.

The organization needs 71,000 signatures from registered voters in the city of San Diego to be placed on the November 2018 ballot alongside a similar initiative for the competing SoccerCity plan, which would redevelop the SDCCU Stadium site with a Major League Soccer stadium and mixed-use residential and retail spaces.

Faulconer has previously come out in favor of the SoccerCity initiative.

“We had hoped to brief him this morning, before having the press conference but he was unavailable, but we’ll give him a full briefing whenever he wishes,” Roush said. “He’s been a great supporter of San Diego State and I think he’ll be pleased with (SDSU’s) plan.”

The university said it will reach out to the community and other local organizations over the next few months to get feedback on its plans.