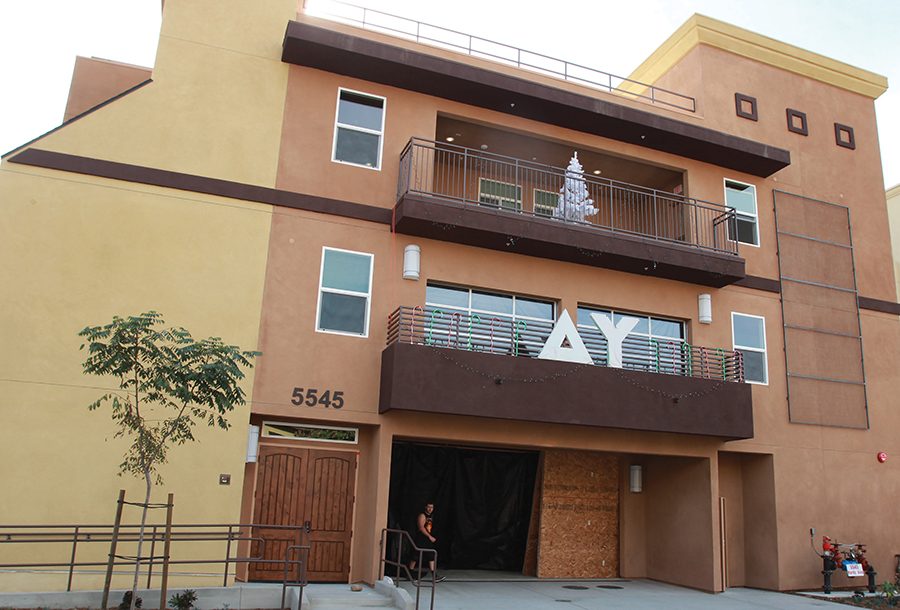 Chapter members held a dedication ceremony Nov. 18 for their brand-new house, located at 5545 Hardy Avenue, on the same site as their old chapter house.

Delta Upsilon’s old house was a 1,200-square-foot family home built in 1951 — a modest residence for a fraternity with about 100 members.

The new home, by contrast, is nearly 10 times larger than the old one, with three floors and 11,000 square feet.

“I believe it’s an important mark in our history and how far we’ve come,” kinesiology major and chapter president Jared Fitzpatrick said.

Fitzpatrick said that with an increase in members in recent years, it had become challenging to hold chapter meetings with all the members in the same room.

Noticing the need for expansion, Delta Upsilon alumnus John Pedicini contacted the fraternity’s Alumni Board of Directors offering to build a new on-campus home for its members.

Most of the funds received for the new house project were from the fraternity’s alumni board of more than 1,000 members, who donated upwards of $250,000 to cover the cost of the project.

The fraternity hopes to be moved into the new house — which has room for about 38 members — by Dec. 15.

Chapter members said they attribute their growth in membership to their genuine approach to getting to know other potential members during their rush process.

“All throughout my new member process (the chapter members) really made me feel like I could do great in the house,” administration junior and chapter vice president Brandon Egger said. “The mutual encouragement is really nice to have.”

This sentiment was echoed by chapter member and economics senior Gavin O’Hara, who says the fraternity stood out from others during his rush process.

“Instantly when I (first) walked in I was sat down, I was greeted, people came and talked to me; and it wasn’t necessarily the same everywhere else,” he said.

Delta Upsilon members also said that they try to be diverse in their recruitment process, adding that’s something that they’re proud of, and continue to strive for.

Chapter member and economics senior Jordan Yudess said he has been with the fraternity since his freshman year and is proud of the growth he has seen.

“I felt at home, and we’re also really diverse,” Yudess said. “ You can be who you want to be.”

While the members are enjoying their new home, they’re also taking precautions after the recent expulsion from campus of another fraternity, Phi Kappa Theta.

“It’s not only a concern to us, (but) also to our alumni, that we keep up this growth and positive reputation on campus,” Fitzpatrick said. “It’d be a shame to lose everything that we’ve worked for.

Fitzpatrick added that they’re working to have more members to attend their chapter meetings, and get them energized to become leaders and entrepreneurs, focusing on the fraternity’s motto, “building better men.”

“I want to be able to come back in 20 or 50 years from now, and come back to the same house and see the group of guys that are maintaining the culture that we’ve instilled,” Fitzpatrick said.