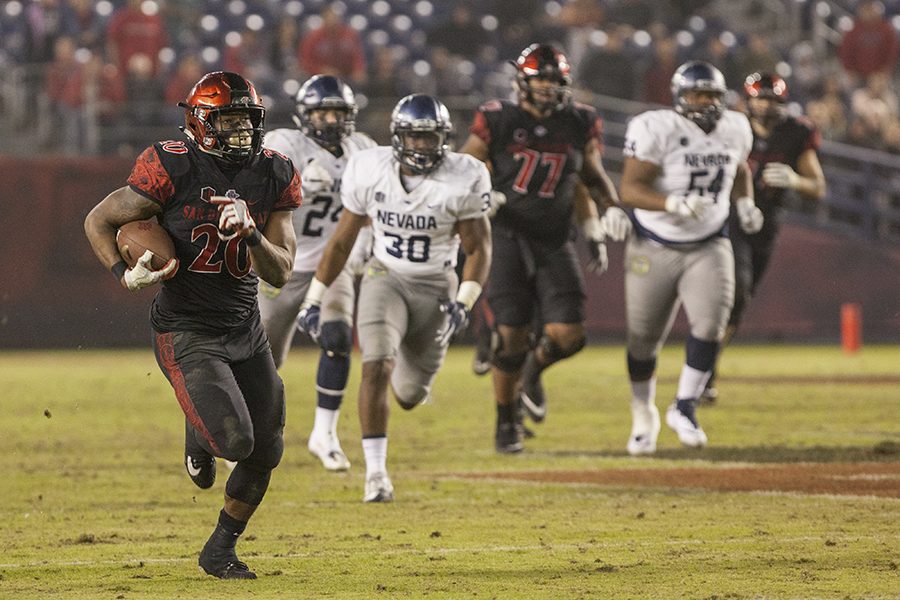 Senior running back Rashaad Penny runs ahead of the Nevada defense during SDSU's 42-23 win over the Wolf Pack on Nov. 18.

A whirlwind season will end in a Texas-sized bowl game as San Diego State football heads to Fort Worth on Dec. 23 to take on Army West Point (9-3) in the 15th annual Lockheed Martin Armed Forces Bowl.

SDSU (10-2) finished the year on a four-game winning streak to reach double-digit victories for a third straight season and will face an Army team that has won seven of its last eight, including a come-from-behind 14-13 victory over the United States Naval Academy on Dec. 9.

The game will be the first for the Aztecs since a 35-10 home victory over New Mexico on Nov. 24, as the team failed to reach the Mountain West Conference championship game on Dec. 2 for the first time in three seasons.

“We are disappointed we weren’t in the (Mountain West) championship game,” Long said.  “We might have maybe had a little bit more pull on where we would have gone.”

Long said he is still excited for the opportunity to play an Army team that will be searching for its first 10-win season since 1996.

The game figures to be a ground battle, as the Aztecs will counter Army’s FBS-best rush offense – 355.83 yards per game –  with senior running back Rashaad Penny, the leading rusher in the nation with 2,027 yards.

Penny needs only 107 yards on the ground to eclipse the school record of 2,133 rushing yards in a season, set just last year by Donnel Pumphrey.

“We know exactly where (Penny is),” Long said. “The number one goal is to win the game and the number two goal is to make sure (Penny) breaks that record.”

The bowl will mark the end of Penny’s career at SDSU, and the senior figures to enter the NFL Draft next year after finishing fifth in Heisman Trophy voting and earning First-Team All-American honors from five different media outlets.

SDSU offensive coordinator Jeff Horton said the afternoon bowl game is one final chance for Penny to put on a show at the collegiate level.

“All the people that were sleeping during the year when we played that don’t realize that Rashaad Penny was the best player in the country – maybe they’ll be awake at 2:30 p.m. on that Saturday,” Horton said.

The Black Knights have attempted only 61 passes this season while running a triple option offense, similar to what SDSU faced earlier this year in its wins over the University of New Mexico and the Air Force Academy on Sep. 23.

“We’re like an air raid team compared to Army,” SDSU offensive coordinator Jeff Horton said. “If it wasn’t on TV, it would be a really short game.”

Army has completed only 19 passes this season, with 13 coming from senior starting quarterback Ahmad Bradshaw.

“Bradshaw is a great player, a 5-foot-11, 205-pound kid runs the ball well and has only thrown the ball 39 times on the entire season,” SDSU defensive coordinator Danny Gonzales said prior to Army’s last game. “Usually when he throws it they are wide open so he doesn’t miss.”

Bradshaw leads the Black Knights in rushing with 1,566 yards, and he threw his 40th pass of the season – a completion to junior running back Calen Holt – in the team’s victory over Navy.

Army has three other rushers with over 500 yards on the ground this season, including junior running backs Darnell Woolfolk (725) and Andy Davidson (546), and sophomore running back Kell Walker (592).

“We’ve got a lot to prepare for,” Gonzales said. “Thank God we have three weeks, which gives you a little bit better chance but doesn’t make it any easier.”

The Aztecs will try to slow down Army’s run game with their conference-best rush defense, which allows only 110.83 yards per game, good for eighth in the FBS.

“(Army) pretty much run an option, so we’ve seen it before and we’re going to do the best we can to stop the run,” senior defensive lineman Sergio Phillips said.

Redshirt junior quarterback Christian Chapman will be under center for his 29th consecutive start for the Aztecs, moving him out of a second-place tie with Billy Blanton in the school’s record books.

“It’s crazy, time flew by, kind of blessed to be able to get that many starts and play that much ball here,” Chapman said. “I’m just excited for the future keep things rolling and just happy to be where I’m at and the success that I’ve had over the last few years.”

Chapman has thrown for 1,848 yards this season with 13 touchdowns and three interceptions, and will be playing on the same field as senior wide receiver Mikah Holder for the last time.

“It’s Mikah’s last game so we’re going to let him go out with a bang hopefully and get him some yards,” Chapman said.

Holder was Chapman’s favorite target this season, finishing with team highs in receptions (43) and total yards (602).

The bowl game will be a Texas homecoming for 13 players and four members of the coaching staff.

Phillips, originally from DeSoto, Texas, said that he is excited for the opportunity to play in front of family back in his home state.

“It’s a blessing to go back to Texas because some of my family has never seen me play but they will be able to this time,” Phillips said.

SDSU is undefeated in two matchups all-time against Army, winning the last game played in 2012, 42-7.