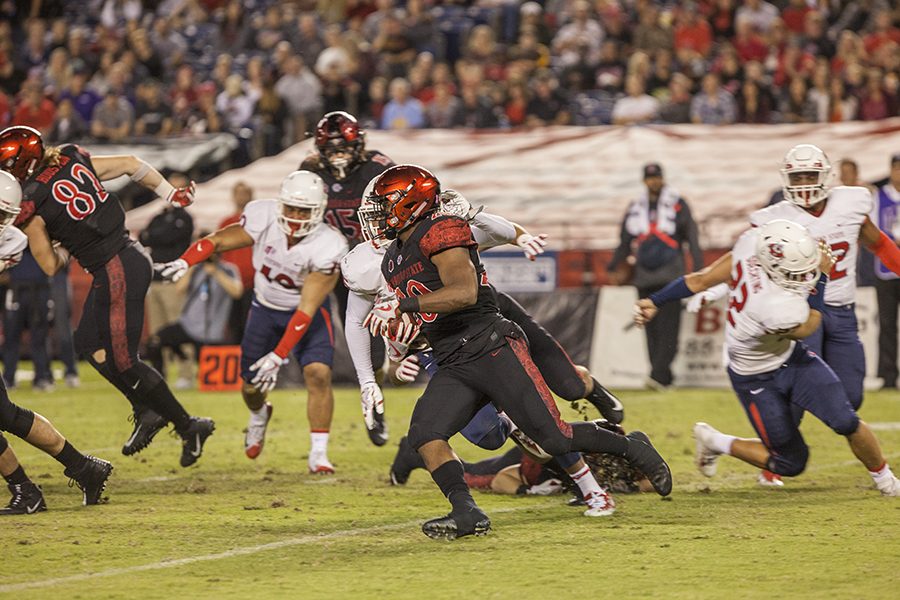 Senior running back Rashaad Penny attempts a run to the left side during SDSU's 27-3 loss to Fresno State.

Senior running back Rashaad Penny made history in the Lockheed Martin Armed Forces Bowl, rushing for a bowl-record 221 yards on a season-low 14 carries with four touchdowns while setting a new San Diego State football record for total yards in a season with 2,248.

Unfortunately for the Aztecs, they needed him to get the ball one more time.

Army West Point scored the final 14 points of the game – including a game-clinching two-point conversion with 12 seconds left – to complete a dramatic come-from-behind 42-35 victory over SDSU in Fort Worth, Texas.

“We had some chances to put the game away just like they did and we didn’t win it,” Aztecs head coach Rocky Long said. “There are no excuses for not winning, but obviously we’re disappointed.”

Facing a 35-28 deficit with under six minutes to play in the game, Army completed a 15-play 72-yard drive with a one-yard touchdown run by junior running back Darnell Woolfolk with 12 seconds to play.

The Black Knights opted for a two-point attempt, which it converted on a sweep to the right by sophomore running back Kell Walker for a 36-35 lead.

SDSU sophomore running back Juwan Washington returned the ensuing kickoff to the Aztecs 40-yard line, but the team’s attempt at a miracle fell short after a lateral by redshirt junior quarterback Christian Chapman was caught by sophomore defensive back Elijah Riley and ran back for an exclamation-point touchdown.

The loss ended a four-game win streak for the Aztecs, along with their hopes for a third consecutive 11 win season, as they finish the year 10-3.

“I never thought I’d be disappointed with 10 wins,” Long said. “But whenever you end the season with a loss, I’m just disappointed about everything.”

The Black Knights (10-3) attempted only three passes in the game (compared to 87 runs for a total of 440 yards), and controlled the clock, finishing with an advantage of 46 minutes on offense to only 14 minutes for the Aztecs.

Army’s longest possession of the game came on its opening drive of the third quarter, when it ran 20 plays and used over 11 minutes of clock, but failed to come away with points after failing to convert on a fake field goal attempt.

The Black Knights converted two fourth-down attempts on the drive with senior quarterback Ahmad Bradshaw, who completed his first pass of the game at 13:18 in the third quarter with a six-yard completion to freshman wide receiver Camden Harrison.

SDSU took advantage when it was their turn with the ball, gaining 280 yards (255 on the ground), on only 31 plays.

Penny said that his record-breaking day on the ground was no consolation for his team losing the game.

“It doesn’t mean anything. You could have 400 rushing yards and lose, that means nothing at the end of the day,” he said.  “All I try to do is try to help this team win and put my team in the best situations. That’s all I play the game of football for, and I love it that way.”

The team’s traded scores for the majority of the game, and Penny gave the Aztecs a 28-21 lead with a 49-yard touchdown run, his third of the game, with 1:49 remaining in the third quarter.

SDSU had a chance to increase it’s lead after Army failed on a trick pass play on its next drive after sophomore wide receiver Kjetil Cline threw an interception to junior defensive lineman Anthony Luke.

Luke returned his first career interception to the Army 14-yard line, but the Aztecs failed to turn the good starting field position into points after senior linebacker Alex Aukerman intercepted Chapman at the 10-yard line.

It was only the fourth interception of the season for Chapman, who finished the game completing six of ten passes for a season-low 25 yards.

Bradshaw tied the game on the ensuing drive at 28-28 with his second rushing touchdown of the game, a 27-yard score with 9:25 to play. The run completed a 10-play 79-yard drive.

Penny then gave the Aztecs a 35-28 lead with his fourth touchdown of the game, bullying his way into the end zone on a four-yard rush with 5:47 left in the game.

Penny had runs of 18 and 20 yards on the drive, eclipsing the 200-yard mark on the ground for the fifth straight game – tying an NCAA record – on the latter, only his 10th carry.

The Aztecs took advantage of good starting field position to start the drive after a 15-yard unnecessary roughness penalty was added onto Penny’s kickoff return near midfield to give the team the ball on Army’s 44-yard line.

It was a back-and-forth first half, and Army appeared poised to go into halftime with the lead before Washington returned a kickoff 78 yards to tie the game at 21-21 going into halftime.

The return followed a four-yard touchdown run by junior running back Andy Davidson which gave Army a 21-14 lead with 18 seconds left in the half. The run completed a 13-play 53-yard drive which took nearly six minutes off the clock.

Penny got the scoring started at 13:36 in the first quarter with an 82-yard touchdown rush on his first carry of the game to give the Aztecs a 7-0 lead.

Army responded with a 19-yard touchdown rush from Bradshaw, completing an eight-play 70-yard drive to tie the game at 7-7 with 2:13 left in the first quarter.

Army did not throw a pass in the first half, instead of rushing the ball 43 times for a total of 230 yards.

SDSU retook the lead on a 32-yard touchdown run by Penny, who sprinted down the left sideline untouched for his second score of the game and a 14-7 lead.

The touchdown gave Penny 116 rushing yards for the game and broke the school record of 2,133 rushing yards in a season, set just last year by Donnel Pumphrey.

SDSU lost senior guard Antonio Rosales on the drive after he was disqualified for a late hit on an Army defender at the end of a 27-yard Washington run.

Army re-tied the game at 14-14 following a 12-play 74-yard drive which took up nearly seven minutes of clock and ended with a seven-yard touchdown run from Woolfolk.

The Black Knights dominated the time-of-possession in the first half, holding the ball for 23:03 compared to only 6:57 for the Aztecs.