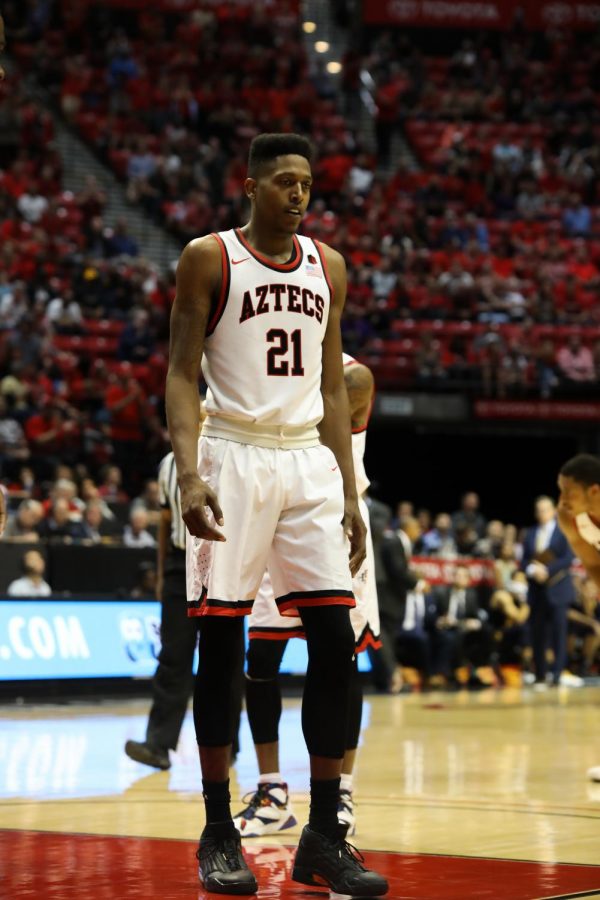 Senior forward Malik Pope during the Aztecs 63-62 loss against University of California, Berkeley, on Dec. 9 at Viejas Arena.

The Aztecs could not keep up with their sharp-shooting conference foe and fell 82-69 to the Cowboys in Laramie, Wyoming.

Wyoming made seven of 12 three-point attempts in the second half, including three from senior forward Hayden Dalton, who finished with a career-high 36 points to go with 12 rebounds, five assists and two blocks.

Dalton, who finished with a game-high five made threes on nine attempts, put the exclamation point on his career night after blocking SDSU senior guard Trey Kell and dunking the ball in transition to give the Cowboys an 80-61 lead with 4:05 to play.

The run included a three-pointer from senior guard Alexander Aka Gorski (six points), a tip-in from Dalton and a made shot for senior forward Alan Herndon (eight points, four rebounds) after a goaltending violation was called on SDSU senior forward Malik Pope.

Pope led the Aztecs in scoring with 21 points — 13 of which came in the first half — to go along with nine rebounds, but missed his final three field goals attempts as the team attempted to come from behind.

The Cowboys started to pull away in earnest after Dalton scored five straight points — an off-balance three and a layup — to finish off a 12-2 run which gave Wyoming a 71-57 lead with 9:54 remaining.

SDSU scored the final five points of the first half after a three pointer from junior guard Devin Watson (13 points, four assists) and a jumper from Pope gave the Aztecs the halftime lead.

Dalton had seventeen points in the first half to lead the Cowboys, nine of which came from the free throw line.

Wyoming made 10 free throws in the first half, as many as the Aztecs took in the period.

Cowboys senior guard Justin James came in averaging 16 points per game, but converted only two of his first 11 shot attempts.

James finished the game with nine points, converting both of his field goal attempts in the second half.

SDSU outrebounded Wyoming 27-17 in the first half, including a nine to three advantage on the offensive glass.

The Cowboys closed the gap in the second half, out-rebounding the Aztecs 18-13 after the break.

The loss ended a three-game winning streak for the Aztecs against the Cowboys, dating back to the 2015-16 season.