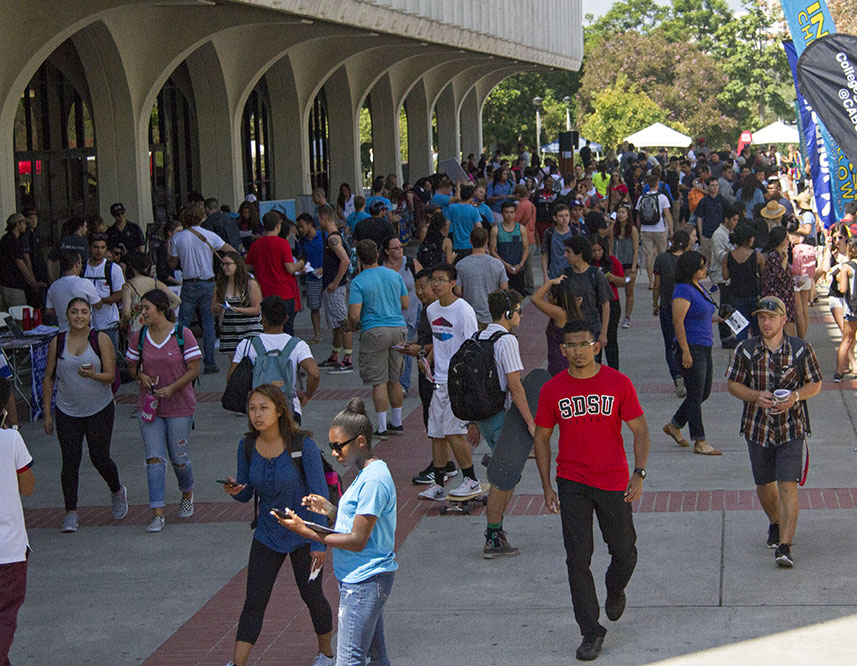 Students crowd the sidewalk in front of Love Library at the start of the Fall 2016 semester.

San Diego State University has set a new record for the number of undergraduate applications again.

Prospective undergraduate students sent 93,610 applications for fall 2018 to SDSU’s admissions office — the first time applications have ever gone over 90,000 and the third year in a row with application numbers above 80,000.

First-time freshmen made up a total of 68,475 applicants, while transfer students submitted 25,135 applications.

More than 3,000 graduate applications have also been received, creating a total of more than 96,000 applications for next year. The grand total is expected to increase due to graduate programs that are still accepting applications.

For the last decade, the university has been breaking records for application numbers almost every year.

“This robust interest in SDSU reflects the excellence of our academic and research programs and our national reputation,” University President Sally Roush said in a press release last month.

“San Diego is a nicer city than L.A.,” Luttrell said. “It’s got all the amenities of a city without being massively overcrowded.”

Luttrell said people feel they need higher education more than ever because the job market has become more challenging.

“Also, because it’s a public school, it’s cheaper than the private schools,” Luttrell said. “People are strapped for cash.”

Non-local students made up a slight majority — 54 percent — of new students at SDSU in the fall 2017 semester. Students are considered non-local if they graduated from a high school outside of SDSU’s “service area,” defined as San Diego County south of state Route 56 and all of Imperial County

The percentage of non-local students is lower at many other CSU campuses.

Public administration senior Eduardo Roji, a San Diego native, said he believes SDSU’s growing academic clout, in addition to its attractive location, is what’s behind the increase in applications.

“Besides the fact that we’re in San Diego,” Roji said, “I believe this is happening because I feel like we’re getting more recognition academically in our programs, especially in business, marketing and all that.

But there are drawbacks to such high numbers of applicants.

“All our majors majors are impacted,” Roji said. “I feel like it’s getting even harder and harder to get the classes you need to graduate by your goal. It just becomes a harder process for everyone. Maybe we have to have a lower admissions rate and have higher prerequisites to getting in.”

Accounting junior Mirna Sabri applied to other CSU campuses, but wasn’t planning on attending any of them because SDSU was her number one choice.

“It’s close to home and it has a good business program,” Sabri said.  “The weather here is really good, the tuition is not as bad as a (University of California campus) and also it’s not like UCSD. UCSD is more dead and we’re more open and we have stuff going on. There’s a way more social environment so if you’d have to choose between UCSD or SDSU, you’d choose SDSU.”

She also believes that the university should not increase the number of prospective students that it accepts, despite the increase in applications.

“I don’t think it should (increase) because it’s going to affect the classes. If they’re willing to open more classes, then why not?”

The most popular majors among freshman applicants were biology, business, nursing and psychology.

U.S. News & World Report ranks SDSU among the top 10 colleges by applications and No. 68 among public universities for academics.

Applicants can expect to receive acceptance notifications from SDSU in March.