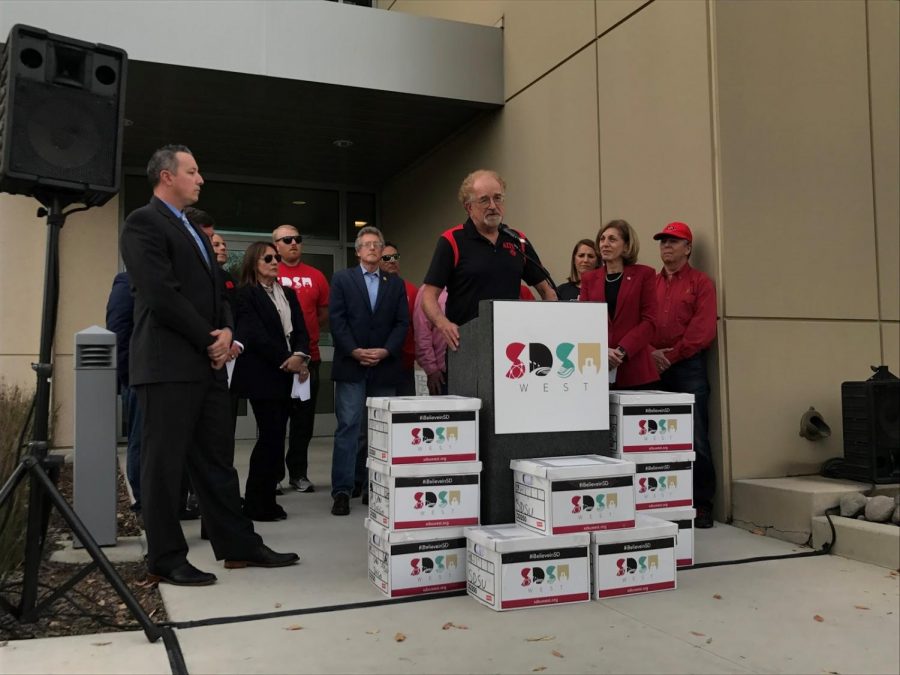 San Diego State’s effort to expand into Mission Valley took another step forward this week when supporters turned in more than 100,000 signatures to the county.

The group, “Friends of SDSU,” has been working for months to draw up and submit a plan to compete with another initiative — SoccerCity — in time to qualify for the November ballot.

“Supporters have successfully gathered many more than the required 71,646 signatures,” said Kim Kilkenny, a member of the Friends of SDSU Steering Committee, in a press release. “Once verified, these signatures will qualify SDSU West for the 2018 ballot.”

Fred Pierce, another member of the steering committee, said at a signature turn-in media event Tuesday that the SDSU West initiative is meant to be an direct alternative to SoccerCity.

The SoccerCity initiative would have the same SDCCU Stadium site turned into a mixed-use commercial and residential zone anchored by a Major League Soccer stadium.

“One of the important elements of this milestone is that the citizens of San Diego deserve an alternate plan, and that’s what SDSU West provides,” Friends of SDSU Steering Committee member Fred Pierce said.

If the initiative is passed by San Diego voters, SDSU West will include a new stadium for the university’s football team as well as classroom and residential buildings.

While the organization had originally intended to turn in their signatures last week, they delayed it to Jan. 16, citing volunteer scheduling issues and heavy rain.

But SoccerCity spokesperson Rachel Laing said she believes this delay was due to SDSU West not meeting their signature goal as they claimed.

SDSU West announced they had met their signature goal on Dec. 29, but continued to collect signatures up until the turn-in date.

“It only took us 12 days to collect the 100,000 signatures and we believe it’s due to the tremendous enthusiasm for what SoccerCity offers,” Laing said.

Kilkenny said the continued signature gathering was to establish a “safety net” while the campaign did their own internal validation process, which he said can be very time consuming. However, Laing said she is skeptical of the campaign’s truthfulness regarding the number of signatures they’ve collected.

The SDSU West campaign needs 71,646 signatures from registered voters to qualify for the November 2018 ballot, and they’ve been canvassing for signatures since October.

Laing said Soccer City, the competing initiative, secured their ballot spot in March after fewer than two weeks of canvassing.

Kilkenny said he does not believe the time it took each campaign to collect the necessary signatures is indicative of the public’s relative enthusiasm towards each initiative.

“Before it can be placed on the ballot, it is not a race to see who can collect the most signatures and how quickly that occurs,” Kilkenny said. “The response, at every level, to our initiative has been very enthusiastic.”

Now that the signatures have been submitted, the Registrar of Voters will validate that the campaign has collected the minimum number of signatures to qualify. The signatures then go to the San Diego city clerk to certify the ballot measure. After that, the city council is notified, allowing them to either vote on the measure directly or place the measure on the ballot for a public vote.

“Technically, the council has the authority to go ahead and adopt provisions of the initiative directly without placing it on the ballot, but we aren’t asking for that,” Kilkenny said. “We want it to go to a public vote.”

Kilkenny said the SDSU West initiative was intentionally crafted in a way that would ensure they are on the same ballot as SoccerCity because the campaign wants to go “head-to-head.”

“The idea is that it will confuse voters and cause both initiatives to fail,” Laing said. “We think San Diego’s voters are smarter than that and they will take a good hard look at both initiatives and when they do they will find that (SoccerCity) is better for the taxpayers, SDSU and for the citizens in every way.”

Supporters of SDSU West say their measure is a necessary move to improve San Diego State as well as the local economy.

“SDSU’s current campus of 238 acres is not nearly enough for this growing university,” Bry said. “In comparison, UCSD in my district has about 5 times more acres. A major factor of UCSD’s success was the city’s sale of pueblo lands to the university, providing UCSD the ability to expand and become the economic generator that it has. We have the same opportunity now in Mission Valley for San Diego State University with SDSU West.”